28 Jun 2020 – In a time of quarantine, isolation and anxiety, most literate isolates already have plowed through Decline & Fall, War & Peace, the complete set of Shakespeare’s dramas, and the Iliad. So, now the choice is between you and Paradise Lost – which is not everybody’s cup of tea. Widespread social disorder can be the expression of various conditions: civil war, sectarian strife, economic collapse, natural disasters, external incursions, etc. All of these situations are explicable by the application of some kind of causal logic.

Edward Snowden’s book is not a ‘coming-of-age’ saga. It is necessary to say that at the outset. One of the peculiarities of our times is the penchant for rendering everything in terms of so-called ‘human interest.’ The most profound events, the most penetrating analysis, the most stirring ideas – all are reduced to personality. Whether it is the personality of the author, a representation of the subject, or some background character.

23 May 2020 – Hacking is back in the headlines. The Chinese are accused of breaking into the computers of unnamed American labs – corporate &/or non-corporate – doing research on a coronavirus vaccine. The operative words are ‘China/Chinese’ and ‘hacking’. The two go together like gin & tonic.

14 Apr 2020 – Overriding all else is the spectacle of a President, DULY ELECTED BY THE AMERICAN PEOPLE, who is a malicious psychopath with not a single redeeming trait. A physical, intellectual and emotional spectre, he has gathered around him a witch’s coven of scoundrels, crooks and crackpots as bereft of mind and ethics as he is. This man is viewed favorably by 46% of the public. THAT REALITY ECLIPSES EVERYTHING ELSE. What Have We Learned? 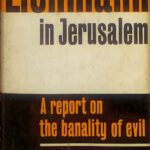 Hannah Arendt, who originated the term “banality of evil” in her provocative writings, was not interested in explaining Eichmann’s blandness per se. She had more profound thoughts to convey. He was a symbol of something much deeper. Her forcefully argued conclusions that ordinary people can commit horrific crimes created a furor – a blazing fire of argument and recrimination whose embers smoldered for decades.

If America in the late eighteenth century was born against others’ history, Western Europe in the mid-twentieth century succeeded in liberating itself from its own history.

12 Oct 2019 – Here we are again: a major series of events in the Middle East accompanied by thin and misleading MSM coverage. It is the background, context and interpretation of implications that are distorted and prejudiced; also, spiked with a drizzle of lies. Par for the course.

‘Negotiated truth’ has become the standard currency. Robert Mueller’s manner of handling his relations with the Department of Justice fits the pattern. In declaring that William Barr’s gross misrepresentations of his report’s conclusion were ‘well intentioned,’ while making it obvious that Trump had obstructed justice, is a prime example. In this instance, Mueller negotiated the truth among his sense of professional duty, his conscience and his keen desire to maintain a certain standing among his fellow Republicans. In the end, he tilted toward the last while hiding behind the first. Par for the course.

29 May 2019 – The U.S. Department of State is offering a grant of $75 million to non-government-organizations to help it to further meddle in Syria. Americans have intoxicated themselves for two and a half years on the vapors emanating from the alleged Russian ‘interference’ in the 2016 election affair–never proven. The strongest odor, if one bothers to inhale, is from the stench of hypocrisy.

18 May 2019 – Before embarking on an etymological exploration, a few prefatory remarks are in order. One, neo-conservativism is as much a state of feeling as it is a state-of-mind. Two, such logical thinking as occurs among its devotees is deductive – downplaying empirical data and encouraging ad hominem conclusions and pronouncements. Finally, it is a highly adulterated species of doctrine. It has interbred with several other intellectual and ideological entities to produce a hybrid.

When Conquer We Must, When Our Cause It Is Just
Michael Brenner – TRANSCEND Media Service, 13 May 2019

12 May 2019 – Bellicosity pervades Washington’s ruling circles. Cartoon images of the enemy are disseminated everywhere. He is alien and menacing. The target is portrayed as a clear and ‘imminent’ threat to America who is beyond reason. Fictive provocations are conjured up. No evidence is presented to substantiate the claims – it’s speculation rooted it’s super-secret classified Intelligence. To question is to traffic in ‘fake news’ and disinformation, to serve as ‘useful idiot’ who is handmaiden to the terrible trio of Russia, Syria and Iran… Let’s step back a couple of generations to Vietnam.

5 May 2019 – America’s entire political class, its foreign policy community in particular, agrees that Maduro ‘has to go.’ Just as Assad ‘had to go’, Gaddafi ‘had to go,’ and before them Saddam ‘had to go.’ With the Ayatollahs high on the to-do list. The only debate is on the method. Tactics are discussed endlessly on Op Ed pages, on the talk shows, on think tank row without any reference to why he ‘must go’ – with what implications. It’s little different from the agitated post-game yapping about an NBA play-off game: why did team ‘X’ fail to execute their pick-and-roll as planned, why this match-up rather than that, what adjustments will the coach make before the next game.

1 Jan 2019 – Donald Trump experienced an epiphany during his lonesome Christmas at the White House. Riveted by the telecast of the midnight Mass at the Vatican, it came unto him a blinding light that awakened his spirit. The troubled soul of America needed a patriotic version of the Church’s ancient catechism. He set about commissioning a composition modeled on the NICENE CREED and the Roman Catholic Catechism to serve as a devotional paean to America. 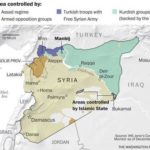 22 Dec 2018 – It is daunting to find polite words for describing American foreign policy- such is its incoherence. Purpose is obscure, logic is invisible. There is no approximation to orderly process – in thought, in deliberation, in decision. These truths have been highlighted by Trump’s stated intention to withdraw (some) American troops from Syria – and by the reaction to it. The harsh reality that it is not the White House alone that lacks anything resembling a strategy in the Middle East. That holds for their critics, too, both inside and outside the government.

The errant actions of the C.I.A. are by now so evident that they are a staple of Washington conversion. Like the weather, though, it is the topic everybody talks about, but does nothing about.