Marcelo and Lula talked about the political situation in Europe, Latin America and the war in Ukraine. 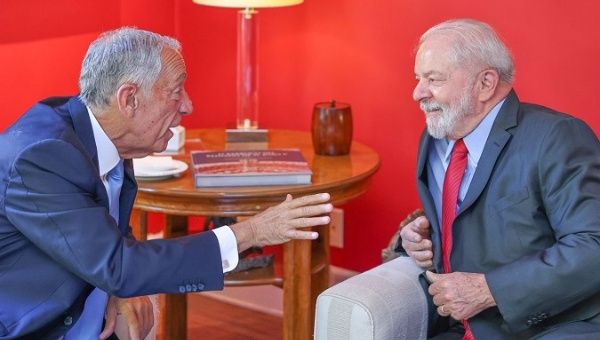 After the announcement of the exchange with Lula, Bolsonaro canceled an official audience he was to have with Pres. de Sousa tomorrow in Brasilia, the Brazilian capital.

Despite this decision, the Portuguese president continued with his agenda and received Lula at the Portuguese consulate in São Paulo, where the former head of state went with his former foreign minister, Celso Amorim, one of those who drafted the chapter on foreign relations to be presented by the current candidate with the highest percentage of voting intentions in the polls, in view of next October’s elections.

After their meeting, de Sousa will make another visit to the São Paulo Book Biennial, whose inauguration he attended on Saturday night and which this year is dedicated to Portugal, for the bicentennial of Brazil’s independence from the Portuguese metropolis, to be celebrated on September 7.

Later, he will hold a meeting with another former Brazilian president, Michel Temer, and will attend a reception at the Portuguese Consulate for members of the Portuguese community living in São Paulo, according to his agenda.

The Presidency has not yet announced whether or not the President will return to Lisbon after Rebelo’s commitments, since the schedule of his visit before arriving in the South American country included a trip to Brasilia on Monday, which finally did not materialize.

Rebelo de Sousa arrived in Brazil on Saturday and made a stopover in Rio de Janeiro, where he attended a ceremony to commemorate the centenary of the first air crossing over the Atlantic Ocean, which took place in 1922 by two Portuguese pilots.

He also dived into the waters of the Atlantic Ocean at Copacabana beach, where he was able to take a stroll prior to the development of the official agenda.

There he talked to the press and gave little importance to Bolsonaro’s decision to cancel Monday’s meeting and said that this fact does not affect the bilateral relationship, since it transcends the governments themselves, when in fact it belongs to the peoples, he said.