The Supreme Awakening – A Review 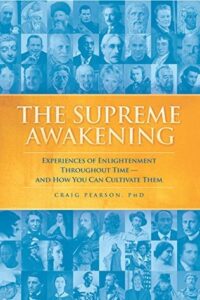 The Supreme Awakening: Experiences of Enlightenment throughout Time — And How You Can Cultivate Them is the ultimate guide to higher states of consciousness. This latest book from Craig Pearson presents inspiring experiences from mystics and saints and shows us how we ourselves can live these states permanently in enlightenment.

A Sampling from the Anthology:

“There comes a time … when the … brain is stilled. It does not cease from its natural and joyful activities. But it ceases from that terrified and joyless quest which was inevitable to it as long as its own existence, its own foundation, its own affiliation to the everlasting Being was in question and in doubt. The Man at last lets Thoughts go: he glides past the feeling into the very identity itself, where a glorious all-consciousness leaves no room for separate self-thoughts or emotions. … [A]nd so there comes to him a sense of absolute repose, a consciousness of immense and universal power, such as completely transforms the world for him. … [y]ou come at length to a region of consciousness below or behind thought … a consciousness of quasi-universal quality, and a realization of an altogether vaster self than that to which we are accustomed. … To experience all this with any degree of fullness, is to know that you have passed through Death: because whatever destruction physical death may bring to your local senses and faculties, you know that it will not affect that deeper Self.“

“[I]n some peculiar way my consciousness seemed to have expanded until it was present in a general way, far beyond even this planet. I was aware of no specific details of anywhere beyond my immediate vicinity, but I was a vastness somehow, that in no way contradicted or conflicted with my limited individuality. Subject and object had become one — had fused, in some way. There was the objective world around me … but now … there was a vast ‘plus.’ I was both my individual self and in some greater way, ‘I’ was also everything. Not the personal I, but the greater I AM. There were no longer two, only one, I AM.”

Black Elk (USA, 1863-1950), the Sioux medicine man who helped defeat Custer and was injured in the Wounded Knee Massacre, says:

“The first peace, which is the most important, is that which comes within the soul of men when they realize their relationship, their oneness with the universe and all its Powers, and when they realize that at the center of the universe dwells Wakan-Tanka [absolute Being], and that this center is really everywhere, it is within each of us. This is the real Peace, and the others are but reflections of this. The second peace is that which is made between two individuals, and the third is that which is made between two nations. But above all you should understand that there can never be peace between nations until there is first known that true peace which, as I have often said, is within the souls of men.”

Although these seekers were brilliant, most of them lacked a technique for systematically producing the experiences, which as a result were usually seldom and brief, glimpses of enlightenment treasured for a lifetime. Now, Pearson states, the Transcendental Meditation technique is enabling hundreds of thousands of ordinary people around the world to experience higher states of consciousness, not just occasionally but on a regular basis. Their descriptions match those of the mystics and saints. A sampling of similar reports from TM meditators:

“The experience of bliss consciousness has become more clear, intense, and stable not only during Transcendental Meditation but also during activity. Now I find that a soft but strong feeling of blissful evenness is present most of the time in both mind and body. Physically it is expressed as an extremely delightful liveliness throughout the body.

“This evenness is so deep and stable that it is able to maintain its status even in the face of great activity. Even  when faced with great  problems, this blissful evenness of mind and body continues. Every day it grows stronger and more stable. This evenness cushions one against all possible disruptions and makes all activity easy and enjoyable. Every place is heaven when you feel that evenness. One is completely self-sufficient. Nothing can prevent one from having that fabulous inner mental and physical blissfulness.”

A report of unity consciousness:

“Increasingly I experience everything and everyone as nothing other than my own Self. … It seems that Being … is shining and glistening and even smiling at me from the surface of everything. … It’s as if the inner Being, the Self of everything, somehow rises to the surface and makes itself apparent. … With this experience of my own Self in all things, love begins to flow — love without boundaries, without exceptions, without considerations of any sort. Love flows out towards all that I perceive and seems to flow back to me as well.”

A description of permanent enlightenment:

”Relative life’ is still there, but it is eternally and completely cloaked in, saturated by, and imbued with this indescribable, attributeless softness of one’s own eternal Self. When that is the ultimate reality for you, life is just softer, more filled with those most fundamental qualities of creation: beauty, love, sweetness, and wholeness, in a perfectly integrated way — in their finest, most mist-like, indescribable value. It is lovely beyond words. … One begins to see that one is not the body at all, not the limited personality, but something beyond that — something eternal, unchanging, unbounded, removed from the fray of what we used to consider daily life. … Never before had it been so obvious that I have always been, that there is no end to me.”

Pearson presents scientific research showing Transcendental Meditation effectively and regularly produces higher states of consciousness. It creates a pattern of brain waves, hormonal levels, and metabolic rates significantly different from meditations based on concentration and control, which are mental activities and therefore less effective at reaching the non-active state of samadhi, transcendental consciousness, in which the mind is alert and aware but free of thoughts. TM uses a special method of non-concentrative thinking that takes the mind effortlessly to the deeper, silent, unbounded realms. There it becomes suffused with the energy, intelligence, and happiness at the source of our Being and brings these qualities back into the active, thinking dimension, where they enrich our lives and improve our performance.

The Supreme Awakening first inspires us and then shows us how to make this inspiration a reality by becoming enlightened ourselves. Pearson has given us a practical guide to living an exalted life. Chapters are posted HERE.

Anticopyright: Editorials and articles originated on TMS may be freely reprinted, disseminated, translated and used as background material, provided an acknowledgement and link to the source, TMS: The Supreme Awakening – A Review, is included. Thank you.