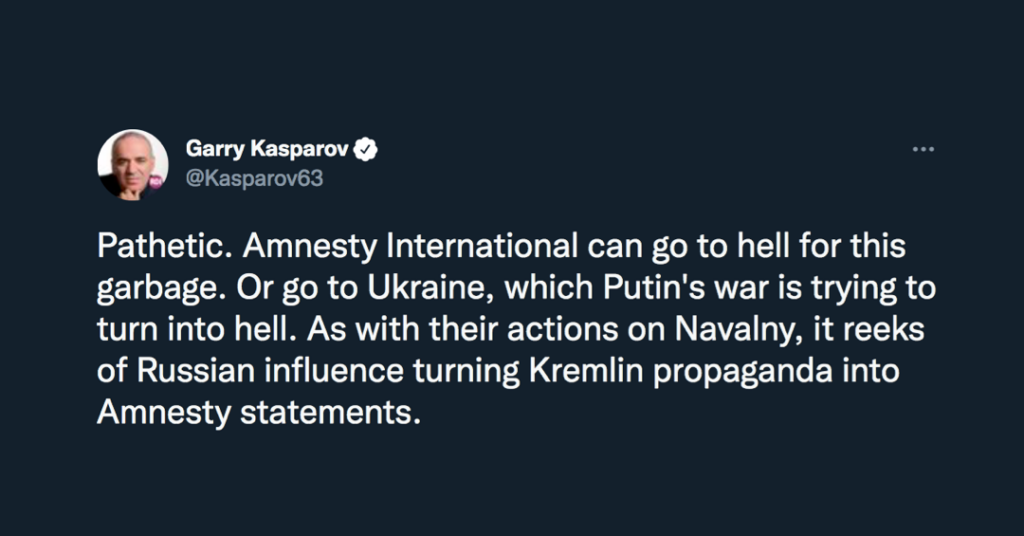 6 Aug 2022 – You can always tell how important narrative control is by watching the way people react when their control of the narrative is jeopardized.

Empire apologists are raging at Amnesty International for pausing its aggressive facilitation of western imperialism to issue one brief criticism of the way Ukrainian forces have been endangering civilian lives with their warfare tactics against the Russian military.

Amnesty is far from the first to highlight this extensively documented issue; that Ukrainian forces have been deliberately positioning themselves in civilian populations without taking proper measures to protect noncombatants is a concern that has been voiced repeatedly since the war began and reported on by both mainstream western news outlets and the United Nations.

Nevertheless, Amnesty’s claim that “Ukrainian forces have put civilians in harm’s way by establishing bases and operating weapons systems in populated residential areas, including in schools and hospitals” has drawn fire from Ukrainian officials, from mass media pundits, from the brainwashed rank-and-file on social media, and from President Zelensky himself.

Incredible seeing Amnesty attacked for documenting what every minimally independent observer has from the start. See e.g. Washington Post, March 28 on "Ukraine’s strategy of placing heavy military equipment and other fortifications in civilian zones." https://t.co/vu3v3UCdIq https://t.co/v0qy2ehVLV

The head of Amnesty International’s Ukrainian branch resigned as a result of the report, saying that “the organization created material that sounded like support for Russian narratives” and that in an effort to protect civilians, “this study became a tool of Russian propaganda.”

“It is a shame that the organization like Amnesty is participating in this disinformation and propaganda campaign,” tweeted Zelensky advisor Mykhailo Podolyak.

“Amnesty International can go to hell for this garbage,” tweeted Human Rights Foundation Chairman Garry Kasparov. “Or go to Ukraine, which Putin’s war is trying to turn into hell. As with their actions on Navalny, it reeks of Russian influence turning Kremlin propaganda into Amnesty statements.”

Pathetic. Amnesty International can go to hell for this garbage. Or go to Ukraine, which Putin's war is trying to turn into hell. As with their actions on Navalny, it reeks of Russian influence turning Kremlin propaganda into Amnesty statements. https://t.co/KOC0S0NJOt

The underlying premise behind these complaints, of course, is that it is Amnesty International’s job to help Ukraine win a propaganda campaign against Russia. Which is odd, because Amnesty’s reporting on the war has actually been overwhelmingly biased in favor of Ukraine this entire time.

“Anger directed at Amnesty is surprising given that it is the first critical piece the group has written on Ukraine since the war began,” reports Unherd. “Over the last six months, Amnesty has published 40 articles on Ukraine, nearly all of which condemn Russia’s invasion, with only one exception — its latest — that could be conceivably described as critical of Ukraine.”

Even the Amnesty report currently sparking all the outrage contains repeated condemnations of Russia’s actions in Ukraine, citing “indiscriminate attacks by Russian forces” and “war crimes” Amnesty has found Russia guilty of committing, as well as decrying the use of “inherently indiscriminate weapons, including internationally banned cluster munitions.”

But even ninety-nine percent loyalty to the official line is not enough for imperial spinmeisters and the empire’s useful idiots. Anything short of 100 percent compliance counts as Russian propaganda.

Zelensky now implies that Amnesty International has now fallen under the spell of Kremlin propaganda for pointing out the obvious that Western press would not report & that is Ukrainian forces have been using civilians as shields.

I myself am accused of being a peddler of Russian propaganda many times per day, and have been for years. This despite my hardly ever consuming Russian media, never receiving a penny from Russia, and never having worked for the Russian government or any other government at any time. Russian media have at times chosen of their own initiative to amplify my work since I have a standing invitation for anyone to do so, but I’m literally just an Australian woman writing her opinions online with her American husband. I only qualify as “Russian propaganda” because I disagree with US foreign policy.

For empire apologists the measure of what constitutes “Russian propaganda” about Ukraine has nothing to do with whether or not what’s being said is true or valid; it’s literally just a question of obedience to one’s government about the decisions it’s been making with regard to that nation.

So the @amnesty basically accused Ukraine of endangering civilians by continuing to resist Russian advances.

The organization gives a huge assist to Russian propaganda.

If the measure of whether something qualifies as propaganda is defined entirely by whether it agrees with one’s government, then that measure is itself propaganda.

That’s exactly what’s happening with criticism of the west’s interventionism in Ukraine. Something doesn’t have to come from Russia to be considered Russian propaganda, and its source doesn’t need to have any connection to the Russian government. It doesn’t even have to be false. All it needs to be is disobedient.

We saw this illustrated this past June when The Guardian published a NATO-backed claim that journalist Aaron Maté was “the most prolific spreader of disinformation” among a “Russia-backed network of Syria conspiracy theorists,” despite being incapable of citing a single false thing in Maté’s Syria reporting, and despite The Guardian having to hastily edit out their “Russia-backed” claim.

We also saw this illustrated this past June in a University of Calgary briefing paper on “disinformation” about the war in Ukraine which warns about “five primary narratives” being circulated online:

2. Portraying NATO as an aggressive alliance using Ukraine as a proxy against Russia

3. Promoting a general mistrust in institutions and elites

4. Suggesting that Ukraine is a fascist state or has extensive fascist influences

There are arguments of varying strengths to be made for every one of those points, but more importantly it is self-evident that all of them are matters of opinion and none of them meet any sane definition of “disinformation”. They also can’t in and of themselves rightly be called either “Russian” or “propaganda”.

“We are moving into a situation where dissent from officially sanctioned opinion can be pathologized & criminalised. Pressures for increasing censorship of dissenting opinion are becoming normalised.” Academics should be resisting this, not assisting it.https://t.co/R1tRb34D6W

Russian propaganda certainly exists, and the Russian government certainly has a vested interest in influencing western thought in its strategic favor to whatever extent it is capable. But its capability is very, very limited, especially compared to the exponentially greater influence that western institutions have over our minds.

Russia has a few trolls and some media outlets that were barely viewed by westerners even before they were banned; the US-centralized empire has the billionaire media, Silicon Valley, Hollywood, and the education system. Comparing the two is like comparing a candle to the sun, and the sun ain’t Russia. But that’s the one whose influence over our minds we’re meant to worry about.

In reality we are swimming in propaganda that is favorable to the US empire our entire lives; it’s so ubiquitous that people don’t even notice it. Claiming your support for US foreign policy on an issue has nothing to do with being propagandized is like someone who was raised in the Westboro Baptist Church claiming it was pure coincidence that he happens to agree with the church on the sinfulness of homosexuality. It pervades our minds and shapes our society, but they want us all freaking out about the virtually nonexistent problem of “Russian propaganda”.

This is a thought-killing dynamic, and it is a major problem. It is not good that propaganda is shoved into our minds manufacturing consent for dangerous escalations between the world’s two greatest nuclear powers while anyone who opposes any part of it is dismissed as a Russian propagandist or a useful idiot of the Kremlin.

The single most under-appreciated aspect of our society is the fact that immensely powerful people are continuously working to manipulate the thoughts we think about our world.https://t.co/s9gIfQGb39

We should be using our minds more at this critical juncture, but these dynamics put in place by imperial narrative managers have instead got us using them a lot less.

A Russian and an American get on a plane in Moscow and get to talking. The Russian says he works for the Kremlin and he’s on his way to go learn American propaganda techniques.