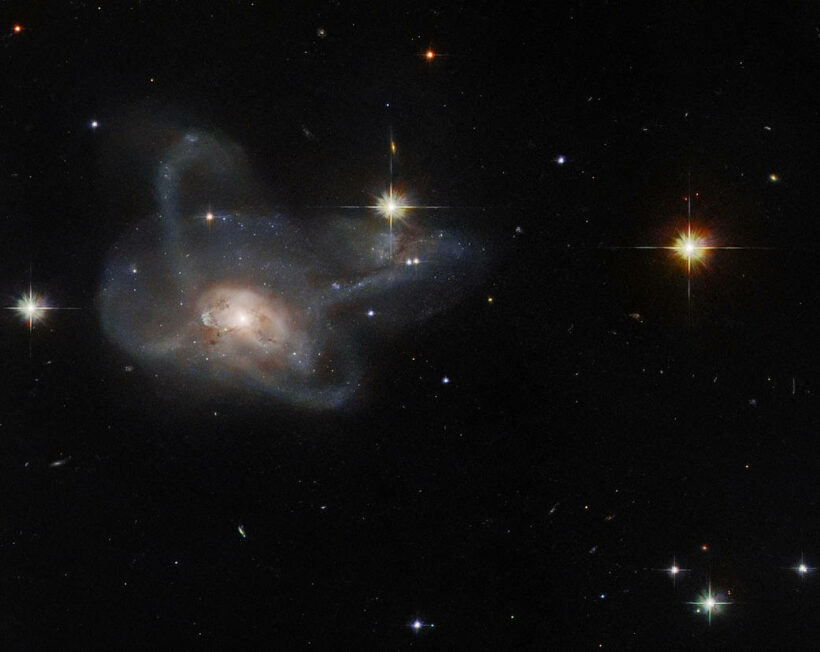 Observation from the NASA / ESA Hubble Space Telescope has captured the galaxy CGCG 396-2, an unusual fusion of multi-armed galaxies located some 520 million light-years from Earth in the constellation Orion. Hubble Spots a Merging Galactic Gem | NASA

12 Aug 2022 –The approaching evolutionary crisis is evidently not a regular evolutionary crisis like the many others in the history of the planet-system. It is the total crisis of an evolutionary path of 4,000 million years. It can be said to be a crisis of the very critical character of the preceding evolution, a crisis of crises. It is difficult to make precise forecasts of the future development of civilisation, but there is one prognosis that seems completely inevitable: in the visible future the constant magnitude acceleration effect of historical time, expressed in terms of the sequence of phase transitions, will come to an end, since we are near the point at which this speed should be formally infinite.

History must pass through the bifurcation point and continue along a completely new path. Our phenomenological analysis gives us no possibility of predicting what that path will be like. This analysis predicts, not so much what will happen, but defines some limitations on the possibilities of prediction, in the sense that it shows what cannot be: it cannot be that, henceforth, the exponential acceleration of evolution will continue.

There will no longer be any effect of the acceleration of historical time, since we are very close to the point at which this speed becomes formally infinite. Now, inevitably, the character of humanity’s evolution must change profoundly, history must pass through the point of Singularity and advance on an entirely new course. For human civilisation the moment of truth has arrived: what will be on this new course will depend entirely on our behaviour.

[…] This makes the mechanism of overcoming this singularity crisis markedly different from previous civilisational crises. In those, evolution always had the possibility of sacrificing the insufficiently flexible sub-systems of civilisation and, taking advantage of the surplus diversity, transferring leadership to the more progressive sub-systems. It can be stated that, reaching the point of polyfurcation, the level of selection moves from the intraplanetary to the galactic, and from that moment on, the competition of the Earth with other cosmic civilisations begins. We are not talking here about direct encounters between civilisations, but the future (or perhaps already existing?) galactic cultural milieu (if such a thing is possible in general) will be shaped by those cosmic civilisations that managed to overcome the singularity point. [1]

Akop Nazaretian analyses three possible scenarios: a downward one, which would be the normal one, and two others: a horizontal and an upward one.

The quasi-stable states towards which the unstable system may tend to change are called attractors.

Three mutually complementary tools were used to analyse the attractors of the coming development of events and the conditions on which the transition of the planetary civilisation towards one or the other attractor may depend.

First, the model of the History of the Universe (megahistory), which covers the maximum retrospective distance achievable today: from the formation of atomic nuclei, galaxies and stars to post-industrial civilisation.

Secondly, the synergetic method (the theory of complexity), which enables an interdisciplinary view of the object of study and helps to reveal the complex mechanism of the intensification and resolution of crises in the different stages of universal evolution.

In the case of degradation, we speak of changes in the direction of the simple attractor, while attractors far from the state of equilibrium… are called strange attractors.

The second principle of Thermodynamics proclaims that all physical processes are accompanied by the growth of entropy. Moving forward into the past we will find more and more organisation in the world, reaching the origin when matter and energy have the maximum possible organisation.

Thus, it was concluded that progressive development is illusory, as it contradicts the laws of nature.

The telic interpretation (inherent in the absolute) of synergetic concepts led to superficial analogies such as: the falling of a stone by the action of gravity, or the movement of air masses in the direction of a lower atmospheric pressure.

This corresponds to the degeneration theory which means that the problems of this planet – all of them together or one of them suddenly – eventually exceed the capacity of resolution and a situation of collapse of the global planetary system occurs. 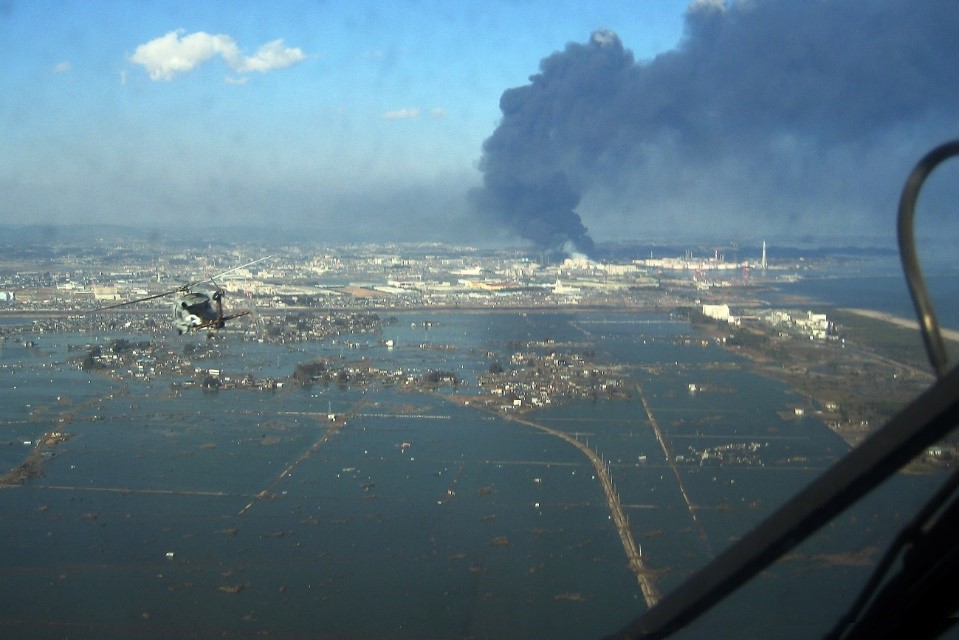 View of Sendai, flooded after the Fukushima earthquake and subsequent tsunami, 2011.

Megahistory uses expressions such as endo-exogenous crisis, exhaustion of the linear growth of anti-entropic activity or polyfurcation phase to refer to this point, where the system needs to break free from the obsolete conditions in which it finds itself.

Two strange attractors appear at this point: the horizontal and the upward vertical.

The two middle-aged men, the expansive Italian-American from Ohio and the phlegmatic Moscow native, were practical boys. Sitting at the restaurant table, they did not philosophise about friendship between peoples, but they did, eagerly and rightly, SAVE THE CIVILISATION OF THE PLANET EARTH. They discussed mutual compromises that would stop the invasion of American troops into Cuba (where forty thousand Soviet troops were stationed and the assembly of 42 nuclear-tipped missiles had been virtually completed), the ensuing occupation of West Berlin (controlled by American, British and French troops) by Soviet tanks and, henceforth, the inevitable escalation of the Third (“Cold”) World War into its hot phase. In those crucial weeks the continuity of human civilisation depended on the unveiled efforts of a few dozen (maximum a couple of hundred) people on both sides of the ocean, caught on the edge of events. I have not been able to find another case in history when the fate of mankind was resolved in such a short time (13 days and nights!). Akop Nazaretian. Non-Linear Future.

…in the course of two and a half million years the genus Homo has more than once been on the verge of self-destruction – which the inhabitants of the Olduvai Gorge came close to – or faced such a depletion of available resources as to make their continued existence problematic. Many tribes and social oases fell victim to their short-sighted activity. Why all these catastrophes have so far not ended in suicide, on a global scale, is a real mystery; and until it is solved, it is premature to discuss the future of world civilisation.[4] The future of world civilisation is premature.

Underlying this trend is an unprecedented evolutionary stagnation.

A horizontal strange attractor, in turn, implies the inclusion of some stabilisation mechanisms (“suspension”, “freezing”?) at a sufficiently high synergetic level and in a long-term perspective; in a sense, this is also the “end of history”, since, by ceasing to develop progressively, the intelligence carrier limits its capacity to control large-scale processes and becomes a prisoner of the natural ageing tendencies of biota, the Earth, the Sun, etc. [5]

In a world where the virtual is replacing the tangible world. Interaction with the perceptual world is gradually being lost. What really matters is in the cloud. The concept of what is considered real is changing. 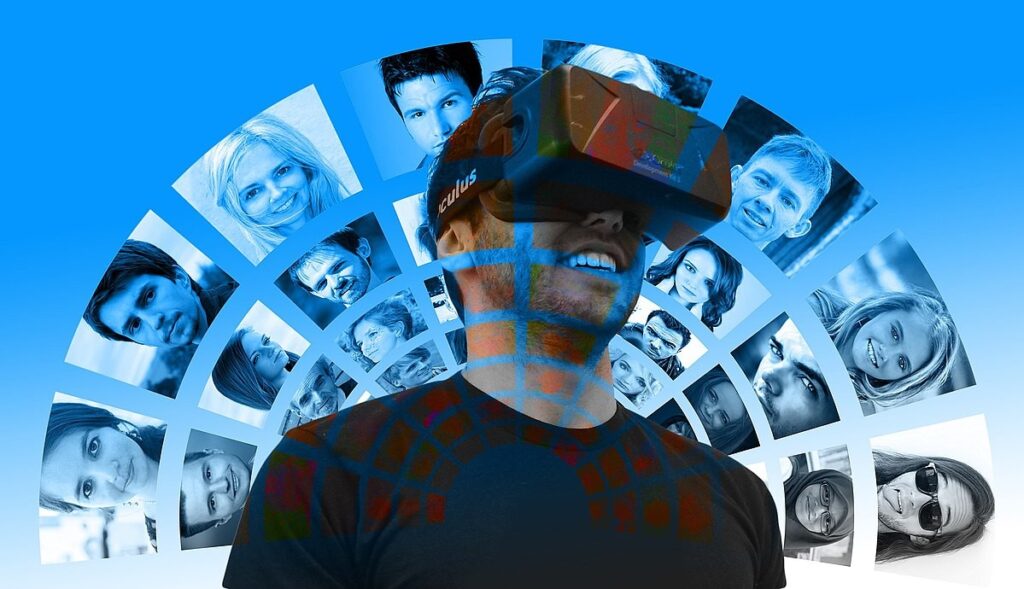 The possibility of the horizontal vector as an outcome does not seem to be able to be prolonged indefinitely in time. Nazaretian considered it unstable, while A. Korotaiev or R. Kruzweil and in part A. Panov are in favour of this possibility. Panov is in favour of this outcome in the face of the Singularity (or in the post-singular stage).

…there is no reason, after Kurzweil, to expect an unprecedented acceleration (by many orders of magnitude) of the rates of technological development. There is all the more reason to interpret this point as an indication of a inflection point after which the pace of global evolution will begin to slow down systematically in the long run.[6]

Alexander Panov is inclined to think that the curve reflecting the trajectory of planetary evolution will take a logistic shape; that is, as it approaches the calculated singularity, the line will smoothly become a horizontal one. […]It was tacitly assumed that, by mid-century, the advance of science and the technologies based on it will enable global problems to be solved without the costs that in previous history invariably accompanied the overcoming of crises. As a result, civilisation will enter a phase of sustained, long-term self-regulation [Panov 2007, 2009]. [7]

In reality, this tendency is not so strange, but has manifested itself on many occasions throughout the evolutionary process. In fact, one might wonder whether it is not always at work. Where simple thermodynamics sees chaos or stagnation, megahistory observes a growing process. At each phase transition the upward attractor appears, otherwise the crisis would have meant the end of the evolutionary process or the maintenance of the system in question in a crystallised state. 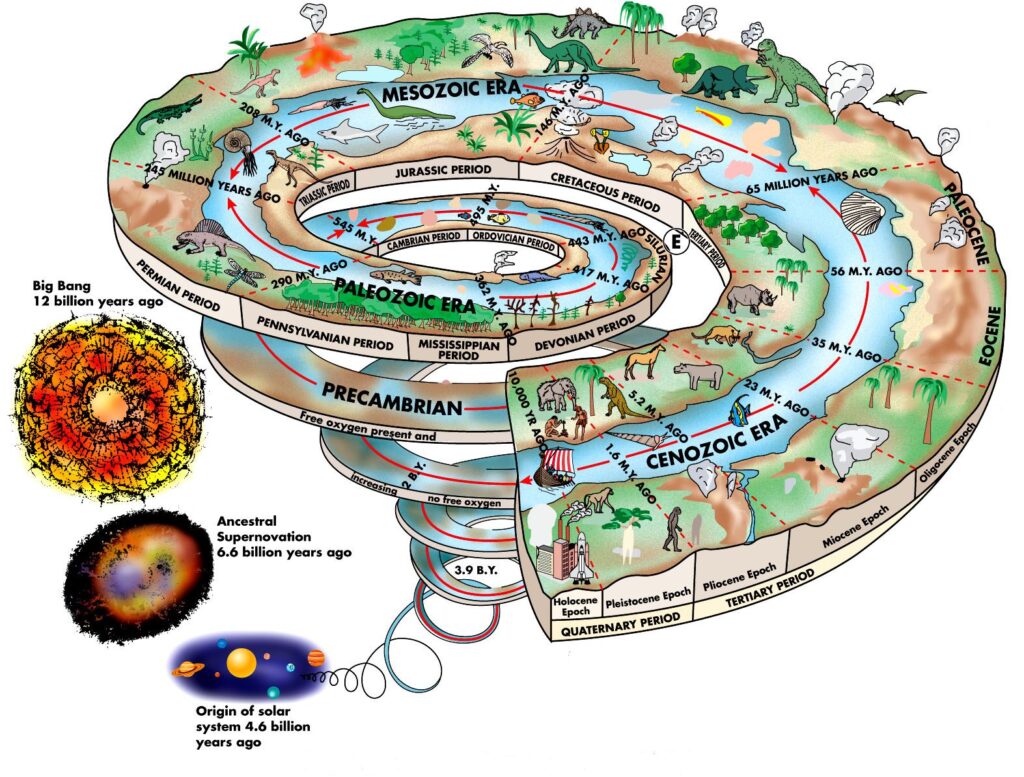 Chaisson (2001) referred to the third attractor as the cosmological arrow of time.

The accumulated data on some crucial episodes correspond exactly to the scenario of endo-exogenous crises. As following a synergistic score was “performed”, for example, the transition from the Lower to the Upper Proterozoic (Neoproterozoic revolution) more than 1.5 billion years ago, which we mentioned when discussing the law of delayed dysfunction and the rule of redundant variety.[8] The third attractor is the third attractor.

Comparing the probabilistic calculations of the Singularity with the scheme developed by Silo, the present civilisation is at the limit of the end of the second period of the evolution of life on the planet, or, alternatively, at the threshold of the third period.

The interest of a new look is that of a broadening of consciousness, capable of leaving the system of determinisms given on a smaller scale.

The issue goes beyond knowing certain dates, it is also a matter of training the look in order to bring the current pre-singularity situation into co-presence. This points to the supra-consciousness that must already be operating at some level.

It is possible that an act launched in search of meaning is occurring on the planet, an act that tends to compensate for the Singularity. We will analyse this hypothesis in Part 3.

[3] Vladimir Arnold, author of the mathematical theory of catastrophes. Quoted in Furuto No-Lineal.

[6] A. Korotayev. In the study: The 21st Century Singularity and its Big History Implications: A re-analysis, (in www.researchgate.net) Korotayev exposes his postulates with much mathematical support, in consonance with Kruzweil but distanced from Nazaretian’s synergetic vision and evolutionary psychology.