An Open letter to Mrs Olena Zelenska from Roger Waters

My heart bleeds for you and all the Ukrainian and Russian families, devastated by the terrible war in Ukraine. I’m in Kansas City, USA. I read an article on BBC.com apparently taken from an interview you have already recorded for a program called Sunday with Laura Kuenssburg which broadcasted on the BBC on September 4th.

BBC.com quotes you as saying that if support for Ukraine is strong the crisis will be shorter. Hmmm? I guess that might depend on what you mean by “support for Ukraine?” If by “support for Ukraine,” you mean the West continuing to supply arms to the Kiev government’s armies, I fear you may be tragically mistaken. Throwing fuel, in the form of armaments, into a firefight, has never worked to shorten a war in the past, and it won’t work now, particularly because, in this case, most of the fuel is (a) being thrown into the fire from Washington DC, which is at a relatively safe distance from the conflagration, and (b) because the “fuel throwers” have already declared an interest in the war going on for as long as possible.

People like you and me actually want peace in Ukraine, don’t want the outcome to be that you have to fight  to the last Ukrainian life – and possibly even, if the worst comes to the worst, to the last human life.

If we, instead, wish to achieve a different outcome we may have to seek a different route and that route may lie in your husband’s previously stated good intentions.

He stood on the election platform of the following promises.

One can only assume that your husband’s electoral policies didn’t sit well with certain political factions in Kiev and that those factions persuaded your husband to diametrically change course ignoring the people’s mandate. Sadly, your old man agreed to those totalitarian, anti-democratic dismissals of the will of the Ukrainian people, and the forces of extreme nationalism that had lurked, malevolent, in the shadows, have, since then, ruled the Ukraine. They have, also since then, crossed any number of red lines that had been set out quite clearly over a number of years by your neighbors the Russian Federation and in consequence they, the extreme nationalists, have set your country on the path to this disastrous war.

If I’m wrong, please help me to understand how?

If I’m not wrong, please help me in my honest endeavors to persuade our leaders to stop the slaughter, the slaughter which serves only the interests of the ruling classes and extreme nationalists both here in the West, and in your beautiful country, at the expense of the rest of us ordinary people both here in the West, and in the Ukraine, and in fact ordinary people everywhere all over the world.

Might it not be better to demand the implementation of your husband’s election promises and put an end to this deadly war? 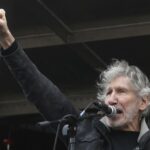 Roger Waters, an activist and human rights advocate, was the singer, songwriter and bassist for the British rock band Pink Floyd. He also has had an extensive solo career.

Olena Volodymyrivna Zelenska is a Ukrainian screenwriter and the First Lady of Ukraine as the wife of current President Volodymyr Zelensky. In December 2019, she was included in the list of the 100 most influential Ukrainians by Focus magazine, taking 30th place. Wikipedia

Anticopyright: Editorials and articles originated on TMS may be freely reprinted, disseminated, translated and used as background material, provided an acknowledgement and link to the source, TMS: An Open letter to Mrs Olena Zelenska from Roger Waters, is included. Thank you.