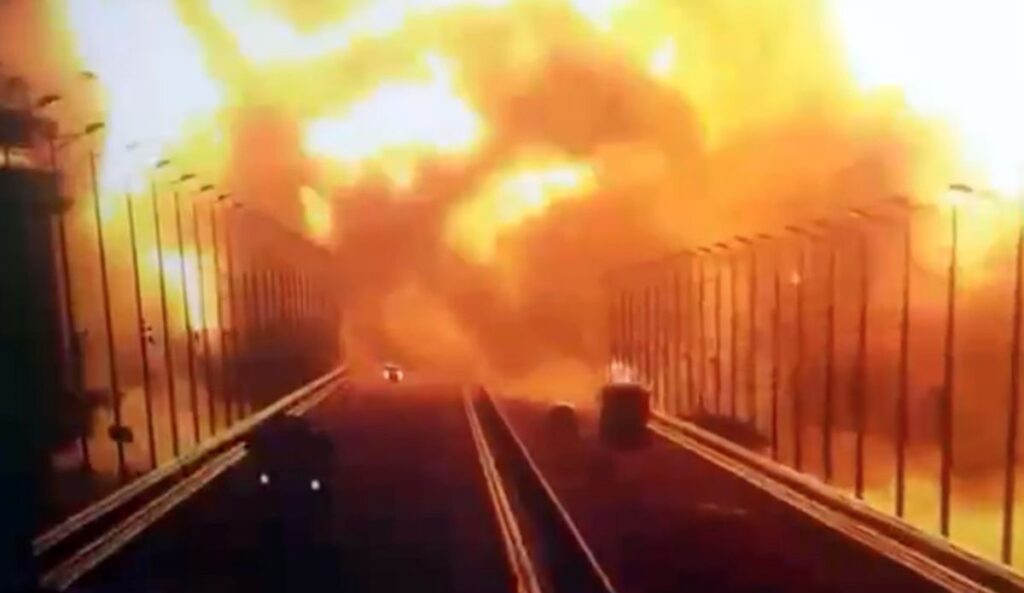 11 Oct 2022 – On 11 Mar 2022, President Biden reassured the American public and the world that the United States and its NATO allies were not at war with Russia. “We will not fight a war with Russia in Ukraine,” said Biden. “Direct conflict between NATO and Russia is World War III, something we must strive to prevent.”

It is widely acknowledged that U.S. and NATO officers are now fully involved in Ukraine’s operational war planning, aided by a broad range of U.S. intelligence gathering and analysis to exploit Russia’s military vulnerabilities, while Ukrainian forces are armed with U.S. and NATO weapons and trained up to the standards of other NATO countries.

On October 5, Nikolay Patrushev, the head of Russia’s Security Council, recognized that Russia is now fighting NATO in Ukraine. Meanwhile, President Putin has reminded the world that Russia has nuclear weapons and is prepared to use them “when the very existence of the state is put under threat,” as Russia’s official nuclear weapons doctrine declared in June 2020.

It seems likely that, under that doctrine, Russia’s leaders would interpret losing a war to the United States and NATO on their own borders as meeting the threshold for the use of nuclear weapons.

President Biden acknowledged on October 6 that Putin is “not joking” and that it would be difficult for Russia to use a “tactical” nuclear weapon “and not end up with Armageddon.” Biden assessed the danger of a full-scale nuclear war as higher than at any time since the Cuban missile crisis in 1962.

Yet despite voicing the possibility of an existential threat to our survival, Biden was not issuing a public warning to the American people and the world, nor announcing any change in U.S. policy. Bizarrely, the president was instead discussing the prospect of nuclear war with his political party’s financial backers during an election fundraiser at the home of media mogul James Murdoch, with surprised corporate media reporters listening in.

In an NPR report about the danger of nuclear war over Ukraine, Matthew Bunn, a nuclear weapons expert at Harvard University, estimated the chance of Russia using a nuclear weapon at 10 to 20 percent.

How have we gone from ruling out direct U.S. and NATO involvement in the war to U.S. involvement in all aspects of the war except for the bleeding and dying, with an estimated 10 to 20 percent chance of nuclear war? Bunn made that estimate shortly before the sabotage of the Kerch Strait Bridge to Crimea. What odds will he project a few months from now if both sides keep matching each other’s escalations with further escalation?

The irresolvable dilemma facing Western leaders is that this is a no-win situation. How can they militarily defeat Russia, when it possesses 6,000 nuclear warheads and its military doctrine explicitly states that it will use them before it will accept an existential military defeat?

And yet that is what the intensifying Western role in Ukraine now explicitly aims to achieve. This leaves U.S. and NATO policy, and thus our very existence, hanging by a thin thread: the hope that Putin is bluffing, despite explicit warnings that he is not. CIA Director William Burns, Director of National Intelligence Avril Haines and the director of the DIA (Defense Intelligence Agency), Lieutenant General Scott Berrier, have all warned that we should not take this danger lightly.

The danger of relentless escalation toward Armageddon is what both sides faced throughout the Cold War, which is why, after the wake-up call of the Cuban missile crisis in 1962, dangerous brinkmanship gave way to a framework of nuclear arms control agreements and safeguard mechanisms to prevent proxy wars and military alliances spiraling into a world-ending nuclear war. Even with those safeguards in place, there were still many close calls – but without them, we would probably not be here to write about it.

Today, the situation is made more dangerous by the dismantling of those nuclear arms treaties and safeguards. It is also exacerbated, whether either side intends it or not, by the twelve-to-one imbalance between U.S. and Russian military spending, which leaves Russia with more limited conventional military options and a greater reliance on nuclear ones.

But there have always been alternatives to the relentless escalation of this war by both sides that has brought us to this pass. In April, Western officials took a fateful step when they persuaded President Zelenskyy to abandon Turkish- and Israeli-brokered negotiations with Russia that had produced a promising 15-point framework for a ceasefire, a Russian withdrawal and a neutral future for Ukraine.

That agreement would have required Western countries to provide security guarantees to Ukraine, but they refused to be party to it and instead promised Ukraine military support for a long war to try to decisively defeat Russia and recover all the territory Ukraine had lost since 2014.

U.S. Defense Secretary Austin declared that the West’s goal in the war was now to “weaken” Russia to the point that it would no longer have the military power to invade Ukraine again. But if the United States and its allies ever came close to achieving that goal, Russia would surely see such a total military defeat as putting “the very existence of the state under threat,” triggering the use of nuclear weapons under its publicly stated nuclear doctrine.

On May 23rd, the very day that Congress passed a $40 billion aid package for Ukraine, including $24 billion in new military spending, the contradictions and dangers of the new U.S.-NATO war policy in Ukraine finally spurred a critical response from The New York Times Editorial Board. A Times editorial, titled “The Ukraine War is Getting Complicated, and America Is Not Ready,” asked serious, probing questions about the new U.S. policy:

“Is the United States, for example, trying to help bring an end to this conflict, through a settlement that would allow for a sovereign Ukraine and some kind of relationship between the United States and Russia? Or is the United States now trying to weaken Russia permanently? Has the administration’s goal shifted to destabilizing Putin or having him removed? Does the United States intend to hold Putin accountable as a war criminal? Or is the goal to try to avoid a wider war…? Without clarity on these questions, the White House…jeopardizes long-term peace and security on the European continent.”

The NYT editors went on to voice what many have thought but few have dared to say in such a politicized media environment, that the goal of recovering all the territory Ukraine has lost since 2014 is not realistic, and that a war to do so will “inflict untold destruction on Ukraine.” They called on Biden to talk honestly with Zelenskyy about “how much more destruction Ukraine can sustain” and the “limit to how far the United States and NATO will confront Russia.”

A week later, Biden replied to the Times in an Op-Ed titled “What America Will and Will Not Do in Ukraine.” He quoted Zelenskyy saying that the war “will only definitively end through diplomacy,” and wrote that the United States was sending weapons and ammunition so that Ukraine “can fight on the battlefield and be in the strongest possible position at the negotiating table.”

Biden wrote, “We do not seek a war between NATO and Russia.…the United States will not try to bring about [Putin’s] ouster in Moscow.” But he went on to pledge virtually unlimited U.S. support for Ukraine, and he did not answer the more difficult questions the Times asked about the U.S. endgame in Ukraine, the limits to U.S. involvement in the war or how much more devastation Ukraine could sustain.

As the war escalates and the danger of nuclear war increases, these questions remain unanswered. Calls for a speedy end to the war echoed around the UN General Assembly in New York in September, where 66 countries, representing most of the world’s population, urgently called on all sides to restart peace talks.

The greatest danger we face is that their calls will be ignored, and that the U.S. military-industrial complex’s overpaid minions will keep finding ways to incrementally turn up the pressure on Russia, calling its bluff and ignoring its “red lines” as they have since 1991, until they cross the most critical “red line” of all.

If the world’s calls for peace are heard before it is too late and we survive this crisis, the United States and Russia must renew their commitments to arms control and nuclear disarmament, and negotiate how they and other nuclear armed states will destroy their weapons of mass destruction and accede to the Treaty for the Prohibition of Nuclear Weapons, so that we can finally lift this unthinkable and unacceptable danger hanging over our heads.

Anticopyright: Editorials and articles originated on TMS may be freely reprinted, disseminated, translated and used as background material, provided an acknowledgement and link to the source, TMS: Biden’s Broken Promise to Avoid War with Russia May Kill Us All, is included. Thank you.