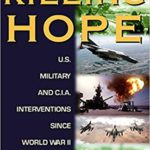 6 Feb 2019 – In his masterpiece, Killing Hope: U.S. Military and C.I.A. Interventions Since World War II, William Blum, who died Dec 2018, wrote accounts of 55 U.S. regime change operations around the world. Noam Chomsky’s blurb on the back says simply, “Far and away the best book on the topic.” We agree. Since Killing Hope was published in 1995, the U.S. has conducted at least 13 more regime change operations.