The Growing Chorus for Peace in Ukraine 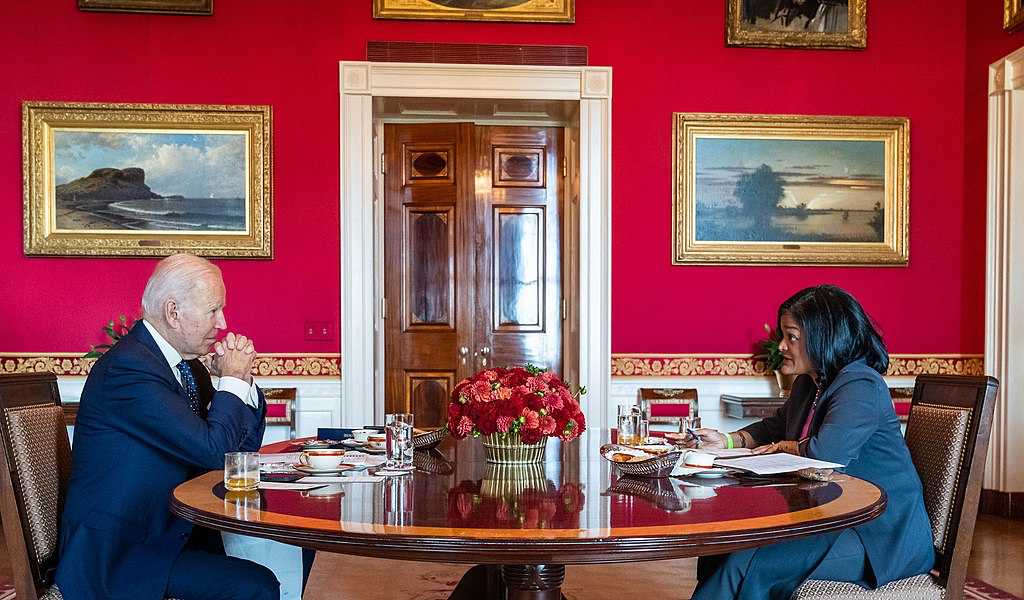 Biden and Jayapal at a negotiating table in October 2021.
Photo credit: The White House

27 Oct 2022 – Ukraine has been wracked by shocking destruction and deadly violence since Russia invaded the country in February. Estimates of the death toll range from a confirmed minimum of 27,577 people, including 6,374 civilians, to over 150,000. The slaughter can only get more horrific as long as all sides, including the United States and its NATO allies, remain committed to war.

In the first weeks of the war, the United States and NATO countries sent weapons to Ukraine to try to prevent Russia from quickly defeating Ukraine’s armed forces and conducting a U.S.-style “regime change” in Kyiv. But since that goal was achieved, the only goals that President Zelenskyy and his Western allies have publicly proclaimed are to recover all of pre-2014 Ukraine and decisively defeat and weaken Russia.

These are aspirational goals at best, which require sacrificing hundreds of thousands, maybe millions, of Ukrainian lives, regardless of the outcome. Even worse, if they should come close to succeeding, they are likely to trigger a nuclear war, making this the all-time epitome of a “no-win predicament.”

At the end of May, President Biden responded to probing questions about the contradictions in his Ukraine policy from the New York Times Editorial Board, replying that the United States was sending weapons so that Ukraine “can fight on the battlefield and be in the strongest possible position at the negotiating table.”

But when Biden wrote that, Ukraine had no position at any negotiating table, thanks mainly to the conditions that Biden and NATO leaders attached to their support. In April, after Ukraine negotiated a15-point peace plan for a ceasefire, a Russian withdrawal and a peaceful future as a neutral country, the United States and United Kingdom refused to provide Ukraine with the security guarantees that were a critical part of the agreement.

As now disgraced British prime minister Boris Johnson told President Zelenskyy in Kyiv on April 9th, the “collective West” was “in it for the long run,” meaning a long war against Russia, but wanted no part in any agreement between Ukraine and Russia.

In May, Russian forces advanced through Donbas, forcing Zelenskyy to admit, by June 2nd, that Russia now controlled 20% of Ukraine’s pre-2014 territory, leaving Ukraine in a weaker, not a stronger position.

Six months after Secretary Austin declared in April that the new goal of the war was to decisively defeat and “weaken” Russia, President Biden is rejecting calls for a new peace initiative. So the United States and United Kingdom had no reservations about intervening to kill peace talks in April, but now that they’ve sold President Zelenskyy on fighting an endless war, Biden insists that he has no say in the matter if Zelenskyy rejects peace negotiations.

But it is axiomatic that wars end at the negotiating table, as Biden acknowledged to the Times. The perennial thorny question for war leaders is “When to negotiate?” The problem is that, when your side seems to be winning, you have little incentive to stop fighting. But when you appear to be losing, there is no incentive to negotiate from a weak position either, as long as you believe that the tide of war will sooner or later shift in your favor and improve your position. That was the hope on which Johnson and Biden convinced Zelenskyy to stake his country’s future in April.

Now Ukraine has launched localized counter-offensives and recovered parts of its territory. Russia has responded by throwing hundreds of thousands of fresh troops into the war and starting to systematically demolish Ukraine’s electricity grid.

The escalating crisis exposes the weakness of Biden’s position. He is gambling with hundreds of thousands of Ukrainian lives, which he has no moral claim over, that Ukraine will somehow be in a stronger military position after a winter of war and power outages, with hundreds of thousands more Russian troops in the areas Russia controls. This is a bet on a much longer war, in which U.S. taxpayers will shell out for thousands of tons of weapons and millions of Ukrainians will die, with no clear endgame short of nuclear war.

Thanks to the moral and intellectual bankruptcy of the U.S. mass media, most Americans have no inkling of the deceptive way that Biden and his bubble-headed British allies cornered Zelenskyy into a suicidal decision to abandon promising peace negotiations in favor of a long war that will destroy his country.

The horrors of the war, the contradictions in Western policy, the blowback on European energy supplies, the specter of famine stalking the Global South and the rising danger of nuclear war are provoking a worldwide chorus of voices urgently calling for peace in Ukraine.

If you’re on a media diet of the thin gruel that passes for news in America these days, you may not have heard the calls for peace from UN Secretary General Guterres, Pope Francis or the leaders of 66 countries speaking at the UN General Assembly in September, representing the majority of the world’s population.

But there are also Americans calling for peace. From across the political spectrum, from retired military officers and diplomats to journalists and academics, there are “adults in the room” who recognize the dangerous contradictions of U.S. policy on Ukraine, and are joining leaders from around the world in calling for diplomacy and peace.

Jack Matlock served as the last U.S. Ambassador to the Soviet Union, from 1987 to 1991, after a 35-year career as a Soviet specialist in the U.S. Foreign Service. Matlock was at the embassy in Moscow during the Cuban missile crisis, where he translated critical messages between Kennedy and Kruschev.

On October 17, 2022, in an article in Responsible Statecraft titled “Why the US must press for a ceasefire in Ukraine,” Ambassador Matlock wrote that as principal arms supplier to Ukraine and the sponsor of the most punitive sanctions on Russia, the United States “is obligated to help find a way out” of this crisis. The article concluded, “Until… the fighting stops, and serious negotiations get underway, the world is headed for an outcome where we all are losers.”

Another veteran U.S. diplomat who has spoken out for diplomacy over Ukraine is Rose Gottemoeller, the Deputy Secretary General of NATO from 2016 to 2019 after she served as President Obama’s senior adviser on arms control, disarmament and nonproliferation. Gottemoeller recently wrote in the Financial Times that she sees no military solution to the crisis in Ukraine, but that “discreet talks” could lead to the kind of “quiet bargain” that resolved the Cuban missile crisis 60 years ago.

On the military side, Admiral Mike Mullen was the Chairman of the Joint Chiefs of Staff from 2007 to 2011. After President Biden chatted at a fundraising party about the war in Ukraine leading to nuclear “Armageddon,” ABC interviewed Mullen about the danger of nuclear war. “I think we need to back off that a little bit and do everything we possibly can to get to the table to resolve this thing,” Mullen replied. “It’s got to end, and usually there are negotiations associated with that. The sooner the better as far as I’m concerned.”

Economist Jeffrey Sachs was the director of the Earth Institute and now the Center for Sustainable Development at Columbia University. He has been a consistent voice for peace in Ukraine ever since the invasion. In a recent article on September 26, titled “The Great Game in Ukraine is Spinning out of Control,” Sachs quoted President Kennedy in June 1963, uttering what Sachs called “the essential truth that can keep us alive today:”

“Above all, while defending our own vital interests, nuclear powers must avert those confrontations which bring an adversary to a choice of either a humiliating retreat or a nuclear war,” said JFK. “To adopt that kind of course in the nuclear age would be evidence only of the bankruptcy of our policy–or of a collective death-wish for the world.”

Sachs concluded, “It is urgent to return to the draft peace agreement between Russia and Ukraine of late March, based on the non-enlargement of NATO… The world’s very survival depends on prudence, diplomacy, and compromise by all sides.”

Even Henry Kissinger, whose own war crimes are well documented, has spoken out on the senselessness of current U.S. policy. Kissinger told the Wall Street Journal in August, “We are at the edge of war with Russia and China on issues which we partly created, without any concept of how this is going to end or what it’s supposed to lead to.”

In the U.S. Congress, after every single Democrat voted for a virtual blank check for arming Ukraine in May, with no provision for peacemaking, Progressive Caucus leader Pramila Jayapal and 29 other progressive Democratic Representatives recently signed a letter to President Biden, urging him to “make vigorous diplomatic efforts in support of a negotiated settlement and ceasefire, engage in direct talks with Russia, explore prospects for a new European security arrangement acceptable to all parties that will allow for a sovereign and independent Ukraine, and, in coordination with our Ukrainian partners, seek a rapid end to the conflict and reiterate this goal as America’s chief priority.”

Unfortunately, the backlash within their own party was so blistering that within 24 hours they withdrew the letter. Siding with calls for peace and diplomacy from all over the world is still not an idea whose time has come in the halls of power in Washington DC.

This is an extremely dangerous moment in history. Americans are waking up to the reality that this war threatens us with the existential danger of nuclear war, a danger most Americans thought we had survived once and for all at the end of the First Cold War. Even if we manage to avoid nuclear war, the impact of a long, bloody war will destroy Ukraine and kill millions of Ukrainians, cause humanitarian catastrophes across the Global South, and trigger a long-lasting global economic crisis.

That will relegate all humanity’s urgent priorities, from tackling the climate crisis to hunger, poverty and disease, to the back-burner for the foreseeable future.

There is an alternative. We can and must resolve this conflict through peaceful diplomacy and negotiation, to end the killing and destruction and let the people of Ukraine live in peace.

Anticopyright: Editorials and articles originated on TMS may be freely reprinted, disseminated, translated and used as background material, provided an acknowledgement and link to the source, TMS: The Growing Chorus for Peace in Ukraine, is included. Thank you.

One Response to “The Growing Chorus for Peace in Ukraine”