Peace Agenda for Ukraine and the World 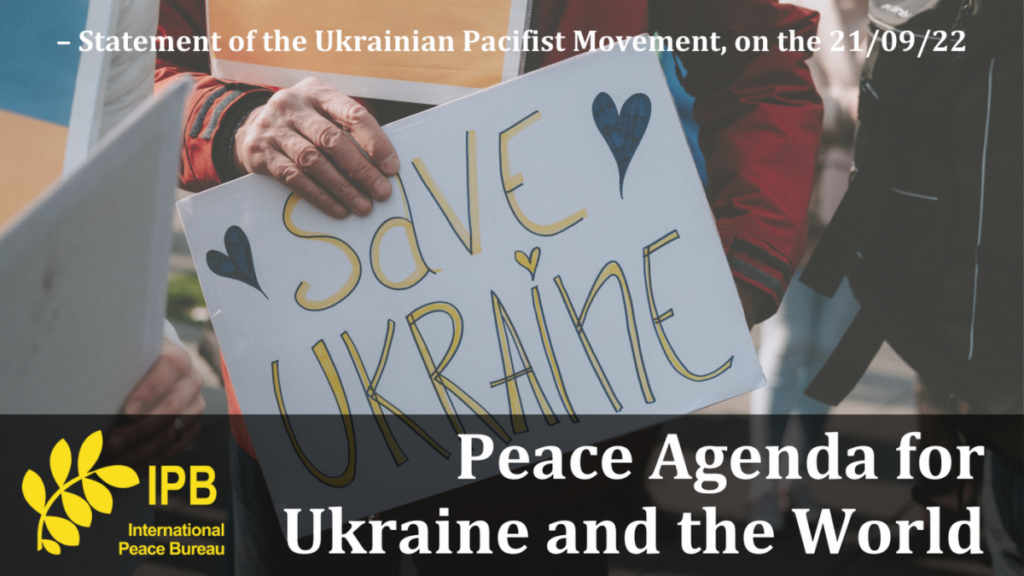 “We the Ukrainian pacifists demand and will strive to end the war by peaceful means and to protect human right to conscientious objection to military service.

Peace, not war, is the norm of human life. War is an organized mass murder. Our sacred duty is that we shall not kill. Today, when the moral compass is being lost everywhere and self-destructive support for war and the military is on the rise, it is especially important for us to maintain common sense, stay true to our non-violent way of life, build peace and support peace-loving people.

Condemning Russian aggression against Ukraine, the UN General Assembly called for an immediate peaceful resolution of the conflict between Russia and Ukraine and emphasized that parties to the conflict must respect human rights and international humanitarian law. We share this position.

Current policies of war until absolute victory and contempt for criticism of human rights defenders is unacceptable and must be changed. What is needed is a ceasefire, peace talks and serious work to correct the tragic mistakes made on both sides of the conflict. Prolongation of the war has catastrophic, deadly consequences, and continues to destroy the welfare of society and environment not only in Ukraine, but throughout the world. Sooner or later, parties will sit at the negotiating table, if not after their reasonable decision, then under the pressure of unbearable suffering and weakening, the last better to be avoided by choosing the diplomatic path.

It is wrong to take the side of any of the warring armies, it is necessary to stand on the side of peace and justice. Self-defense can and should be carried out by non-violent and unarmed methods. Any brutal government is illegitimate, and nothing justifies the oppression of people and bloodshed for the illusory goals of total control or conquest of territories. No one can evade responsibility for his own misdoings by claiming to be a victim of misdoings of others. Wrong and even criminal behavior of any party cannot justify creation of a myth about an enemy with whom it is allegedly impossible to negotiate and who must be destroyed at any cost, including self-destruction. A desire for peace is a natural need of every person, and its expression cannot justify a false association with a mythical enemy.

Human right to conscientious objection to military service in Ukraine was not guaranteed according to international standards even in peacetime, not to mention the current conditions of martial law. The state shamefully avoided for decades and now continues to avoid any serious response to the relevant suggestions of the UN Human Rights Committee and public protests. Although the state cannot derogate this right even in time of war or other public emergency, as says the International Covenant on Civil and Political Rights, the army in Ukraine refuses to respect the universally recognized right to conscientious objection to military service, denying even to replace coercive military service by mobilization with an alternative non-military service according to the direct prescription of the Constitution of Ukraine. Such scandalous disrespect to human rights should have no place under the rule of law.

The state and society must put an end to the despotism and legal nihilism of the Armed Forces of Ukraine, manifested in policies of harassment and criminal punishment for refusal to be engaged in war effort and the forced turn of civilians into soldiers, due to which civilians cannot move freely within the country nor go abroad, even if they have vital needs to rescue from danger, to obtain an education, to find means for living, professional and creative self-realization, etc.

Governments and civil societies of the world appeared to be helpless before the scourge of war, drawn into the funnel of conflict between Ukraine and Russia and wider enmity between NATO countries, Russia and China. Even the threat of destruction of all life on the planet by nuclear weapons had not put an end to the mad arms race, and the budget of the UN, the main institution of peace on Earth, is only 3 billion dollars, while global military expenditures are hundreds of times larger and have exceeded a wild amount of 2 trillion dollars. Due to their inclination to organize mass bloodshed and coerce people to kill, nation states have proven to be incapable of non-violent democratic governance and the performance of their basic functions of protecting life and freedom of people.

In our view, the escalation of armed conflicts in Ukraine and the world are caused by the fact that the existing economic, political and legal systems, education, culture, civil society, mass media, public figures, leaders, scientists, experts, professionals, parents, teachers, medics, thinkers, creative and religious actors are not fully perform their duties of strengthening the norms and values of a non-violent way of life, as envisages the Declaration and Programme of Action on a Culture of Peace, adopted by the UN General Assembly. Evidences of the neglected peace-building duties are the archaic and dangerous practices which must be ended: military patriotic upbringing, compulsory military service, lack of systematic public peace education, propaganda of war in the mass media, support of war by NGOs, reluctance of some human rights defenders to advocate consistently for the full realization of human rights to peace and to conscientious objection to military service. We remind stakeholders of their peace-building duties and will steadfastly insist on compliance with these duties.

We see as goals of our peace movement and all peace movements of the world to uphold human right to refuse to kill, to stop the war in Ukraine and all wars in the world, and to ensure sustainable peace and development for all the people of the planet. To achieve these goals, we will tell the truth about the evil and deception of war, learn and teach practical knowledge about peaceful life without violence or with its minimization, and we will help to the needy, especially those affected by wars and unjust coercion to support army or participation in war.

War is a crime against humanity, therefore, we are determined not to support any kind of war and to strive for the removal of all causes of war.”

The International Peace Bureau is dedicated to the vision of a World without War. Our current main program centers on Disarmament for Sustainable Development and within this, our focus is mainly on the reallocation of military expenditure. We are a Nobel Peace Laureate (1910); over the years, 13 of our officers have been recipients of the Nobel Peace Prize. We believe that by reducing funding for the military sector, significant amounts of money could be released for social projects, domestically or abroad, which could lead to the fulfillment of real human needs and the protection of the environment. At the same time, we support a range of disarmament campaigns and supply data on the economic dimensions of weapons and conflicts. Our campaigning work on nuclear disarmament began already in the 1980s. Our 300 member organizations in 70 countries, together with individual members, form a global network, bringing together knowledge and campaigning experience in a common cause.

One Response to “Peace Agenda for Ukraine and the World”