Kiev demands ‘accelerated’ admission to NATO, but the bloc’s chief insisted that it’s not party to the conflict. 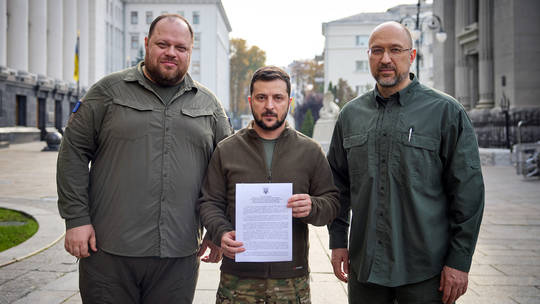 30 Sep 2022 – Ukrainian President Vladimir Zelensky signed an application to join NATO on Friday and demanded an accelerated procedure for admission. While pledging the bloc’s support for Kiev, Secretary General Jens Stoltenberg reiterated that joining would require the consensus of all 30 members.

In a video address, Zelensky said Ukraine was already a “de facto NATO ally” and said he was applying to make it official, calling the ceremonial signing of the application a “decisive step.”

NATO had announced an “unprecedented” address by Stoltenberg after Zelensky’s video, but when the bloc’s secretary general actually appeared he repeated previous talking points.

“NATO is not party to the conflict, but we provide support to Ukraine so it can uphold its right for self-defense enshrined in the UN charter,” Stoltenberg said. “Ours is a defensive alliance. We stand united and determined to defend and protect every NATO ally and every inch of allied territory.”

When asked if NATO was willing to accept Ukraine’s application, Stoltenberg replied that “every democracy in Europe has the right to apply” but getting accepted would require the consensus of all 30 members.

“Our focus now is providing Ukraine immediate support,” he added.

“If Russia stops fighting, there will be peace, if Ukraine stops fighting, it will cease to exist as an independent sovereign nation in Europe,” he added, using a variation on a talking point recently embraced by US Secretary of State Antony Blinken and Zelensky’s wife.

Calling Kiev a “victim of aggression,” Stoltenberg said the bloc must work to “ensure [Russian] President [Vladimir] Putin doesn’t win,” because anything else would tell the world that “authoritarian countries like Russia can use force” to achieve their goals.