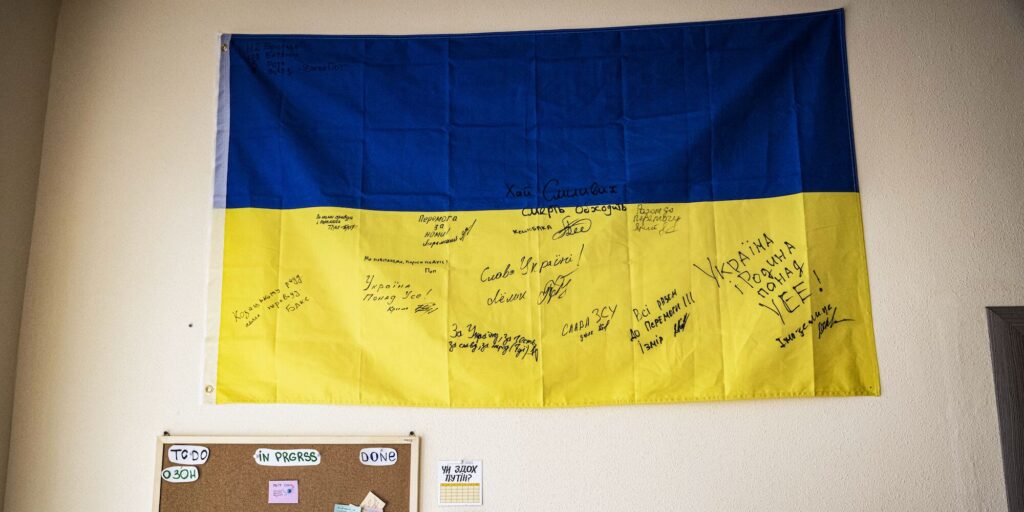 7 Oct 2022 – A Ukrainian human rights organization which has been documenting Russian abuses in Ukraine was awarded the Nobel Peace Prize today. The group, the Center for Civil Liberties, was one of three recipients of this year’s award, which also went to the Russian human rights group Memorial and to the imprisoned Belarus activist Ales Bialiatski.

Last month, The Intercept spoke with Oleksandra Matviichuk, who heads the Center for Civil Liberties. She talked about her group’s effort documenting human rights abuses that began long before Russia’s February invasion of Ukraine, how the international community’s failure to hold Russia accountable for earlier crimes led to the invasion, and why countries that want to support Ukraine should provide military assistance. As she put it:

“What we need today is weapons, and maybe it’s weird to hear that from a human rights lawyer, but I’ll be very honest with you: I have spent 20 years defending human rights, and now I have no legal instrument which has worked in this situation.”

What follows is a transcript of that interview, condensed for length and clarity. Oleksandra Matviichuk: We were the first organization who sent mobile groups when the war started. I mean, when the worst started not in February 2022 but in February 2014, when Russia occupied Crimea, and parts of the Luhansk and Donetsk regions. So we have been documenting war crimes for eight years already. When the large-scale Russian invasion started in February this year, we understood that we were not able to cope with the enormous amount of crimes and document them by our own efforts.

That’s why we restored our volunteer initiative, from Maidan Square, and allowed ordinary people to become volunteers. We use a methodology which I call screening, because it’s not like documentation under international criteria. Ordinary people have no solid knowledge of international humanitarian law or fieldwork, etc. So we elaborated a very simple methodology: We asked people to use our very simple questionnaire, with five questions, and to make a video or audio or written report of testimonies of victims and send this material to us. Because this was very easy to do, we received a lot of stories, very quickly, and contacts of people with whom we can follow up later to ask for more detail.

In parallel, we united our efforts with several dozen organizations, mostly regional ones, into the Tribunal For Putin initiative. This is professional documentation; we use one methodology and one database and work throughout the country to document war crimes and crimes against humanity. We have an ambitious goal: to document each war crime episode in the smallest village in each oblast of Ukraine under Russian attack. Working together for these seven months, we have documented more than 18,000 crimes — and this is just the tip of the iceberg because Russia uses war crimes as a method of war.

Russia tried to break people and to conquer the country by inflicting immense pain on the civilian population. The Russian army intentionally ruins residential buildings, churches, hospitals, schools; they persecute and terrorize civilians in occupied territories by abduction, sexual violence, etc. They use indiscriminate weapons in densely populated areas. They do everything in order to take control over this region.

Alice Speri: Is all this documentation geared toward a future prosecution? Is this done with an eye at a legal process, or is it more about collecting a public record?

OM: I ask this question to myself, for whom are we documenting all these war crimes? Because we’re not historians, we’re not doing this for the national archives. We do it for future justice, and I see a clear gap of accountability. At the current moment, the Office of the General Prosecutor of Ukraine opened more than 32,000 criminal proceedings. It’s obvious that even the most effective national system in the world wouldn’t be able to effectively investigate each episode of these 32,000 criminal proceedings. And we can’t rely upon the International Criminal Court in this regard, because the ICC will limit itself only to several selected cases.

“All this which we have observed in Ukraine is the result of total impunity, which Russia enjoyed for decades.”

So the question is: Who will deliver justice for hundreds of thousands of victims of war crimes? And that’s why we don’t only document war crimes, we do advocacy at the international level. We have to create an international tribunal on war crimes, crimes against humanity, and genocide, and hold Russian perpetrators accountable. Because all this which we have observed in Ukraine is the result of total impunity, which Russia enjoyed for decades, because the Russian army committed the same war crimes in Chechnya, in Moldova, in Georgia, in Mali, in Libya, in Syria — and they have never been punished. And this led to a situation where Russians started to think that they can do whatever they want.

AS: While the focus has been mostly on war crimes and crimes against humanity, there doesn’t seem an avenue yet to prosecute the crime of aggression.

OM: It’s another gap. Ukrainian authorities promote the idea of creating a special tribunal on aggression because the ICC has no jurisdiction on this crime in Ukraine. And this crime is very reasonable. It doesn’t take years to investigate; the fact of the invasion is obvious, the case could be done in months, not years.

We need to have an agreement between states to break this circle of impunity, but also we need to obtain the endorsement of international organization. The better option would be to create such a tribunal in the framework of the United Nations. We need to obtain the majority of votes in the General Assembly. Another variant is to create this tribunal in the framework of the EU, which is also possible because this war is going on in Europe, and this war is not between two countries, but between two systems: between authoritarianism and democracy. We are fighting not only for our freedom, but for the right to have freedom and democracy, for all.

We need to ensure justice, but justice takes time. And when we speak about the creation of additional international mechanisms, it can’t be done tomorrow. So what we need today is weapons, and maybe it’s weird to hear that from a human rights lawyer, but I’ll be very honest with you: I have spent 20 years defending human rights, and now I have no legal instrument which has worked in this situation. The whole U.N. system couldn’t stop Russian atrocities. And first of all, we need to survive. And that’s why we need weapons, and especially long-range weapons, in efficient amounts, because we need to stop Russian troops, and also, we have to de-occupy territories where the horror against civilians is still going on. Now the Ukraine army has liberated the Kharkiv region, and we see they used mass graves in Izium and other cities in the Kharkiv, region, and we see they used torture chambers, where people were tortured, raped, and killed. And what we see now in liberated areas going on right now, in this second, in other territories that are still under Russian occupation.

“What is still lacking in the 21st century is an effective mechanism to bring perpetrators to justice.”

AS: Is Ukraine a test for our international accountability mechanisms?

OM: Ukraine is a chance. The test has already failed, for example, in Syria. They were faced with the same situation, even worse, because their national government did not want to investigate crimes because the Assad regime committed these crimes. But why do I say that Ukraine is a chance? Because when we develop additional mechanisms and hold perpetrators accountable, it will show other authoritarian leaders in the world that such behavior is not tolerated anymore. Ukraine’s lessons can save people’s lives in other countries.

AS: Is there enough support internationally to deliver this accountability?

OM: I’m not a politician or a diplomat, I’m a human rights defender, and that’s why I’m very direct. I don’t see a huge demand for justice at the international level; I see a demand for peace. But the problem is that sustainable peace is not possible in our region without justice. The decades of Russian wars in different countries are proof of this: We need to achieve justice, and then we will be able to have sustainable peace in our region, when we hold Russian perpetrators accountable. And this understanding is very slowly coming to the minds of people who take decisions at the international level and in other countries. And I hope that this perception and this understanding sooner or later will prevail.

One Response to “Ukrainian Nobel Peace Prize Winner: “What We Need Today Is Weapons””