1. Reaffirms its commitment to the sovereignty, independence, unity and territorial integrity of Ukraine and its demand that the Russian Federation immediately cease its use of force against Ukraine and that the Russian Federation immediately, completely and unconditionally withdraw all of its military forces from the territory of Ukraine within its internationally recognized borders, extending to its territorial waters;

Western media report these results as vast international support for the resolution. But measured by world population, this resolution, as well as its predecessors, was decisively rejected by the UNGA. [2]

First, a minor point: the majority of the world’s countries simply did not support this resolution:

99 NOT VOTING IN FAVOR (AGAINST, ABSTENTION or NOT VOTING)

Something much more important to notice is that UN General Assembly votes are extremely undemocratic. The UNGA consists of 193 countries representing over eight billion people, each country having a single vote, no matter the size of its population. For example, Tuvalu (population 11,792), Iceland (pop. 341,243), India (pop. 1,380,004,385) and China (pop. 1,439,323,776) each have a one vote. So voting in the UNGA is wildly disproportionate to population.

We can correct this disproportion by ignoring the country-by-country tally and treating the result as if it were a popular referendum. Here is the tally of percentages of world population represented in the vote:

By this measure, only 27% of the world’s population supported the resolution; 73% did not. This is a resounding defeat for US/NATO “soft power.” It can only be explained by global antipathy toward the US/NATO side in this war and sympathy for Russia.

Consider that the US has long used bribes and threats to engineer UNGA votes; it controls the International Monetary Fund and the World Bank; it imposes illegal unilateral coercive measures (“sanctions”) on a quarter of the world’s population; it is prolific and virtually alone in its constant coups and destabilization campaigns against uncooperative governments around the world. So it is not surprising that the US has mustered as many votes as it has for this and previous Ukraine/Russia resolutions. What is surprising is that it could not get more.

To Western eyes, red with Ukraine War fever and alleged Russian atrocities, these results may surprise, but they shouldn’t. For one thing, the Western narrative about the war itself, atrocity allegations against Russia, the history of the conflict since the 2014 Maidan coup (or “revolution” in Western eyes), are not necessarily believed by the rest of the world. [3] After all, Western media sources recounting Russian atrocities also report with straight faces accusations that Russia blew up the Nordstream pipelines, and that it repeatedly shelled the Zaporozhye nuclear power plant while simultaneously occupying it.

More important, to many non-West European countries, this war is not seen in isolation from the history of North American and Western European aggression, exploitation, plunder and genocide, as shown by these quotes from opponents of the resolution speaking in the General Assembly: [4]

Cuba: Will Cuba be compensated for the damage accumulated over six decades of an economic, commercial and financial blockade; the lives lost; and the illegal occupation of its national territory? What about Mexico, Viet Nam, the Pacific Islands, Iraq, Libya, Afghanistan, Syria and the State of Palestine?

Eritrea: States suffering from foreign interference, colonialism, slavery, oppression, unilateral coercive measures, illegal blockades and other internationally wrongful acts also deserve the right for remedy, reparation and justice. As national positions must be respected, the Assembly must play a positive role in ensuring the conflict in Ukraine is resolved through diplomatic efforts and means while avoiding any initiative that might further aggravate the situation on the ground and escalate tensions.

Syria: [The draft resolution is part of a series of] unbalanced, biased and provocative resolutions pushed by the United States and its Western partners. [I]ts real objective is to pay for the increasing purchases of weapons by Ukraine. … Who will compensate my country for the destruction of the Syrian infrastructure by the so‐called international coalition?

Nicaragua: The resolution is an example of the hypocrisy and double standards of certain countries. …. [It] ignores the painful history that imperialist countries have left behind. It does not recognize the genocide against the original peoples of countries. [Nicaragua supports its] brethren in the Caribbean and Africa that are seeking reparations for these losses…

Rich vs. Poor/US vs. the World

Beyond these denunciations, global rejection of the UNGA resolution has deeper implications. This war is a battle in a far older, longer war of Western European aggression against the poorer nations of the world, the vast majority of humanity. Since World War II, this global war has been largely directed by a single hegemon, the United States. Europe is only one battlefront in this larger war.

This vote falls (although imperfectly) along the global divide of “core” nations vs. nations of the “periphery” and “semi-periphery.”

According to world-systems analysis, “core” countries are those that draw a disproportionate amount of the world’s labor surplus value through possession of monopolized and semi-monopolized high-value production processes. This production is girded by patents, copyrights, and various advantageous economic, military and political arrangements. [6]“Peripheral” and “semi-peripheral” countries, on the other hand, have many fewer of these high-value production processes and rely on the production of commodities and more generic manufactured goods. [7] Samir Amin calls this absorption of the surplus value by core countries “imperialist rent,” which sums it up nicely.

And by the way, Western media often give the misleading impression that China and Russia have economies comparable to the rich countries of the imperial core nations. Not so. China and Russia are peripheral or semi-peripheral countries. While the poverty of the Global South is well known, less well known is the relative poverty of both Russia and China. Nominal GDPs per capita (in US dollars) of the two countries are just fractions of that of the US: US ($69,287.5), Russia($12,172.8), China ($12,556.3). Thus the China-Russia alliance, and their alliance with the Global South generally, is an alliance of commonality.

The global divide is also racial, since countries of the imperial core are nearly all dominated by whites while the rest are populated largely by people of color. [9] This racial imbalance results from the construction of the global system over half a millennium of European colonialism, neocolonialism and imperialism, accompanied by ideologies of white ethnic, nationalist, cultural and racial supremacy.

US vs. The World: A Global Military Occupation

The geography of the war is not confined to Ukraine. The US asserted that it is waging a war against Russia through Ukraine. Beyond this, the collective West, led entirely by the US, is on one side of the war, and large parts of the East and Global South are on the other, as shown by this UNGA vote plus the overwhelming lack of global support for the sanctions on Russia.

If from a bird’s eye view we could see the surface of the whole world at once, this war and the global divisions it exposes would be obvious. The US would appear as the primary belligerent since its occupation forces cover the world.

And the US is quite forthright about its military occupation of the globe. It officially maps the occupation into six zones of US military “command”: Northern (North America); Southern (South America); European; Central (West Asia, aka “Middle East”); Africa; U.S. Indo-Pacific (Asia, Australia and the Pacific). [10] Within each zone US military bases enforce this occupation against friend, vassal, and potential foe alike. 800 to 1,000 of these overseas military bases and installations dot the globe. [11] Almost half of these bases are arrayed like a necklace, or garrote, around Russia and China. [12] 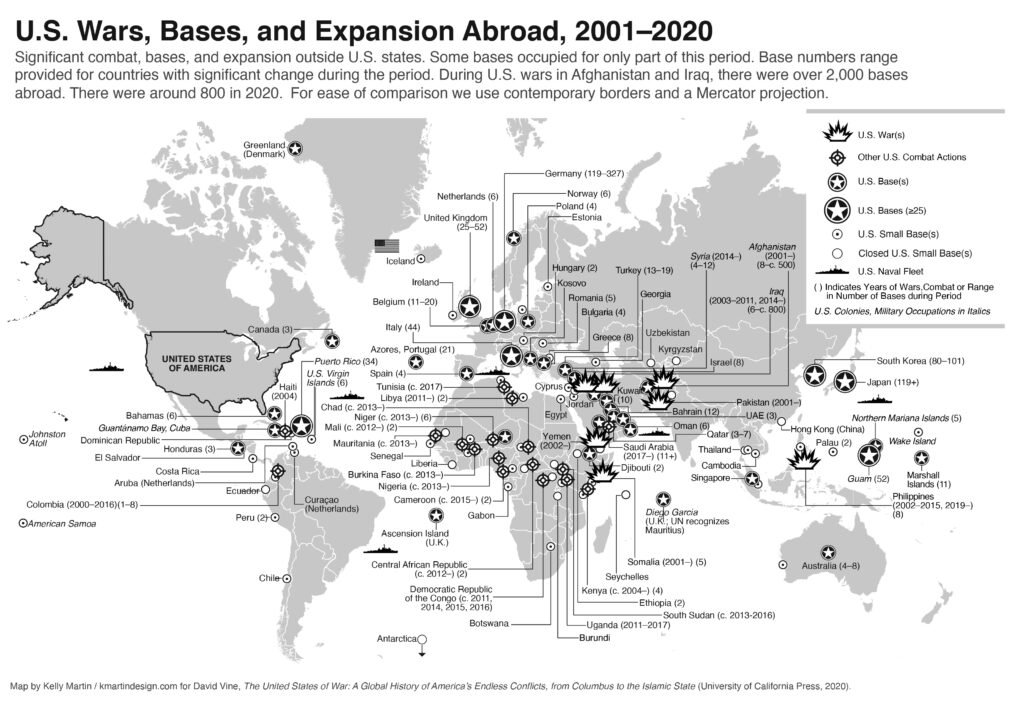 Ukraine has long been a battlefront in this global occupation. Ukraine’s military integration into NATO began years before the Russian intervention of February 24, 2022. Indeed, Ukraine’s fusion with NATO has been part of the 14-nation, three-decade eastward march of US/NATO toward Russia ever since the dissolution of the Soviet Union.

The war in Ukraine is a world war, dividing the world’s nations by wealth, core/periphery status, and race, as revealed in the vote on the November 12th reparations resolution. To prosecute the war the West sends troops, weapons, and money to Ukraine, and sanctions Russia. Gas pipelines far from the battlefield are blown up to keep Europe under the sanctions regime. [13] And the war and sanctions affect the Global South as well as the Global North. [14]

The world’s historic failure to contain US aggression has produced the dead, wounded, displaced, and grief-stricken of Ukraine and Russia, and condemned hundreds of millions in the Global South to destitution and hunger. Little wonder that so many around the world see as a tragic necessity Russia’s determined resistance to the US eastward push in Europe.

3. See these links on the historical background of the war, the killings in Bucha, reports of rapes and viagra, Bucha and Mariupol. On international support for Russia, even Western-aligned sources not sympathetic to Russia have reported some African support for Russia: “Why are people in West Africa waving Russian flags?”; “Why Are Protestors In Ethiopia And Mali Waving Russian Flags?”.

4. The quotes are as reported by the United Nations.

5. “The countries of the world can be divided into two major world regions: the ‘core’ and the ‘periphery.’ The core includes major world powers and the countries that contain much of the wealth of the planet. The periphery has those countries that are not reaping the benefits of global wealth and globalization.” (Colin Stief, ThoughtCo.com, 1/21/20).

8. Every core country (see fn. 6) except Israel voted IN FAVOR of the November 14th resolution.

10. The World With Commanders’ Areas of Responsibility, Library of Congress.    (See attached map of the commands.)

12. Compare, Russia has twenty-five foreign bases and China has one.