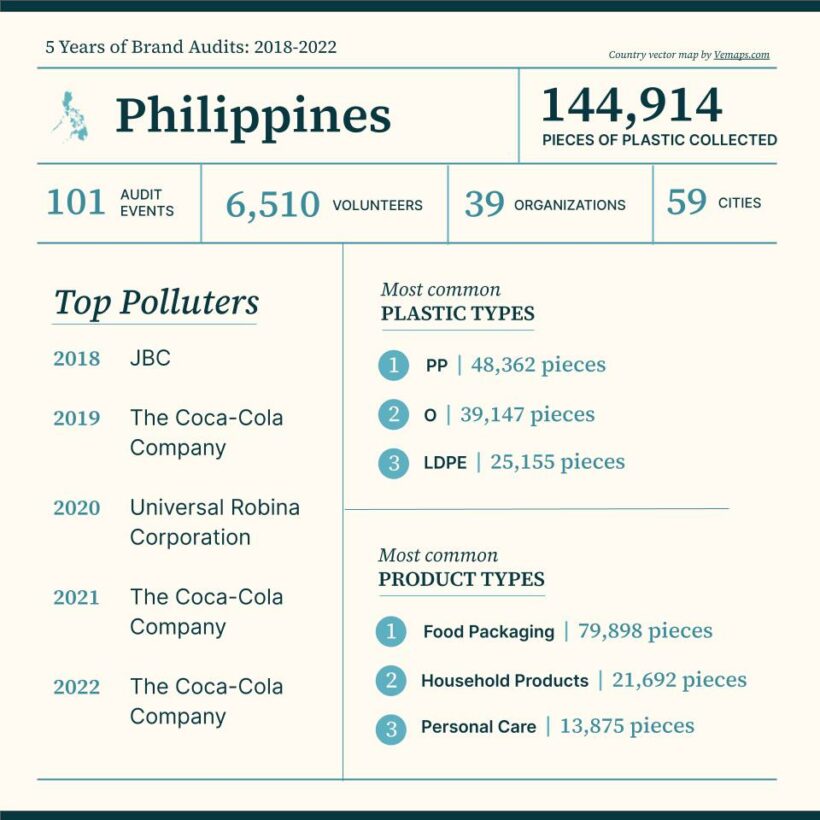 15 Nov 2022 – The Coca-Cola Company, PepsiCo, and Nestlé come in as the world’s top plastic polluters for five years running, according to Break Free From Plastic’s latest global brand audit report.[1] The 2022 Brand Audit analyzes five years’ worth of citizen science trash-collection data, exposing how corporate voluntary commitments are not effectively reducing these companies’ devastating environmental impacts. In response, activists around the world are calling for a Global Plastics Treaty [2] that can provide legally-binding mechanisms and enforcement policies to effectively reduce the amount of plastic both produced and used by corporations.

Since 2018, global cleanups have been carried out by more than 200,000 volunteers in 87 countries and territories to identify the companies polluting the places with the most plastic waste. Over the five years, more Coca-Cola Company branded items were collected than the next two top polluters combined. [3] This year’s brand audits found more than 31,000 Coca-Cola branded products, doubling the proportion of Coca-Cola products found in 2018. [4] These findings revealed that the top polluter is serving as a sponsor of the UN climate change conference COP27 in Egypt. Given that 99% of plastic is made from fossil fuels, Coca-Cola’s role in COP27 baffles environmental activists.

Today, in response to corporate inaction, activists worldwide are commemorating a 5-year “Trashiversary” for these companies by mailing or delivering their own waste to them to demand urgent action. The actions are taking place today, targeting Coca-Cola in Argentina, Bangladesh, Brazil, the Democratic Republic of the Congo, Kenya, Nigeria, South Africa, Tanzania, Togo, Uganda, the US, and Zambia; Unilever in Indonesia, the United Kingdom, and South Africa; and PepsiCo in India and Tanzania.

In 2018, the same year that Brand Audits efforts started, the Ellen MacArthur Foundation and the United Nations Environment Programme together launched the New Plastics Economy Global Commitment. This program centered on a set of voluntary commitments to address plastic pollution made by major fast-moving consumer goods companies, including most of the top plastic polluters. However, the Global Commitment 2022 Progress Report revealed that their 2025 targets will “almost certainly” not be met. For many of these companies [5], the use of plastic packaging has actually increased since joining the Global Commitment, exposing how voluntary actions are not leading to any kind of significant impact on plastic reduction.

Considering the failing voluntary commitments of many of the major plastic polluting companies, the Break Free From Plastic movement is calling for an ambitious, legally-binding Global Plastics Treaty. The first treaty negotiation meeting will be held in Punta Del Este, Uruguay, at the end of the month.

“Instead of allowing companies like Coke to greenwash their image, governments need to compel polluters to invest in reuse and alternative product delivery systems that avoid the problem in the first place. This is one of the key systemic changes required for the world to avert the full consequences of climate change and plastic pollution. Governments worldwide now have the justification and opportunity to effectively address and reverse the plastic pollution crisis by coming up with a global plastics treaty that cuts plastic production, makes corporations accountable for the pollution they are causing and mainstreams reuse-based alternatives.”

“In countries such as Mexico, Coca-Cola is fighting efforts to tackle plastic pollution such as local single-use plastics bans. Our communities suffer while big plastic polluters, in league with Big Oil, massively expand fossil fuel-based plastic production to make a profit. Big brands like Coca-Cola, PepsiCo, Nestlé and Unilever helped create this crisis: they must phase out throwaway plastic, ensure at least half of their packaging is reusable by 2030, advocate for an ambitious global plastics treaty that limits plastic production and use, and accelerate a just transition to the reuse economy.”

“To take effective action to eliminate plastic pollution it is necessary to understand it first. Performing waste and brand audits for five years in a row allowed us to have comparative data showing the sources of pollution and the positive impact of restrictive plastic policy in addressing the plastic crisis. The brand audit data has been used by various stakeholders for data-driven decision-making and has become an essential pillar of plastic advocacy in Tanzania and East Africa.”

“The recent brand audit is once again showing who the real polluters are. These companies are falling short of their promises, but we are not reducing our commitment to advocate for Zero Waste. At GAIA, we continue to work with organizations and communities with real lived experiences highlighting global south’s leadership in Zero Waste, and we will continue to include brand audits to keep top polluters accountable.”

“The world’s top plastic polluters have littered the planet with plastic waste – and marked it clearly with their name. Instead of truly deplastifying by eliminating single-use packaging and shifting to reuse and refill, they’re fixated on recycling – a completely inadequate response to the quantities of plastic these companies place on the market every single year. Consumers, shareholders, and NGOs are turning to litigation to jolt these companies out of their stupor on plastics, and legal cases have now been launched against companies across the plastics value chain. For these companies, the risk of litigation looms especially large: we know they are driving the plastics problem. We know the harms caused by plastic pollution and the plastics lifecycle. Lawsuits holding them accountable are just a matter of time.”

“Coca-Cola and PepsiCo – the brands at the top of the list of the world’s worst polluters for five years in a row – are the same companies that colleges and universities welcome for exclusive multi-million dollar contracts to be the sole drink provider on their campuses. For years, these companies have tried to convince us that waste is an individual problem, but we know that this is not true. Students often find barriers to shifting their campuses to reuse in the form of lengthy legal contracts that rarely include any language on sustainability. Students and young people, using Brand Audit data, are leading a movement for more transparency, corporate responsibility, and climate accountability as we move towards waste elimination and true reuse systems.”

About the Global Plastics Treaty:

The mandate, titled “End plastic pollution: Towards an international legally binding instrument,” sets the stage for governments to negotiate a comprehensive and legally binding treaty that will cover measures along the entire life cycle of plastic. In addition, the mandate will serve to guide the development of the treaty itself, which an International Negotiating Committee (INC) will be tasked with drafting by the end of 2024.

The first Intergovernmental Negotiation Committee meeting will take place in Punta del Este, Uruguay, from November 28th to December 2nd. Dozens of BFFP members are expected to attend the meeting.

About BFFP — #BreakFreeFromPlastic is a global movement envisioning a future free from plastic pollution. Since its launch in 2016, more than 2,700 organizations and 11,000 individual supporters from across the world have joined the movement to demand massive reductions in single-use plastics and push for lasting solutions to the plastic pollution crisis. BFFP member organizations and individuals share the values of environmental protection and social justice and work together through a holistic approach to bring about systemic change. This means tackling plastic pollution across the whole plastics value chain – from extraction to disposal – focusing on prevention rather than cure and providing effective solutions. www.breakfreefromplastic.org.