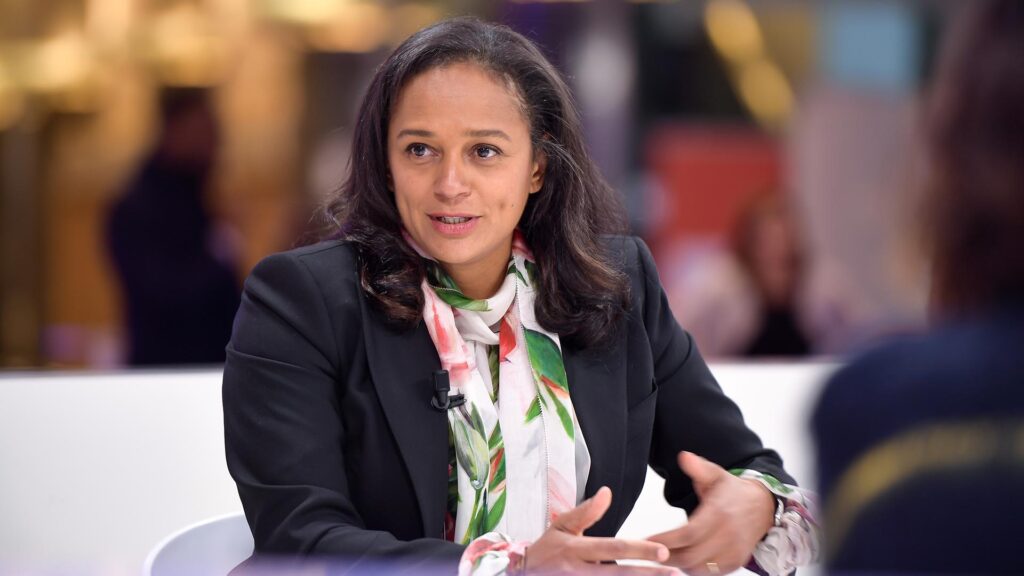 19 Nov 2022 – The international police organization Interpol has issued a warrant for the arrest of Angolan billionaire Isabel dos Santos, according to sources.

The exposé revealed how the billionaire and her allies benefited from lucrative deals in oil, diamonds, telecommunications, banking and real estate.

The mechanisms, it alleges, were created “with the intention of obtaining illicit financial gains and whitewashing suspicious criminal operations.”

The sources said the warrant further alleges that dos Santos acted upon information she had obtained as then-head of Angola’s state oil company, Sonangol.

Interpol declined to comment when asked to confirm that it had made an international request for dos Santos’s arrest on receipt of a “Red Notice” from Angola, saying it did not comment on specific cases except in special circumstances.

Dos Santos has previously denied benefiting unfairly from her father’s position as Angolan president or any other wrongdoing.

The Luanda Leaks investigation, which had a profound impact on Africa’s then richest woman and her family, uncovered dos Santos’ dealings in a network of companies, including Sonangol.

Dos Santos has homes in Dubai and London and is believed to visit Portugal often.

Her father, José Eduardo dos Santos, an autocrat who ruled over Angola for decades, died in Barcelona last year following a long illness.

Her husband, Sindika Dokolo, died the previous year in a free diving accident off an island near Dubai.

An international tribunal in the Netherlands ruled after his death that he and his wife had obtained a stake in the Portuguese oil company Galp in a way that was “tainted by illegality.”

The tribunal ordered dos Santos to return the $500 million stake which was secured in a controversial deal through Sonangol when her father was still president.

ICIJ revealed  that dos Santos and Dokolo had obtained the Galp stake for just a $15 million initial deposit, in the deal overseen at the time by dos Santos’ father.

The Luanda Leaks investigation was based on a trove of 715,000 documents including emails, charts, contracts, audits, and accounts that help explain how dos Santos built a business empire worth an estimated $2 billion.

The Platform to Protect Whistleblowers in Africa, an organization based in Paris, France, obtained the files and shared them with ICIJ.

In a statement sent to Reuters today, dos Santos’ representatives said she had not been made aware of the arrest warrant.

This story has been updated since original publication with comment from Interpol.

The International Consortium of Investigative Journalists is a global network of more than 190 investigative journalists in more than 65 countries who collaborate on in-depth investigative stories. Founded in 1997 by the respected American journalist Chuck Lewis, ICIJ was launched as a project of the Center for Public Integrity to extend the Center’s style of watchdog journalism, focusing on issues that do not stop at national frontiers: cross-border crime, corruption, and the accountability of power. Backed by the Center and its computer-assisted reporting specialists, public records experts, fact-checkers and lawyers, ICIJ reporters and editors provide real-time resources and state-of-the-art tools and techniques to journalists around the world.  More…