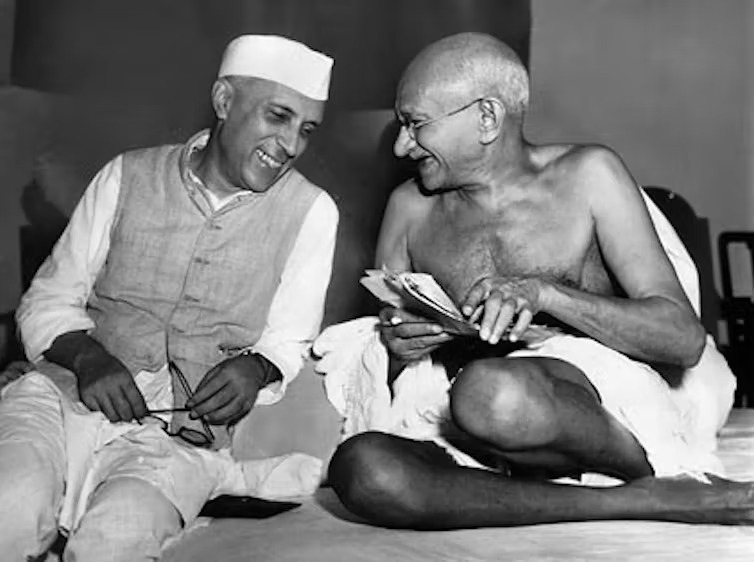 Jawaharlal Nehru with Gandhi – The Conversation

Nehru was a man who struggled for India’s independence for several years along with Mahatma Gandhi and several other political stalwarts. He was born in a rich family and studied in England for several years, but he was put  in several  prisons till India became independent on 15 August 1947. This was done so that he could be near his wife Kamla who was seriously ill and was moved from hospital to hospital.

His first words to his countrymen called Tryst with Destiny when India became free were:

“Long years ago, we made a tryst with destiny; and now the time has come when we shall redeem our pledge, not wholly or in full measure, but very substantially. At the stroke of the midnight hour, when the world sleeps, India will awake to life and freedom.”

He was elected the first Prime Minister of independent India and occupied the prestigious position for seventeen years. His only daughter Indira was always beside him in his struggle for freedom from the British. She also became a powerful PM afterwards.

As a Prime Minister, Nehru laid a lot of emphasis on development, industry, science and technology for the betterment of the country.

However, he also loved to play with children especially on his anniversary, 14 November. The children also cared for  him and lovingly called him  Chacha Nehru —- Uncle Nehru.  His anniversary was also called Bal Divas — Childen’s Day.

But towards 1960 – 62, his health deteriorated. Towards the end of this period he became ill and people used to wonder —After Nehru what?

His dead body was displayed outside his grand official home for people to pay respects after which his body was cremated as per custom in a place near Rajghat the samadhi of Mahatma Gandhi. Even I, as a young admirer of Nehru, went to have a last glimpse of the great man.

Nehru was not only a great politician; he was an excellent writer in English. He wrote: The Discovery of India, Glimpses of World History, An Autobiography.

Many people like myself who saw him in action, remember his strength, ideas and truthfulness.

Anticopyright: Editorials and articles originated on TMS may be freely reprinted, disseminated, translated and used as background material, provided an acknowledgement and link to the source, TMS: Jawaharlal Nehru (14 Nov 1889 – 27 May 1964), is included. Thank you.