US Nuclear Forces Chief: ‘The Big One Is Coming’

The head of US Strategic Command called the war in Ukraine a ‘warmup’ for what is to come. 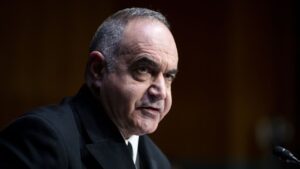 6 Nov 2022 – The commander that oversees US nuclear forces delivered an ominous warning at a naval conference last week by calling the war in Ukraine a “warmup” for the “big one” that is to come.

“This Ukraine crisis that we’re in right now, this is just the warmup,” said Navy Adm. Charles Richard, the commander of US Strategic command. “The big one is coming. And it isn’t going to be very long before we’re going to get tested in ways that we haven’t been tested [in] a long time.”

Richard’s warning came after the US released its new Nuclear Posture Review (NPR), which reaffirms that the US doctrine allows for the first use of nuclear weapons. The review says that the purpose of the US nuclear arsenal is to “deter strategic attacks, assure allies and partners, and achieve US objectives if deterrence fails.”

The NPR says the US “would only consider the use of nuclear weapons in extreme circumstances to defend the vital interests of the United States or its Allies or partners.”

The Nuclear Posture Review calls for the modernization of the nuclear triad, which could cost up to $1.5 trillion, and keeping tensions high with Russia and China helps justify the massive price tag. Richard said last week that the US needs to put more resources into competing with China’s military.

Congress is looking to spend big on arming Taiwan, with a plan to give the island $10 billion in military aid included in the Senate’s version of the 2023 National Defense Authorization Act. While done in the name of deterrence, China’s actions and rhetoric make it clear that more US support for Taiwan will make war in the region more likely.

Dave DeCamp is the news editor of antiwar.com.