Venezuela: Guaidó Is Gone, but Media Dishonesty Is Here to Stay

11 Jan 2023 – The latest iteration of Washington’s regime-change efforts against the democratically elected Venezuelan government came to an end. On December 30, an opposition-controlled parliament whose term ran out two years ago voted to end the US-backed “interim government” headed by Juan Guaidó.

A few outlets recognized that the latest developments represented “a blow” (New York Times, 12/30/22) or “a failure” (Financial Times, 1/8/23) for the United States, but for the most part the media’s goal seemed to be to solidify the biased premises underlying the regime-change operation. Corporate media remain as unwilling as ever to question US foreign policy, regardless of its deadly consequences. 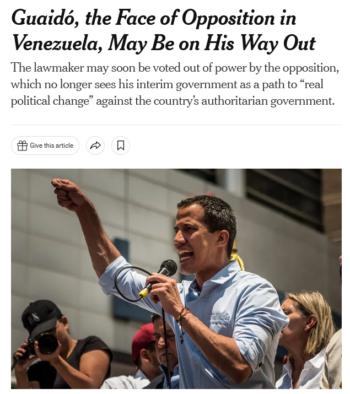 The coverage of Guaidó’s demise saw media pundits dust off some of their Venezuela bias greatest hits. The New York Times (12/22/22) used the “authoritarian” label in reference to Venezuelan President Nicolás Maduro three times in the teaser and the opening two paragraphs of an article. Other favorites like “strongman” (Wall Street Journal, 1/5/23) and “autocratic” (LA Times, 1/5/23) were not far behind.

Likewise frequent were gushing tributes to the “hope” that Guaidó signified (AP, 1/5/23; New York Times, 12/30/22), as if the unelected US-backed pretender naturally represented the aspirations of the Venezuelan people. Some sources made the even bolder claim that “the failure to drive out Maduro frustrated Venezuelans” (AP, 12/30/22; Al Jazeera, 12/31/22). This is the common maneuver of presuming that all Venezuelans support the opposition, while also ignoring the overwhelming popular rejection of foreign meddling.

The opening act of any Guaidó story is always the Goebbelsian claim that Maduro’s 2018 electoral win was illegitimate (FAIR.org, 5/23/18), despite the lack of evidence of irregularities and the presence of international observation missions who vouched for the vote’s integrity (Venezuelanalysis, 5/31/18).

Once this false premise was established, another one followed: the alleged “constitutional” grounds behind the self-proclaimed “interim government.” Whether by allowing Guaidó and acolytes to repeat the claim (Wall Street Journal, 12/30/22; Washington Post, 12/30/22), or by casually stating it (AP, 1/9/23, 1/9/23; Reuters, 12/29/22; New York Times, 12/22/22), Western outlets were eager to paint the US-backed presumption with a varnish of legitimacy.

Nowhere to be found was the text or a link to the invoked constitutional article. Because anyone who read Article 233 of the Venezuelan constitution would immediately realize that: a) none of the conditions to declare the presidency “vacant” were met, as Maduro had not died, resigned, been removed by the Supreme Tribunal of Justice, become permanently physically or mentally disabled, abandoned his position or been removed by a popular vote; and b) even if one were, it would lead to nothing remotely resembling this parallel government that lasted nearly four years. (Instead, the constitution calls for new direct elections to be held within 30 days.)

Having taken their gaze off of Venezuela as regime-change efforts faltered, corporate journalists needed some dishonest gymnastics to report Guaidó’s demise. In particular, they had to explain why a National Assembly whose term expired two years ago was still around. Their experience in discarding elections boycotted by the opposition and won by Chavismo came in handy (FAIR.org, 12/3/21, 1/27/21, 5/23/18).

For example, AFP said the former parliament “was replaced by a legislature loyal to Maduro” (12/31/22), ignoring the fact that it was “replaced” through the regularly scheduled elections. But the Associated Press (12/22/22, 1/9/23, 1/9/23) went a step further by calling the newly elected parliament “Maduro’s rubber-stamping legislature/National Assembly,” as if there is something sinister about a party with a legislative majority supporting a president from the same party. It is not the government’s fault that the opposition, with US encouragement, decided to boycott elections and pin its hopes on an outright coup. 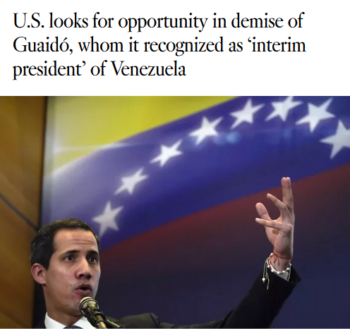 The LA Times (1/5/23) described the US recognizing a lawmaker with no constitutional claim to power as the actual government of Venezuela as an “audacious gamble.”

With all the effort to double down on well-crafted narratives, it was hard to expect any contrition from Western media that cheerfully endorsed Guaidó’s baseless claims to power. Instead, his failure was attributed to Maduro, currently serving his second constitutional six-year term, having a “grip on power” (Wall Street Journal, 1/5/23) that was “maintained” (Reuters, 1/4/23), “tightened” (AFP, 12/30/22) or “proven durable” (Washington Post, 12/30/22).

The opposition frontman’s most serious initiative to overthrow Maduro was a military putsch on April 19, 2019. Yet only a few outlets explicitly mentioned this episode (Wall Street Journal, 12/30/22; New York Times, 12/30/22). Most included only vague references to a failure “to win over” (AP, 12/30/22) or “recruit” (Bloomberg, 12/30/22) the military. The Associated Press (1/5/23) went so far as to falsely describe the Venezuelan armed forces as the country’s “traditional arbiter of political disputes.” It seems that the preferred means to “restore democracy” in the South American nation was a good old-fashioned military coup.

Not mentioned at all by the establishment outlets was the hardline opposition’s calls for a foreign invasion (Venezuelanalysis, 5/13/19) and, more damningly, Guaidó actually hiring a mercenary company to topple Maduro and put himself in power (Venezuelanalysis, 5/17/20). The best hope was always that US economic sanctions would generate enough suffering to force the government out.

While the “interim government” made no inroads to take power, it was handed control of a number of foreign-held assets worth billions by Washington and allies, among them US-based refiner Citgo.

Corporate outlets reported that these assets need to be “protect[ed]” (AP, 12/30/22) or “shield[ed]” (AP, 1/9/23) from creditors, and that the opposition’s control might be jeopardized by Guaidó’s ouster. Spain’s El País (12/30/22) baselessly claimed these resources would be “embezzled” by the Maduro government.

Out of sight is the string of corruption allegations pertaining to opposition (mis)management of foreign assets (Venezuelanalysis, 10/14/21), which came from the anti-government camp itself. The most publicized case was Colombia-based agrochemical producer Monómeros. Humberto Calderón Bertí, who served as opposition “ambassador” in Colombia, accused the different factions of treating the company like a “piñata.”

Likewise unmentioned is a series of actions by Guaidó’s camp that have endangered Citgo, from not showing up in court to striking under-the-table deals with creditors to suspicions of conflicts of interest (Venezuelanalysis, 9/25/21, 10/4/21, 10/23/21).

‘Regardless of what form’ 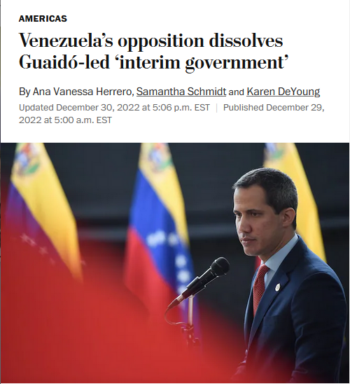 The Washington Post (12/30/22) writes about “the opposition-controlled National Assembly” as if there haven’t been legislative elections in Venezuela since 2015.

The heightened regime-change attempts by Washington in recent years were cheered at every step by the Western media establishment. By falsely trumpeting Guaidó’s credentials and whitewashing his anti-democratic actions, corporate journalists were free to endorse any and all efforts to place him in power, especially deadly economic sanctions.

Washington imposed, among many other measures, heavy sanctions on the oil sector of a country that depended on oil sales for over 90% of its export revenue. And the resulting widespread suffering is somehow an unforeseen consequence for the Times! Moreover, not only are the unilateral measures a form of collective punishment against civilians, they actually preceded Guaidó.

Other media only brought up sanctions to echo US officials saying they can be used “to pressure Caracas” (Wall Street Journal, 1/5/23), since the US “hold[s] all the cards” (Washington Post, 12/30/22). State Department spokesperson Ned Price was quoted as saying sanctions will “remain in place,” and could even be expanded should the Venezuelan opposition say so (AFP, 1/4/23).

As usual, the New York Times (12/22/22, 12/30/22) outdid all others in covering for US economic blackmail. The Biden administration recently released around $3 billion in frozen Venezuelan funds, to be used in social programs via UN agencies, after the Venezuelan government restarted talks with the hardline opposition. The Times (12/22/22) outrageously described it as Maduro “agree[ing] to” allow these funds to be used for aid. Caracas has repeatedly demanded that its assets be released, and even suggested this kind of arrangement. During the pandemic, the government asked that the frozen gold in the UK be sold to buy food and medicine through the UN. The Venezuelan opposition and its foreign backers refused.

The latest coverage was just another demonstration that Western media will unflinchingly back Washington’s Venezuela policies no matter what. Even when anonymous officials callously say that the US will continue to recognize the opposition’s “interim government,” “regardless of what form it takes” (AFP, 12/31/22; Al Jazeera, 12/31/22; Washington Post, 12/30/22), loyal stenographers will not hesitate in presenting it as democracy promotion.

It is worth recapping: The media establishment followed Washington’s lead in declaring the 2018 elections fraudulent with no evidence, echoing Guaidó’s “constitutional” claim, backing all sorts of coup attempts, as well as supporting and whitewashing murderous sanctions and the theft of Venezuelan assets. The US’s surrogates can come up with whatever scheme they can think of, and the imperial regime-change arsenal is at their service. And that includes media coverage as dishonest as necessary.

The corporate media pretend to defend the truth and hold those in power accountable. Their claim is just as legitimate as Guaidó’s self-proclaimed “interim presidency.”

Ricardo Vaz is a political analyst and editor at Venezuelanalysis.