Articles by Craig A. James 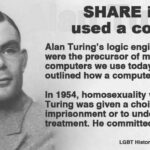 Alan Turing was the inventor of the modern digital computer, laying down the mathematical foundation for all computer science. In World War II, his genius at breaking Nazi secret codes saved the world from Nazi domination– not figuratively, but in actuality. But in 1954 homosexuality was illegal in England; Turing was given a choice between imprisonment and chemical castration. He committed suicide. If Turing hadn’t been homosexual, his name might be a household word like Einstein, Newton and Galileo.