Alan Turing: Gay Man Who Saved the World yet Died in Disgrace 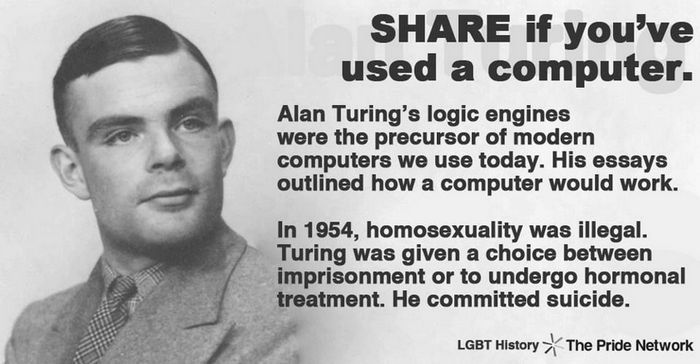 What do you do to a homosexual mathematician whose code-breaking genius saved the world during World War II? Not figuratively, but actually saved the world from Nazi domination? You put him on trial, of course! You convict him of gross indecency. You force him to choose prison or chemical castration. You strip him of all dignity and hound him until in shame and despair he swallows a cyanide pill and dies.

The story of Alan Turing is one of the most disgraceful episodes of modern civilization. A man who should have been a hero of the free world and idolized next to Einstein and Newton in the history books was instead hounded to death because of religion-inspired homophobia.

In World War II, Alan Turing’s genius at breaking Nazi secret codes was so successful that the Allies could have sunk almost every single U-boat and convoy that left Germany. Turing’s work was so good it was like cheating at cards: if you win every hand, the other players will quickly figure out that the game is rigged. The Allies had to employ all sorts of tricks to hide their success; if you want a fascinating account, I highly recommend Neal Stephenson’s semi-fictional Cryptonomicon, the story of the rise of modern cryptography.

Alan Turing literally saved the world from Nazi domination. Without his work, WWII would have ended very differently. The Nazi regime might have remained undefeated, still in control of Northern Europe and western Asia. The Japanese might have retained control of East Asia. Our world maps would look vastly different today. And even if we’d won the war, without Turing’s work it’s likely that millions more soldiers and civilians would have died in the fight.

And Turing’s work didn’t end with cryptography. Today he’s best known as the inventor of the modern digital computer, the one who laid down the mathematical foundation for all computer science. His name is even enshrined in two of the most important computer-science concepts, the Turing machine and the Turing test.

If Alan Turing hadn’t been homosexual, his name might be a household word like Einstein, Newton and Galileo. What home doesn’t have a computer? If you count the laptops, cell phones, digital TVs, iPods, digital cameras and microwave ovens in your home, I’ll bet you own more than a dozen computing devices. Every one of them works on the principles laid down by Alan Turing during WWII when he was trying to develop a computing machine to break the enemy’s codes even faster.

Turing’s fall from grace came at the hands of the religious commi-bashing right, the British equivalent of America’s McCarthyism. In 1952 a gay lover helped an accomplice rob Turing’s house. During the police investigation, it came out that Turing was a homosexual. He was arrested and convicted of gross indecency, and given a choice of prison or chemical castration. Turing choose castration.

On June 7, 1954, at just forty two years of age, Alan Mathison Turing killed himself by swallowing cyanide. One of the greatest minds in the history of humankind was lost forever, and one of the greatest heroes of World War II died in shame and disgrace.

But the real shame is on the rest of us, not Alan Turing. In spite of his sexual orientation and consequent hardships he must have experienced, he remained a true patriot and mathematician. He put his mind to work to save the very society that persecuted him. It is possible that he changed history and saved more lives than any other single person in the twentieth century.

Thousands of people have come together to demand justice for Alan Turing and recognition of the appalling way he was treated. While Turing was dealt with under the law of the time and we can’t put the clock back, his treatment was of course utterly unfair and I am pleased to have the chance to say how deeply sorry I and we all are for what happened to him … So on behalf of the British government, and all those who live freely thanks to Alan’s work I am very proud to say: we’re sorry, you deserved so much better.

It is stories like Turing’s that keep me writing. It’s easy to have a live-and-let-live attitude toward the immoral “morality” of the Bible. It sounds nice to advocate tolerance and respect. But Alan Turing is dead, and the Bible is where it all started.

Reprinted with permission from the author.

Craig A. James is a writer, computer scientist, evolutionist, and movie producer. He lives in Southern California.