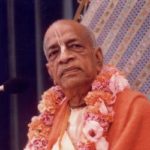 Srila Prabhupada was an Indian spiritual teacher who founded the International Society for Krishna Consciousness (ISKCON). He is among the most prominent Vedic scholars, translators, and teachers of the modern era. Credited with translating and commenting on over 80 volumes of the Vedas, including the Bhagavad Gita and Srimad-Bhagavatam, he is regarded as the world’s most prominent contemporary authority on bhakti-yoga.

Abhay Charanaravinda Bhaktivedanta Swami Prabhupada was a Gaudiya Vaishnavism spiritual teacher (guru) and the founder preceptor (acharya) of the International Society for Krishna Consciousness (ISKCON), commonly known as the “Hare Krishna Movement”. In February 2014, ISKCON’s news agency reported to have reached a milestone of distributing over half a billion books authored by Prabhupada, since 1965. He has been described as a charismatic leader, in the sense used by sociologist Max Weber, as he was successful in acquiring followers in the Americas, Europe, Asia, Africa, India and elsewhere.