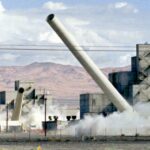 • Hanford Nuclear Reservation is the most polluted area in the United States. Buried beneath the complex is 56 million gallons of radioactive waste that need to be dealt with.
• The reservation produced the plutonium for Fat Man, the atomic bomb that was dropped on Nagasaki in Japan, as well as for the United States’ atomic weapon stockpile during the Cold War. {Read on…}