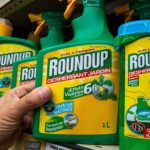 21 Feb 2020 – It seems forever that we’ve been trying to get Monsanto’s Roundup weedkiller off the market, and out of our food. It’s a battle that’s had more than its share of highs and lows. Where are we today? Fighting a new company—Bayer now owns Monsanto.

Jane Goodall: How Can We Believe It Is a Good Idea to Grow Our Food with Poisons?
Katherine Paul | EcoWatch – TRANSCEND Media Service, 3 Apr 2017

9 Mar 2017 – Two new reports published in recent weeks add to the already large and convincing body of evidence, accumulated over more than half a century, that agricultural pesticides and other toxic chemicals are poisoning us. Both reports issue scathing indictments of U.S. and global regulatory systems that collude with chemical companies to hide the truth from the public, while they fill their coffers with ill-gotten profits.

As new studies surface it’s become increasingly clear that among credible physicians and scientists the consensus is that we’d better wake up to the risks and threats posed by a reckless technology that has been allowed to dominate our food and farming systems.

“It is ironic to think that man might determine his own future by something so seemingly trivial as the choice of an insect spray.” – Rachel Carson, Silent Spring

It was laughable when Coca-Cola launched a campaign to fight obesity. And even more laughable when the king of soda’s anti-obesity campaign shifted all the blame for those extra pounds to lack of exercise and chairs (yes, chairs). But now, the company that donated $1.7 million to defeat last year’s GMO labeling initiative in California has gone from laughable to dangerous.

“A Culture that views pigs as inanimate piles of protoplasmic structure to be manipulated however cleverly the human mind can conceive will view its citizens the same way – and other cultures.” We associate food with at most, pleasure, at the very least, survival. It’s not too different for animals.