What to Celebrate in Rwanda’s Genocide Anniversary

Editorial Board – The Christian Science Monitor

April 3, 2014 – The 20th anniversary of the Rwanda genocide should focus as much on how the African nation worked toward reconciliation through forgiveness as on the mass slaughter itself. 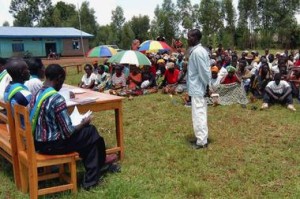 A Rwandan genocide suspect stands trial before a community court, also known as a gacaca, in Zivu in 2005. AP Photo

This month, Rwanda marks the 20th anniversary of an event that its name is most associated with – the 1994 mass slaughter of the Tutsi minority and many in the majority Hutu. Over 100 days starting April 7, more than 800,000 people were killed, many by neighbors incited to ethnic hatred by a political elite. It is a genocide often cited since then to justify military intervention in similar ongoing atrocities.

But another lesson from Rwanda’s experience deserves to be remembered – an amazing reconciliation of killers and survivors through individual confession and forgiveness in nonjudicial village courts.

This type of reparative justice in an intimate setting could prove useful in countries that will need post-conflict healing, such as Syria, Colombia, and Myanmar (Burma). It might also help prevent a cycle of revenge and retribution in those countries, as it has in Rwanda.

Most of Rwanda’s main perpetrators in the genocide have been tried in regular courts, either in Rwanda, Europe,, or the International Criminal Tribunal for Rwanda, set up by the United Nations. But for hundreds of thousands of others who were charged with killing, the Rwandan criminal-justice system was too weak and its jails too full. Legal trials would have taken decades. The country had to fall back on a form of community-based traditional justice known as gacaca.

Other post-conflict countries in transition, notably South Africa, have relied on a similar process with their truth-and-reconciliation commissions. But the bodies have usually been more formal and national in scope. Rwanda’s gacaca are far more personal, designed to achieve the end result of allowing people who knew each other to resume living in the same community. They also bring together an entire village to witness a confession, attest to its sincerity, encourage forgiveness by the victim, and agree on some reparation, such as helping till a victim’s fields for a time.

It hasn’t worked in every case. Many Tutsis who killed Hutus have not been tried. Many victims could not bear the trauma of hearing how their loved ones had died. And many Hutus disappeared or were able to hide from the truth.

The government under President Paul Kagame, despite its drift toward authoritarian rule, has encouraged the process by outlawing formal use of ethnic identities. “The divisionism of before is gone. All of us now have equal access to opportunities,” a young Rwandan told The Christian Science Monitor.

The gacaca rely on the guilty to listen to the stories of their victims with empathy, admit their acts with repentance, and rethink their self-identity within the community. For the victims who forgive, the process can lift feelings of rage and bitterness. Much of the justice lies in the restoration of relationships as much as in material reparations.

Rwanda is not yet a “post-ethnic” African nation. But the possibility of a future political class inciting Hutus and Tutsis to take up violence now seems slim. More Rwandans have a higher sense of identity.

As the world helps Rwanda mark the 1994 genocide, it should also spread the lessons of this post-genocide reconciliation. Dispute resolution is a common technique in every society, whether in families or courts. But when almost every village in an entire nation goes through it, the lesson is worth repeating elsewhere.