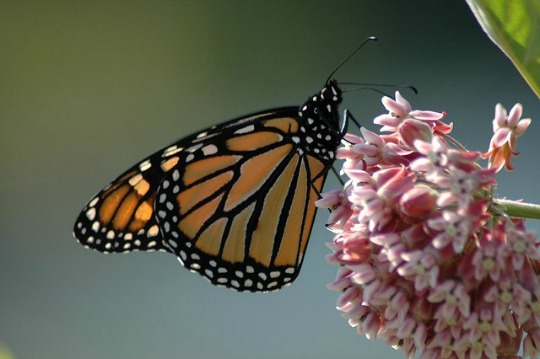 The monarch butterflies’ numbers have been plummeting in recent years, and a new study has pointed to the likely main culprit: loss of its summer habitat as a result of genetically modified crops.

The findings from researchers with the University of Guelph were published Wednesday in the Journal of Animal Ecology.

A report issued earlier this year from the World Wildlife Fund and Mexico’s National Commission for Protected Areas pointed to three main factors threatening the pollinators: deforestation and forest degradation in monarch reserves that serve as their winter habitat in Mexico, habitat loss due to land use changes and the loss of its larval food plant—milkweed—as a result of the widespread use of the herbicide glyphosate, and weather extremes.

The new study, however, puts the main cause of the crisis squarely on its summer habitat loss in the United States. 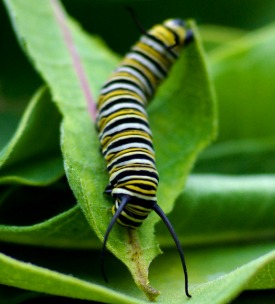 A monarch caterpillar on a milkweed leaf. (Photo: forevertrusting/cc/flickr)

But the number of milkweed plants has been plummeting—21 percent between 1995 and 2013—especially in the Corn Belt, home to widespread planting of crops that have been genetically modified to be resistant to glyphosate, the main ingredient in Monsanto’s herbicide Roundup. The region is also “monarch corridor,” as Monarch Watch Director Chip Ward has described, because it serves as critical summer and spring breeding grounds for a large proportion of monarchs

“Our work provides the first evidence that monarch butterfly numbers in eastern North America are most sensitive to changes in the availability of milkweed on breeding grounds, particularly in the Corn Belt region of the United States,” stated Ryan Norris, a professor in Guelph’s Department of Integrative Biology and study co-author.

Efforts by the Mexican government to conserve winter monarch habitat have “no doubt gone a long way towards conserving monarchs that breed throughout eastern North America,” stated lead author and current University of Guelph post-doctoral researcher Tyler Flockhart. “However, our results provide evidence that there is now another imminent threat.”

Speaking with CBC News, Norris said that “likely the biggest cause of loss of milkweed is the adoption of genetically modified crops.”

The study also predicts further declines in the population of 14 percent, and a 5 percent chance the species goes nearly extinct within a centruy.

So how do we stop the population free-fall?

“Reducing the negative effects of milkweed loss in the breeding grounds should be the top conservation priority to slow or halt future population declines of the monarch in North America,” Flockhart stated.

To do that, Norris added, “Planting milkweed in the south and central United States would provide the largest immediate benefit.”

Encouraging the planting of milkweed is something Ward’s Monarch Watch has been encouraging for years, and in a monarch “recovery plan” he states:

The monarch migration can be saved if there is commitment to the two propositions outlined in the premise to 1) offset annual losses of habitat by planting milkweeds and nectar plants in areas from which they have been extirpated and 2) develop the capacity to plant milkweeds over large landscapes. Both projects require the development of greater capacity to restore milkweeds than exists at present.

But that capacity, though costly, could be implemented within a few years, he adds.

In addition to the efforts individuals can make in restoring the habitat, the study’s findings point to a need for a fundamental shift away from current, herbicide-reliant agricultural practices and ethanol mandates that have incentivized corn monocultures and destroyed milkweed.