“Child marriage is rooted in unequal gender status and power relations that can result in the perpetual subjugation of girls and women. In the absence of viable legal remedies, discriminatory cultural practices based on stereotypical views of women’s roles and sexuality are among the structural causes of child and forced marriage,” said Flavia Pansieri, Deputy UN high Commissioner for Human Rights. 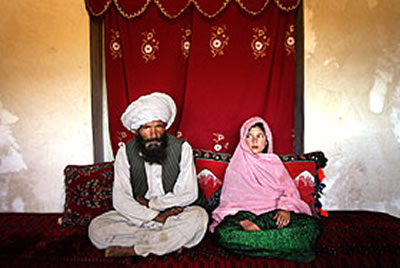 Pansieri was speaking at a panel discussion, during the June session of the Human Rights Council in Geneva, which analysed the root causes and challenges of child, early and forced marriage. Panellists also discussed some of the achievements and best practises to prevent and end the practice.

“The often wide age and power differentials between brides and husbands undermine the agency and autonomy of girls and young women,” Pansieri added. “The result is exposure to physical, psychological, economic and sexual violence; forced labour; so-called “honour” crimes; domestic slavery; and restrictions on their movement.”

“For millions of girls, discrimination on the grounds of sex and gender starts from their very birth. Even in countries with constitutions and laws that comply with the Convention, because of custom, tradition and/ or the failure to enforce domestic legal provisions, girls’ childhood often ends by girls becoming ‘girl brides’, by becoming the victims of discrimination.”

Kate Gilmore, Deputy Executive Director at the UN Population Fund, said that forced marriage was the thief that robbed girls of their childhood, their active participation in the world, and their exploration and realisation of themselves. She gave staggering figures on the prevalence of child marriages.

“Each day, 39,000 girls are married or joined in union without their free, prior and informed consent, without an option to do otherwise, or an understanding of the implications and contract for the remainder of their lives,” she said. “Married long before they become the adults that is indeed their right to become; married thus in violation of their human rights.”

“Rigid and suffocating control over women’s and girls’ rights in order to protect their chastity and family honour, ensures that girls have no option to explore their sexuality except within marriage,” she said. “In many countries and contexts the stigma over loosing virginity before marriage is very high, leading to an increased risk of extreme violence in society and often within families.”

The Special Rapporteur on the rights of women at the African Commission on Human and Peoples Rights, Soyata Maiga, described the ways in which the Commission addressed the continuing discriminatory harmful practice in Africa. It recommended that States remove all legislative provisions that discriminated against women and children; harmonise national legislation with regional obligations, including the obligation to raise the minimum age of marriage to 18; and include sexual and reproductive health education in school curriculums.

Maiga stressed that in addition to legislative measures, education programmes and support to employment of educated young women were equally important. She highlighted that an all-African campaign had been launched in May 2014 calling for everyone to mobilize against child and forced marriage.

Ayman Sadek, Upper Egypt Programme Manager at Plan International, referred to his organization’s global campaign to end child and forced marriage, “Because I am a Girl”. Plan International works on three levels of change: with institutions and Government to change laws and policies; with families and communities to change social structures and challenge harmful norms; and with individuals to empower boys and girls.

“Experience in Egypt and in other regions shows that it is not enough to work with girls. Boys and men have a critical role to play in ending the cycle of child and early marriage with families,” Sadek stressed. “Men often occupy positions of power in families and communities where fathers, brothers, husbands and policy-makers hold much of the decision making power that allow the practice to continue.”