The Death of International Development

The development industry needs an overhaul of strategy, not a change of language. 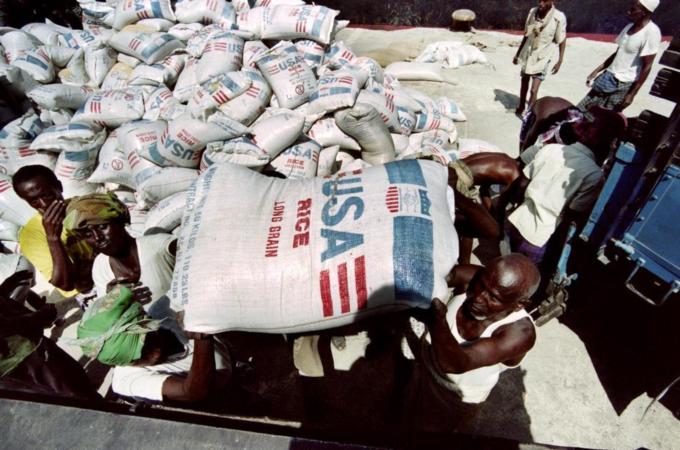 Poverty is created by rules that rig the economy in the interests of the rich. [AFP]

International development is dying; people just don’t buy it anymore. The West has been engaged in the project for more than six decades now, but the number of poor people in the world is growing, not shrinking, and inequality between rich and poor continues to widen instead of narrow. People know this, and they are abandoning the official story of development in droves. They no longer believe that foreign aid is some kind of silver bullet, that donating to charities will solve anything, or that Bono and Bill Gates can save the world.

This crisis of confidence has become so acute that the development community is scrambling to respond. The Gates Foundation recently spearheaded a process called the Narrative Project with some of the world’s biggest NGOs – Oxfam, Save the Children, One, etc. – in a last-ditch attempt to turn the tide of defection. They commissioned research to figure out what people thought about development, and their findings revealed a sea change in public attitudes. People are no longer moved by depictions of the poor as pitiable, voiceless “others” who need to be rescued by heroic white people – a racist narrative that has lost all its former currency; rather, they have come to see poverty as a matter of injustice.

These findings clearly demonstrate that people are beginning to reject the aid-centric approach to development. But instead of taking this as an opportunity to face up to their failures and change the way the industry works, the Gates Foundation and its partner NGOs have decided to stick with business as usual – but to cloak it with fresh language.

Leaked internal documents make it clear that the Narrative Project is nothing more than a PR campaign – a bid to “change public attitudes” by rolling out fresh language that will be more effective at securing public support and donations. The strategy goes like this: Talk about the poor as “equals” who share our values; emphasise that development is a “partnership”; stop casting rich people and celebrities as saviours of the poor; and above all, play up the idea of “self-reliance” and “independence”, with special attention to empowering women and girls. Progressive Westerners love this stuff.

This new framing amounts to little more than a propaganda strategy. Instead of changing their actual approach to development, the Narrative Project just wants to make people think they’re changing it. In the end, the existing aid paradigm remains intact, and the real problems remain unaddressed.

Why do people no longer believe in the charity and aid-centric model of development? According to the Narrative Project, it’s because they’re all a bit stupid. They let their personal beliefs override the “facts”. They’re “old” and “conservative”. And they’re too calloused to care about social causes. It doesn’t occur to the development industry that people might have good reasons for their scepticism. And there are many.

For one, the aid project is in fact failing. There have been some achievements, to be sure, but the Gates Foundation and official sources like the UN want the public to believe that these piecemeal gains are tantamount to overall success. They tell us that poverty has been cut in half in the last fifteen years or so, but independent watchdogs have repeatedly shown that this claim rests on statistical sleight-of-hand. Moreover, it relies on a poverty line of $1.25 a day, which no longer has any credibility. A more realistic line of $2.50 – the absolute minimum for achieving normal human life expectancy – shows that 3.1bn people remain in poverty today, which is 352m more people than in 1981, according to a 2008 study.

And all the while, the wealth ratio between the richest and poorest countries has grown from 44:1 in 1973 to nearly 80:1 today (according to my estimation). The richest 85 people in the world (Mr Gates being one of them) now have more wealth than the poorest 3.5 billion, or half the world’s population.

The aid project is failing because it misses the point about poverty. It assumes that poverty is a natural phenomenon, disconnected from the rich world, and that poor people and countries just need a little bit of charity to help them out. People are smarter than that. They know that poverty is a feature of the global economic system that it is very often caused by people, including some of the people who run or profit from the aid agenda. People have become increasingly aware – particularly since the 2008 crash – that poverty is created by rules that rig the economy in the interests of the rich.

A system of plunder

We can trace this rigging process through history. The programmes that global South countries used successfully to build their economies and reduce poverty after the end of colonialism – trade tariffs, subsidies, social spending on healthcare and education – were in many cases actively destroyed by Western intervention in the name of “development”.  Western-backed coups in Iran in 1953, Guatemala in 1954, Congo in 1961, Brazil in 1964, Indonesia in 1965, Chile in 1973 – to name just a few – deposed democratically elected leaders with pro-poor platforms to install dictators friendly to multinational corporations. Most of these dictators received billions of dollars in “aid” from Western governments.

When coups fell out of favour with the voting public, the World Bank and the IMF stepped in instead. They leveraged debts to impose crushing “structural adjustment” programmes on poor countries, forcing them to privatise public assets, open their markets to Western goods, cut social spending and reduce wages, and give foreign companies access to extra cheap labour and raw materials. Structural adjustment was one of the greatest single causes of poverty in the global South in the 20th century, and it continues to this day under the guise of “austerity” .

Right now, developing countries lose as much as $900bn each year to tax evasion by multinational companies through trade mispricing, and almost the same sum again through transfer pricing. They lose another $600bn each year in debt service to mostly firslt world banks. These losses alone amount to nearly 20 times more than the total flow of aid, which is a paltry $135bn – and that’s not counting land grabs and other forms of resource theft.

All of this makes it clear that poverty is not a natural condition. It is a state of plunder. It is delusional to believe that charity and aid are meaningful solutions to this kind of problem.

Some people in the NGO community know this all too well, and they are calling for genuine political change: The democratisation of the World Bank and the IMF, fairer trade rules, and an end to tax evasion. But because the leadership at the Gates Foundation and some NGOs find these issues inconvenient  such alternative voices are being side-lined in favour of a disingenuous attempt to “fix” public attitudes by pushing ever harder on the same old charity and aid story.

If the Gates Foundation and NGO leadership want to get serious about tackling poverty, they might start by talking to the public about the importance of releasing developing countries from the siphons of rich countries and their corporations. They might help put the final nails in the coffin of the paternalistic story of charity and aid, white saviours and poor brown victims, and tell the real story about how the rich get richer off the backs of the poor. That would be a true starting point for development in the 21st century.

Dr Jason Hickel lectures at the London School of Economics and serves as an adviser to /The Rules.

Martin Kirk, Global Campaigns Director of /The Rules, contributed to the analysis for this article.