What You Don’t Know Will Alarm You 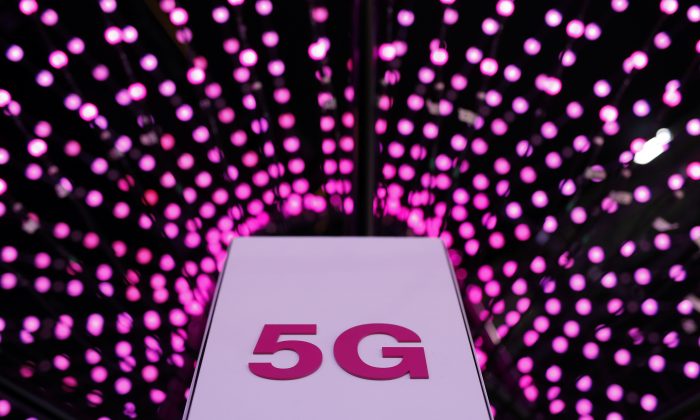 A 5G antenna at the Deutsche Telekom stand on the first day of the Mobile World Congress (MWC) in Barcelona on Feb. 26, 2018. (Pau Barrena/AFP/Getty Images)

The crime scene was straight out of an Alfred Hitchcock movie. One hundred and fifty dead birds lay sprawled on the ground, fallen out of trees in a park in The Hague, Netherlands.

The second such occurrence last autumn made Dutch citizens look up and wonder. With robust starlings turned upside-down at their feet, the usual suspects of disease, pollution, and foul play were dismissed.

The culprit stood atop a nearby train station—a mast with new 5G network antennas. The test of the telecom system failed in more ways than imagined. As a result, the Dutch ministry postponed its 5G-spectrum auction until 2020.

For decades, the telecommunications industry and governments haven’t invested enough money on safety studies of electromagnetic field (EMF) and radio frequency (RF), and their effects on human health.

This neglect is despite a joint 2011 press release from the World Health Organization (WHO) and the International Agency for Research on Cancer (IARC) that stated they found EMF radiation “possibly carcinogenic to humans.”

Radio-frequency pollution has been overlooked for its potential health effects on people. It’s not just the rollout of 5G networks that are a cause for concern. Extremely low frequencies from Wi-Fi routers, hotspots, and cellphones also pose a serious threat, particularly to children.

The Promise of the Digital Age

The allure of 5G’s super-fast download speeds will be broad and pervasive, but will come with a hidden cost of invisible RF transmissions, electromagnetic radiation, and constant receiving/transmitting of Wi-Fi signals that most people overlook as benign.

Dr. Martin Pall, professor emeritus at Washington State University and one of the leading EMF experts in the world, presented at the National Institute of Health about the dangers of 5G, stating: “Each of these EMF effects will lead to existential threats to our survival … In mice, EMF led to a drop in reproduction to essentially zero. … 5G will incur much higher frequencies and pulsations to that of being in a microwave.”

From Pall’s last slide, he read:

“The current plan, which has already been approved by the U.S. Congress and the FCC, is to put tens of millions of 5G antennae, irradiating every single person and other organisms in the whole country, without even a single biological safety test of genuine 5G radiation … That is absolutely insane.”

The Environmental Protection Agency (EPA) has failed to study EMF effects on human health, failed to create safety standards and, in 1979, stopped measuring EMF radiation. On the agency’s website, there’s a link to an outdated 1992 report, “Questions and Answers about Electric and Magnetic Fields.”

The WHO is even more egregious for its failure to inform the public of the dangers of EMF radiation. A visit to its website and the sparse amount of obsolete material on EMF leads one to question the organization’s charter. Posted on the WHO’s website are six EMF studies: 1981, 1983, 1987, 1993, 2004, and 2007, and four publications that predate 2004.

Coming from the global gatekeeper of human health, which deemed EMF radiation “possibly carcinogenic” eight years ago, the WHO’s failure to inform is astonishing.

While the Trump administration will roll out a plan to reform the U.S. government, streamlining the agencies’ scope, reporting structures, and consolidating different bureaus, the 132-page document fails to mention the telecom industry at its next pivotal evolutionary step.

As a result, the Federal Communications Commission (FCC) will remain in charge of health and safety of 5G radiation, regardless of its organization chart being light on health-safety oversight.

The Science of EMF Effects

Only last fall did citizens join the chorus of scientists that forced Michigan legislators to hold EMF hearings and Sen. Richard Blumenthal (D-Conn.) to raise the alarm on 5G.

Blumenthal challenged the telecom industry to “prove 5G is safe.”

During a Skype interview, Dr. Fiorella Belpoggi, director of research at the Cesare Maltoni Cancer Research Center, Ramazzini Institute, in Bologna, Italy, explained the issues of EMF radiation and the threat that 5G poses.

“Low-intensity spectrum RF is dangerous to humans. The environmental exposures consist of tumors of the brain and the heart nervous cells,”

Belpoggi stated. The mechanisms for that are not at the skin level with thermal heat, such as exposure to the sun, but at the cellular level in all living organisms.

“In Europe, epidemiology studies of cell towers have also found acoustic nerve tumors and facial tumors,” she said. “The effects lie dormant for years. It’s the latency timeline that’s a problem. Cancers often do not appear for 20 or 30 years. With the screens generation, we see cancer-causing problems starting in the embryo.”

“At the cell level, mitochondria (the energy store) and metabolism (diabetes) are deeply affected by ion nervous pulses,” she said. “Millimeter waves are not well known; more studies are needed. I fear 5G might be like asbestos, spreading everywhere through society, only to notice—too late—of the damage it has done.”

Belpoggi emphasized that low frequency has the same effect as EMF with “just shorter wavelengths and different frequencies, but the same overall effect.”

The problem with 5G is that its wavelengths transmit over shorter distances than 4G. That means 5G networks require millions more antennae to be installed over the next decade than today’s 4G cell towers. 5G antennas will be seen out in the open, everywhere, fixed to light and telephone poles and on rooftops at homes, schools, transport hubs, and office buildings. They will be pervasive and widespread.

“EMF and RF waves corrupt human DNA. They contribute to the environmental impact of autism, Parkinson’s disease, cancers, and low sperm count. We need to redeploy money from other parts of society, industry, and government and make this a No. 1 priority,” Belpoggi said, calling the current state an “insane policy, where technology is more important than human health.”

By year-end, Belpoggi’s lab will publish a study on EMF effects on 2,800 rats, with 1,000 rats as control. They will observe all organs. The study was funded by 30,000 local citizens, since the Ramazzini Institute is a nonprofit that no government or industry influences. The institute collaborates with top global scientists with expertise in toxicology and oncology, and has been sharing data with U.S. institutions since 2000.

In the United States, Dr. Sharon Goldberg, an expert witness, responded to an email query of the top three health concerns that 5G and the internet of things pose.

Goldberg’s testimony before the Michigan House Energy Policy Committee captured the state legislature’s attention, and the public’s. A pair of YouTube videos accrued more than 650,000 views.

To date, only teams of scientists—with petitions and hard-to-find websites—have voiced their concern and posted current valuable data on EMF exposure. That should be the impetus for the EPA, FCC, and the WHO to act, invest in research, educate the public, and update their archaic information on technology that will impact all plants, people, insects, and animals.

A moratorium on the installation of 5G networks must be a top priority.

James Grundvig is the author of Master Manipulator: The Explosive True Story of Fraud, Embezzlement and Government Betrayal at the CDC. He lives and works in New York City.