Ever since the 1965 US-orchestrated military coup, which resulted in between 1 and 3 million people losing their lives, Indonesia has one of the most unregulated markets and profit driven regimes in the world.

Its rampant capitalism combined with endemic corruption and absolute disregard for the poor majority, is devouring resources that in more moderate societies would be used for social programs and the development of infrastructure.

The crash of ‘Indonesia Air Asia’ flight QZ-8501 en route from Surabaya (the second largest Indonesian city) to Singapore, on 28 December 2014, was the latest incident in a series of Indonesian air disasters over the last decade. The country’s infrastructure is in shambles, from clogged road systems, to badly maintained ferries. Trains (only few lines are left) keep derailing, ships are sinking and airplanes are falling from the skies. 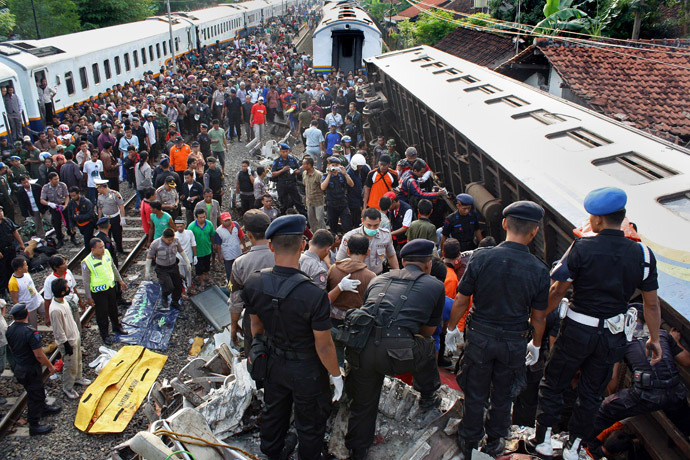 This picture shows a general view of the train accident in Pemalang on October 2, 2010 where at least 36 people were killed earlier in the day when the passenger train slammed into the back of another train. (AFP Photo)

Until now, for safety reasons, many Indonesian airlines have been banned from flying to the European Union, and till just recently, the ban covered all Indonesian carriers.

It is because the country has one of the highest air accident rates anywhere in the world, exceeding those in many war-torn countries.

On many occasions, writing books and making films about Indonesia, I encountered hair-raising near calls: missed runways here and there, near mid-air collisions, landing gear failing to extend even from a Boeing 747. Flying Indonesia airlines is like playing ‘Russian roulette.’

On top of this, Indonesian airports, as well as their navigation systems, are completely out of date.

Reuters mentioned, in connection with the recent air disaster that Indonesian traffic controllers compared to “Singapore and elsewhere in the world use “outdated equipment.” And that’s putting it mildly!”

“In my opinion, the Air Asia tragedy happened because of human error. Pilot should have known about the dangerous Cumulonimbus clouds, when they were still at a fair distance of 100 miles from the airplane. He was well aware that the traffic was heavy on that route, and it was not so easy to change the flight pattern at the last moment, especially to request ‘going up’. I think how he handled the situation was totally wrong. He should have returned to base. Even if he could have brought the plane up to much higher altitude, the maneuver would have been very risky. The plane was full, it was heavy, and there would have been great burden added to the engines. And also, the weather was damp, which generally decreases performance of the engines.

I think the pilot took a series of wrong decisions. He took matters too lightly.

In my opinion, we should rethink the process of the recruitment of civilian pilots, especially when it comes to the recruitment of ex-Indonesian Air Force pilots. They do have a different mentality. As soldiers, they were trained to be brave and tough. As civilian pilots, they should think first about the safety of the passengers. When faced with emergencies or extreme dangers, civilian and the military pilots should act differently.”

“Hundreds of people, including young children, turned out to the vigil in Surabaya on Wednesday evening.

Surabaya’s Mayor Tri Rismaharini said: “Let us pray for the grieving families of those on board the plane. Let us pray this will be the last tragedy for Surabaya.”

On closer examination, there was hardly any ‘intrusion from above.’

According to the investigators, the ill-fated Air Asia flight from Surabaya to Singapore nearly flew into the heavy clouds. The pilot requested an increase of altitude to 38,000 feet and received permission within a few minutes to go up to 34,000 feet. The tower received no verbal reply from the cockpit, but it was electronically registered that the plane went up at an unacceptable angle. The pilots managed to stall the plane. Consequently, the Airbus 320-200 drastically lost speed and went down, crashing into the sea.

That has nothing to do with some divine intervention. It only speaks of bad communication between the air traffic controllers and the cockpit, and of the terrible skills of the pilots.

Insults are once again flying about

The Indonesian pro-Western regime has a bad habit of bashing far richer and socially much more balanced Malaysia, whenever it has the slightest opportunity.

Air Asia is a major discount airline based at Kuala Lumpur International Airport (KLIA), outside the Malaysian capitals Putra Jaya and Kuala Lumpur. The airline had an impeccable safety record, with not one human life lost in any accident, until December 28, 2014. 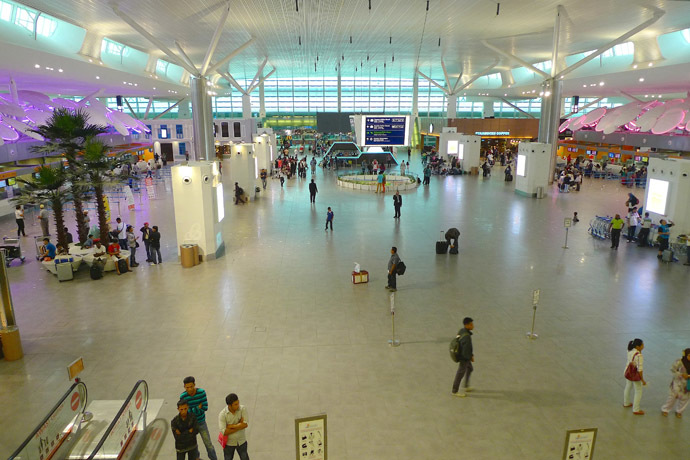 Air Asia flies to Europe, Australia and all over the Asian continent, constantly expanding its network and winning international awards. It operates safely and comfortably to several cities in neighboring Indonesia, including Jakarta, Bandung, Medan, Denpasar (Bali) and Surabaya.

Flight QZ-8501 was operated by Air Asia Indonesia, a sister airline, in which Indonesian investors (Fersindo Nusaperkasa, Ltd.), since the beginning, roughly a decade ago, holds a decisive stake of 51 percent. Air Asia Indonesia crews are mainly recruited domestically.

It is true that, as some investigators are pointing out, the flight was not supposed to be operating on that particular day. But in Southeast Asia, cancellations and rescheduling are common, even a norm, and in this case, the change did not appear to originate at the Kuala Lumpur headquarters.

For many years and decades and in the most vulgar manner, plane crashes have been exploited by the mass media. As if lives lost 30,000 feet above the ground or in the oceans were more valuable than those taken by calamities, misery, hunger or preventable diseases, especially in poor neighborhoods and slums.

The Air Asia flight QZ-8501 disaster brought unprecedented outpourings of sorrow in all corners of this sprawling and socially collapsed archipelago.

As in a soap opera, even those who could never afford to buy an airplane ticket were now grieving over the lost lives of those who could afford to fly to Singapore, one of the most expensive cities on earth, just for holidays.

The tragedy was hyped up in a media circus driven by the turbo-commercialized and vulgar Indonesian media, especially its television stations.

In Indonesia, where all frontiers between what should and should not be acceptable have collapsed, and the suffering of others is always in vogue, all natural and man-made disasters trigger aggressive and tasteless coverage, all of which generates great revenues for radio and TV stations.

If Indonesian reporters could stick their lenses and microphones straight into a morgue, they definitely would.

Ms. Ira, a teacher from the city of Bandung, said that the coverage had become thoroughly unacceptable:

“Several TV stations are broadcasting day and night, all the details related to the AA flight that crashed. But their reporters are stupid and outrageously disrespectful. They have no clue how to ask questions. For instance, the families of victims are being asked again and again ‘how do they feel’?”

The country is in a parlous state, but thanks to the Western mass media and the servility of the local press, the country is not being presented in the press as a ‘case study’ showing that capitalism simply cannot work in a plundered and miserably poor neo-colony of the West.

Even those dealing with commodities are aware that business practices have gone terribly wrong.

“In Indonesia, we have a mindset that we have to reach the break-even point for investment as fast as possible. That is why, the minimum maintenance is provided. And even after we reached BEP, the behavior does not change. [The] aviation business is no excerption. I observe that when I am transiting, they only do refueling and cabin cleaning. It is very rare that we see ground technical staff checking the plane. All they think of is the income – really bad business behavior.

As for navigation equipment, I think in Indonesia we are not up to date. Traffic increases but there is hardly any improvement to the equipment. In West Papua, they are still using manual navigation. Planes can’t take off or land at dusk and dawn.”

Cancelling New Year’s Eve celebrations is nothing more than sheer lunacy and hypocrisy.

Mr. Andi, an IT manager and Surabaya resident, is outraged:

“The mayor of Surabaya banned festivities, and urged people to pray. Instead of praying, they should be doing something about real problems the city is facing: like thousands who are dying from untreated illnesses, malnutrition and traffic accidents.”

Surabaya — a city of over 3 million inhabitants is facing an endless chain of disastrous indicators more common in Sub-Saharan Africa, than in the Asia Pacific region: from crumbling health, sanitation, education, to a total lack of public transportation, cultural institutions and public spaces. Hundreds of people are dying, daily, because of extreme poverty, malnutrition, inefficient hospitals, toxic water, and rampant crime.

Instead of praying, Surabaya’s Mayor Tri Rismaharini should be promoting improvements at the airports (Surabaya’s Juanda Airport inaugurated one new terminal in 2014, but it already looked insufficient and outdated, even before it became fully operational) as well as a total overhaul of the traffic control and the navigation systems. She should be also demanding that Indonesian pilots get at least some basic training.

Ms. Susy Nataliwati, researcher in Japanese Studies at the University of Indonesia, points out:

“The victims are from at least the middle class level of the society and so the government is paying attention to them. Those who are poor and die during the ferry disasters, for instance, get no such consideration whatsoever…”

There is not much to celebrate in Surabaya, a city which barely produces anything and only consumes; the city is divided between a few rich families, a small middle class, while the majority live in dire misery and abject poverty.

But the poor majority is definitely not what Surabaya’s mayor had in mind when she banned the New Year’s Eve celebrations.

Andre Vltchek is a novelist, filmmaker and investigative journalist. He has covered wars and conflicts in dozens of countries.