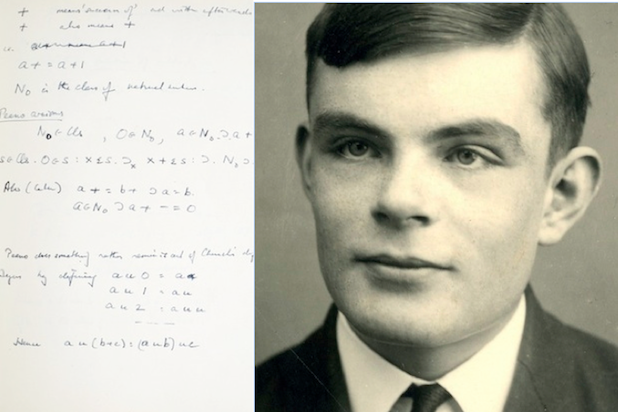 This gay atheist man saved more lives in World War II than any other single person. It is estimated that his contribution saved the lives of over 14 million people. The allies won the war decisively and much quicker than it would have if not for the fact that this man broke the “unbreakable” enigma code.

Turing is also the father of modern computer science and the development of artificial intelligence. If he had not lived the world would be a far different place today. If not for Turing the war may have lasted until 1947 or 1949.

In this respect his contribution towards winning the war was greater than Churchill, Eisenhower and Stalin combined. Without him the NAZI’s may have been the first to deploy an atomic bomb with the ability to strike the United States.

This one man made one hell of a difference. In fact many of us would not be alive today if this gay man, this atheist had not lived.

And yet in 1952 he was charged with gross indecency and sentenced to two years in prison. His crime – he was a homosexual and it was discovered he had a relationship with another man. He was offered an alternative to prison – chemical castration. It destroyed his health and caused depression.

As a result of his conviction for his “crime” he lost his security clearance and his job, and was denied entry into the United States because he was considered a sexual deviant.

In 1954 he was dead at 41 of suspected suicide. He was given a posthumous pardon for his “crime” by Queen Elizabeth in 2013 and it took a movie, The Imitation Game to finally give recognition to one of the greatest heroes of the 20th Century.

And yet 60 years after his death the persecution of homosexuals continues. Gays are no longer chemically castrated or sentenced to prison in Europe or North America but they are discriminated against and made the object of hateful people and institutions. In other places Gays are still murdered and imprisoned, flogged and beaten.

This man persecuted by a society for his sexual orientation and hated by so many for his atheistic beliefs saved so many from the violence of a world gone insane, and yet because he was not what the majority consider “normal” he has been unrecognized for six decades since his tragic death.

But still the hate and the discrimination continue by so many people whose bigoted beliefs allow such despicable behavior to continue in the name of their God or their politics.

Turing was convicted of indecency by an indecent society, as a reward for ending the violence of the insanity of a society that in the name of religion, democracy, heterosexuality, and racism almost brought civilization to an end.

And yet we remember Hitler, Stalin, Churchill, Patton, Montgomery, Mussolini. DeGaulle, Eisenhower and even the craven Chamberlain but we virtually forgotten the man whose incredible intelligence did more than all of them put together to stop the madness of World War II.

Alan Turing was one of these people and he should never be forgotten.

Anticopyright: Editorials and articles originated on TMS may be freely reprinted, disseminated, translated and used as background material, provided an acknowledgement and link to the source, TMS: How a Gay Man Saved 14 Million Lives – Alan Turing, is included. Thank you.