A Template for Our Global Era: The Lexical Nexus of Proportion, Process, Ideology

Human survival and wellbeing are now embedded in a complex interdependent global web of economic, political, social, technical, and environmental events, forces, and changes. The proportion, processes, and ideologies emerging in our global era challenge our individual and collective wellbeing by confronting us, directly and indirectly, with an array of complex, conflicting, and confusing demands and opportunities. Our response to this challenge will shape the nature, quality, meaning, and survival of our lives in this century. 1, 2, 3

Proportion refers to the magnitude of various sectors of society. Process refers to the means or actions by which these sectors function in the acquisition and distribution of power. Ideology refers to the belief and value systems influencing (guiding, shaping, controlling) individual and collective behavior.

Failure to grasp the global-era proportion, process, and ideological determinants and consequences of our lives can result in bewilderment with associated passivity, compliance, and submission. We become content with “just enough!” (4) Global-era proportion, process, and ideology are positioned at the top of a formidable social-formation eluding citizen control and participation. We have become actors in a global-era drama confined to limited roles. This must change!

The article alerts us to the nature of what is occurring by sharing a “lexical nexus” of proportion, process, and ideology. The “lexical nexus” speaks to the denotative and connotative semantics of the scale and relations of “words” and “concepts” enabling an increasing domination and control of human and natural life by individuals, governments, corporations, and other organizations and institutions with specific self-interests and intentions. Figure 1 offers a graphic display of the “template” — the lexical nexus — I will discuss. I offer tabular lists of examples of “lexicons” for each concept. While I do not pursue specific examples of dynamic relationships across the “concepts,” I do extend discussion to issues of dystopian and utopian implications. 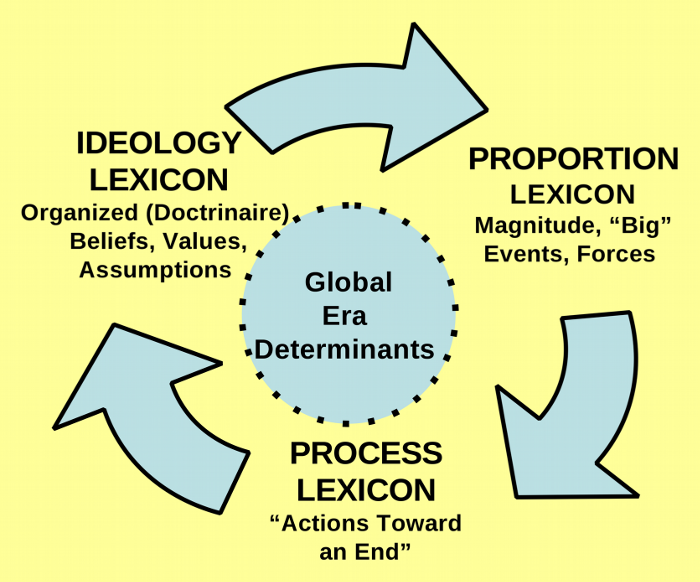 The challenges before us in our global era are many, varied, and complex. It is not an accident that institutions and organizations have grown to such massive proportion. Global contexts elicit global scale. Nor is it an accident processes and ideologies (as both nouns and verbs) have assumed global scale. It is the nature of our times!

The global scale is frightening. Its immensity resists interventions and preventions for lesser eras. We were unprepared for the levels of interdependency of our lives, and their associated moral responsibilities, duties, and obligations. 1, 2, 3 Our prior sense of agency — empowerment, confidence, and trust in institutions have been erased. We now speak — sometimes in whispers – of totalitarian control and domination,5 even as we recognize our powerlessness and submission to the “just enough” principle.

History is the story of massive events, forces, and powers shaping our lives; but history it is also the story of individuals resisting abuses and exploitation to address the consequences of these massive levels upon their lives. I am reminded of the timeless words of Rabbi Tarphon (circa 200CE) who wrote: “While the task is not upon thee to complete, neither are thou free to desist from doing your part.” To Rabbi Tarphon, I say: Dayenu!

Proportion refers to the magnitude or scale of various sectors of society. Magnitude carries with it an implicit and explicit power for control and domination.

Examples of the Lexicon of

Present organizational and institutional sectors of our society are typically prefaced or described with the term “Big!” Some dislike the term “Big,” arguing it misrepresents a natural evolution to a global level. Multinational corporations were essential to maximize markets and profit for owners and shareholders. In contrast, many consider the consolidation of wealth, power, and position in these “Big” sectors a threat to individuals and nations. Traditional rights and privileges are sacrificed in favor of “required” monolithic organizational and institutional structures.

Mergers across different organizations within similar sectors insured continued existence of industries and enterprises. Merge, re-organize, cut duplicate expenses and costs, release staff, and a new and more powerful “entity” is born by concentrating power and influence, often to the point of totalitarian control. 5

Proportion, or the magnitude of these sectors, connects with various process words producing a complex dynamic exceeding our understanding. Some disagree with this conclusion; but it is warranted. The human need for agency is lost to organizations and institutions distant from active or consequential participation.

Callous disregard of rights, privileges, and lives of citizens is being sacrificed to disproportionate governmental, commercial, and private sectors. Proportion must be reconsidered, and reduced through regulation, law, and social activism favoring smaller levels of living. Monopolistic privileges serve destructive purposes. The lessons of the 19th and 20th Century “Gilded Age” in the United States of America should not be forgotten!

Process refers to the means by which these sectors function in the acquisition and distribution of power. Power denotes and connotes supremacy, authority, and domination. In combination with the “Big” proportion, a process lexicon calls attention to nouns and verbs dominating the macro-social times in which we are living.   Process terms cited are both nouns and verbs – they can also assume the forms of adjectives and adverbs.

As these words enter our vocabulary, and grasp their meaning and implications; they enrich our understanding of the global-era forces, events, and individuals shaping our lives. We come to grasp the world we are living in is being “over-determined” by macro-level proportions and processes.

An ideology is an organized/coherent set of assumptions, premises, and/or beliefs that constitute and/or guide an individual or a collective’s goals, expectations, aspirations, and foundations. Belief is the key here! The power of beliefs is well known. We are willing to die for certain beliefs, holding them before us as undeniable treasures, whether they be religious, political, or moral beliefs. Beliefs become codified in rituals, symbols, and doctrine statements. They are often over-learned, becoming deeply ingrained in our minds and bodies.

The power of an ideology resides in its capacity to order, inspire, and motivate. Perhaps “impel” or “compel,” should be added to its capacity.   Ideologies are — or can become — wellsprings of identity, purpose, and meaning in our lives. In this respect, they justify, rationalize, and authorize all behavior — moral or immoral. Human history is the story of disputes, conflict, violence, revolutions, and wars in pursuing ideological supremacy.

“Examples of Lexicon of Isms”

The identification and listing of lexicons associated with proportion, process, and ideology in our global era leads naturally to questions of our future. Utopias and dystopias are not new terms! Humans have been concerned with their causes, dynamics, and consequences throughout history. I am particularly I impressed at this time with examples of fiction novels addressing fears and anxieties about totalitarian control.

I recently wrote about the risks of a totalitarian world 5 prompted by the growing surveillance, monitoring, and archiving of our private lives. Of special note is the reality this activity is no longer solely a government role; private corporations and agencies have become collectors and holders of “BIG” Data. A tragic consequence is the destruction of diversity in the interests of a limited number of individuals with wealth, power, and position – “homogenization” according to an ordained way of life has become the goal.

Even as we write and speak of dystopias, it is helpful to attend to “Utopian” societies. These are “optimal,” idealistic societies. Throughout history, idealistic visions of collective human possibility have inspired us, and motivated us to build utopian communities.

Are any possible? Should we be driven by their possibilities, even as their existence is distant? The tradeoffs are obvious, and paradoxical. We are told we must choose “security over risk,” “compliance over choice,” “homogenization over diversity,” and “sacrifice over comfort.”

This, we are told, is the new reality of our times. But, these are not tradeoffs, as much as they are impositions — efforts after control — made by governmental policies, decisions, and consequences because of our failed institutions. What will history textbooks say about the times in which we are living? How will they describe the course of events, forces, and people leading to our present situation? How will they describe the emergence and influence of global-era proportion, process, and ideology?

My efforts are incomplete. Forgive me! I am hopeful! Even as this article is incomplete, I hope it will function to inform, to provoke, and to inspire thought and response. History is written each moment of our daily lives. Each passing moment pushes us forward! And, in ways we do not understand, each moment pulls us forward – a mysterious teleology.

History is seamless! We know it and recall it, however, in bits and pieces. In doing so, we destroy history’s power to connect parts to wholes. This is, of course, the art and craft of historians. Great historians acknowledge details, and position and order them in wide arcs of time and consequence.

History, it is said, is written by the victors. Perhaps that is so, but, the victors need to know their tales will one day be rewritten as new victors assume the throne. Who are the current victors? It is impossible to deceive — history catches up! The promises broken by politicians will come to document their legacy!

This article is not a history! It is simply an effort to call attention — increase awareness — to the events, forces, and powers of our time by acknowledging and presenting the lexical nexus of global era proportions, processes, and ideologies. “While the task is not upon thee to complete,” . . .

Anthony J. Marsella, Ph.D., a member of the TRANSCEND Network, is a past president of Psychologists for Social Responsibility, emeritus professor of psychology at the University of Hawaii, and past director of the World Health Organization Psychiatric Research Center in Honolulu. He is known nationally and internationally as a pioneer figure in the study of culture and psychopathology who challenged the ethnocentrism and racial biases of many assumptions, theories, and practices in psychology and psychiatry. In more recent years, he has been writing and lecturing on peace and social justice. He has published 15 edited books, and more than 250 articles, chapters, book reviews, and popular pieces. He can be reached at marsella@hawaii.edu.

This article originally appeared on Transcend Media Service (TMS) on 11 May 2015.

Anticopyright: Editorials and articles originated on TMS may be freely reprinted, disseminated, translated and used as background material, provided an acknowledgement and link to the source, TMS: A Template for Our Global Era: The Lexical Nexus of Proportion, Process, Ideology, is included. Thank you.