All the President’s Psychologists [Full Report] 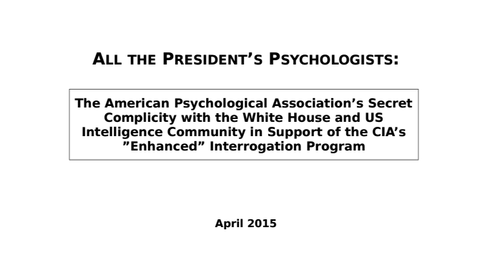 When considering the analysis presented here, it is important to be mindful of the fundamental principles that define and inform the behavior of all health professionals and professional associations. A profession is characterized by a specialized body of knowledge applied in the service of the individual patient and society. It is incumbent upon a profession to disseminate and expand such knowledge, to abide by codes of ethics worthy of the designation of “profession,” including the responsibility to self regulate.

The APA is the largest association of professional psychologists in the United States, and, indeed, the world. As such it plays a major role in setting standards for psychological research, practice, and education. Those standards are a primary mechanism that international standards for health professionals, including such international instruments as the Convention against Torture, become integrated into the practice and standards of US psychologists. Further, APA’s standards and positions exert influence on psychological professionals and associations around the world. The APA lobbies on behalf of funding for psychological research and practice, credentials graduate training programs and internships, and is responsible to protect the interests of psychology as a profession. The APA created and periodically revises a code of ethics that governs the ethical behavior of members and is integrated into or forms the basis of most state licensing requirements for psychologists. That code, like that of other health professions, is based on principles of avoiding harm and improving people’s lives.

These principles undergird the basis of trust in the profession necessary for psychologists being able to help people with some of the most difficult and intimate of life’s problems. Federal regulations require that professional psychologists in the employ of the US government, including those in the military, be licensed by a state and follow the state’s ethics code.

The APA’s complicity in the CIA torture program, by allowing psychologists to administer and calibrate permitted harm, undermines the fundamental ethical standards of the profession. If not carefully understood and rejected by the profession, this may portend a fundamental shift in the profession’s relationship with the people it serves.

This article originally appeared on Transcend Media Service (TMS) on 4 May 2015.

Anticopyright: Editorials and articles originated on TMS may be freely reprinted, disseminated, translated and used as background material, provided an acknowledgement and link to the source, TMS: All the President’s Psychologists [Full Report], is included. Thank you.