Today’s V-Day as a Lost Opportunity for Peace-Making 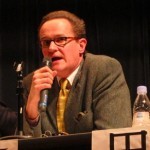 Today, May 9, the citizens and government of Russia commemorate V-Day – that it is 70 years ago they won over Nazi Germany. The price they paid were 20-26 million human beings of which 9 million soldiers. In other European countries, the victory has been celebrated this past week. The total casualties of the Second World War was at least 60 million, depending on how you count.

People and governments care about our own history and sacrifices. The implicit message of course is: Pay respect to those who sacrificed their lives and may it never ever happen again. And the world knows everything about the Holocaust/Shoah that cost the lives of 6 million Jews.

However, the world knows much less about the huge concentration camp in Jasenovac, Croatia, where at least 100.000 Serbs, Jews and Romas was exterminated. Serb suffering didn’t fit the Western narrative during the Yugoslav dissolution wars in which Crotia was only a historically innocent victim and Serbs the cause of it all.

The almost incomprehensible suffering of the Russian and other peoples in the Soviet Union also doesn’t fit the present Western narrative about Ukraine and the new Cold War-like period we are in caused, as experts have pointed out, mainly by four factors: 1) NATO’s expansion all around Russia against all promises given in 1989-90 to President Gorbachev, 2) the EU’s “eiter with us or with them” policy towards Ukraine, 3) the U.S. neo-conservatives’ contribution to the regime change in Kiev and 4) Russia’s annexation of Crimea as a reaction – of which the Western media, PR campaigns and political elites conveniently mentions only the latter.

So, on the order of Washington, all European leaders – recipients of the Nobel Peace Prize – with the remarkable exception of Chancellor Merkel today ignore the sufferings of the Soviet citizens, the veterans and stay away as a protest. Permit me to call it insensitive, shortsighted and narrow-minded.

There can, as real statesmen in post-1945 Europe be no security in Europe against Russia, only together with it – the famous concept of comment security coined by the Olof Palme Commission in the 1980s for which German chancellor Willy Brandt opened the gate with his “Ostpolitik” (1969) and his kneeling down in Warsaw (1970). It signified a humanity, a historical knowledge depth, intellectualism and wisdom lacking in today’s Europe and the U.S.

To not show empathy with the Soviet/Russian suffering is one thing. Worse is that the 70th Anniversary would have been a natural opportunity for Western leaders to meet face-to-face with their Russian, Ukrainian and other counterparts, civilian and military.

When in conflict it is always difficult to be the one who takes the first step – it may look like giving in (but as Danish philosopher and poet Piet Hein has expressed it so well, “The noble art of losing face – may someday save the human race – and turn into eternal merit – what weaker minds would call disgrace.” (Incidentally, he also put peace in a nutshell “Co-existence – or no existence”).

No one would have to lose face by coming to Moscow these very days – OK, do as Merkel does and avoid the military parade at the Red Square, but dialogue, walk, talk and eat and drink together and – in spite of all – celebrate our common humanity, the equal worth of “our” suffering and “your” suffering.

Since so many other leaders are coming including the UN Secretary General – representing in some way the world’s government – the West has now only isolated itself and become a minority that denies or common history and our indisputable connectedness.

After all, only human beings can (re)build confidence. Only personalities can take bold steps towards peace – and peace making is about interaction with the opponent, not ganging up with your friends. Peace is neither military parades like the one in Moscow today nor the huge NATO military build-up and exercises these very days in Northern Norway, the Baltic states, Poland, Romania, base-building, etc. (of which you hear virtually nothing in the free Western press).

We are always told that this or that conflict has no military solution. But the show of force without diplomacy is, in reality, a show of intellectual poverty.

It is indeed sad, for the EU/NATO world itself, that its lack of peace-making capacity comes so forcefully through on this historic day.