How a Corporate Cult Captures and Destroys Our Best Graduates

Amputating Life Close to Its Base

Universities should defend students against lovebombing by banks and consultancy firms – before it ruins their lives. 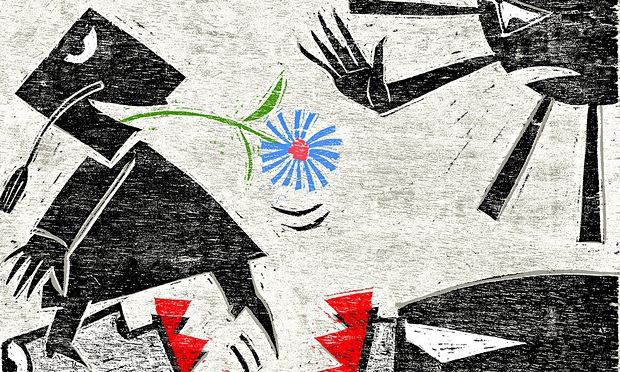 ‘People who had spent the preceding years laying out exultant visions of a better world were suddenly sucked into the mouths of corporations dangling money like angler fish.’ Photograph: Daniel Pudles

To seek enlightenment, intellectual or spiritual; to do good; to love and be loved; to create and to teach: these are the highest purposes of humankind. If there is meaning in life, it lies here.

Those who graduate from the leading universities have more opportunity than most to find such purpose. So why do so many end up in pointless and destructive jobs? Finance, management consultancy, advertising, public relations, lobbying: these and other useless occupations consume thousands of the brightest students. To take such jobs at graduation, as many will in the next few weeks, is to amputate life close to its base.

I watched it happen to my peers. People who had spent the preceding years laying out exultant visions of a better world, of the grand creative projects they planned, of adventure and discovery, were suddenly sucked into the mouths of corporations dangling money like angler fish. At first they said they would do it for a year or two, “until I pay off my debts.” Soon afterwards they added: “ … and my mortgage.” Then it became, “I just want to make enough not to worry anymore”. A few years later, “I’m doing it for my family”. Now, in middle age, they reply, “What, that? That was just a student fantasy.”

Why did they not escape, when they perceived that they were being dragged away from their dreams? I have come to see the obscene hours some new recruits must work – sometimes 15 or 16 a day – as a form of reorientation, of brainwashing. You are deprived of the time, sleep and energy you need to see past the place into which you have been plunged. You lose your bearings, your attachments to the world you inhabited before, and become immersed in the culture that surrounds you. Two years of this and many are lost for life.

Employment by the City has declined since the financial crash. Among the universities I surveyed with the excellent researcher John Sheil, the proportion of graduates taking jobs in finance and management consultancy ranges from 5% at Edinburgh to 13% at Oxford, 16% at Cambridge, 28% at the London School of Economics and 60% at the London Business School. But to judge by the number of applications and the rigour of the selection process, these businesses still harvest many of the smartest graduates.

Recruitment begins with lovebombing of the kind that cults use. They sponsor sports teams and debating societies, throw parties, offer meals and drinks, send handwritten letters, use student ambassadors to offer friendship and support. They persuade undergraduates that even if they don’t see themselves as consultants or bankers (few do), these jobs are stepping stones to the careers they really want. They make the initial application easy, and respond immediately and enthusiastically to signs of interest. They offer security and recognition when people are most uncertain and fearful about their future. And there’s the flash of the king’s shilling: the paid internships, the golden hellos, the promise of stupendous salaries within a couple of years. Entrapment is a refined science.

We have but one life. However much money we make, we cannot buy it back. As far as self-direction, autonomy and social utility are concerned, many of those who enter these industries and never re-emerge might as well have dropped dead at graduation. They lost it all with one false step, taken at a unique moment of freedom.

John Sheil and I sent questions to eight of the universities with the highest average graduate salaries: Oxford, Cambridge, Imperial, the LSE, the London Business School, Warwick, Sheffield and Edinburgh. We asked whether they seek to counter these lavish recruitment drives and defend students from the love blitz. With one remarkable exception, their responses ranged from feeble to dismal. Most offered no evidence of any prior interest in these questions. Where we expected deep deliberation to have taken place, we found instead an intellectual vacuum.

They cited their duty of impartiality, which, they believe, prevents them from seeking to influence students’ choices, and explained that there were plenty of other careers on offer. But they appear to have confused impartiality with passivity. Passivity in the face of unequal forces is anything but impartial. Impartiality demands an active attempt to create balance, to resist power, to tell the dark side of the celestial tale being pummelled into the minds of undergraduates by the richest City cults.

Oxford University asked us, “isn’t it preferable that [the City] recruits bright, critical thinkers and socially engaged graduates who are smart enough to hold their employers to account when possible?”. Oh blimey. This is a version of the most desperate excuse my college friends attempted: “I’ll reform them from within.” This magical thinking betrays a profound misconception about the nature and purpose of such employers. They respond to profit, the regulatory environment, the demands of shareholders, not to the consciences of their staff. We all know how they treat whistleblowers. Why should “bright, critical thinkers and socially engaged graduates” be despatched on this kamikaze mission? I believe these universities are failing in their duty of care.

The hero of this story is Gordon Chesterman, head of the careers service at Cambridge, and the only person we spoke to who appears to have given some thought to these questions. He told me his service tries to counter the influence of the richest employers. It sends out regular emails telling students “if you don’t want to become a banker, you’re not a failure”, and runs an event called “But I don’t want to work in the City”. It imposes a fee on rich recruiters and uses the money to pay the train fares of non-profits. He expressed anger about being forced by the government to provide data on graduate starting salaries. “I think it’s a very blunt and inappropriate means [of comparison], that rings alarm bells in my mind.”

Elsewhere, at this vulnerable, mutable, pivotal moment, undergraduates must rely on their own wavering resolve to resist peer pressure, the herd instinct, the allure of money, flattery, prestige and security.

Students, rebel against these soul-suckers! Follow your dreams, however hard it may be, however uncertain success might seem.

Published in the Guardian 3rd June 2015