Bill Nye is back with part two of his radio appearance, where he and co-host Chuck Nice delve even deeper into the Science Guy’s controversial flip-flop on genetically modified organisms (GMOs).

“People developed this herbicide called glyphosate that kills all the weeds, and kills all of everything except the plants that have this cool gene in them that allows them to grow right through it. We also killed the milkweed, and the milkweed is what the monarch butterflies rely on. So we accidentally have decimated the monarch butterfly population, reduced it over the last two decades by 90 percent … We don’t want that where you are accidentally wiping out a potential pollinator species.” 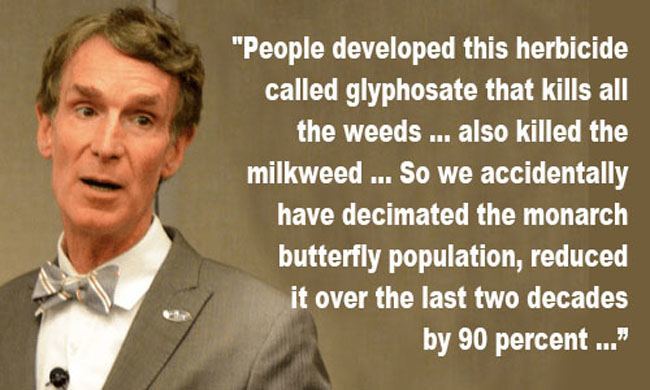 “This is the concern of certain organic farmers, that these seeds end up in their soil and they get contaminated. [But] if you’re not planting them on purpose, there’s just not that much contamination. And the infamous cases, where when people claim they got canola growing that flew into their fields accidentally and started growing, there’s substantial evidence that those cultivars were carefully cultivated. That is to say, one guy claimed that these seeds flew into his field, but they really didn’t—he really planted them.”

On the use of GM-seeds in other countries

On the use of genetically modified animals for scientific experimentations

“We do genetically modify animals—we’re talking about lab rats that glow in the dark, those little mice. These are very important to our research. These are very important to the way humans know our genes. On balance, I’m in favor of it, and I’m not a vegetarian and maybe one day soon I’ll become one. But I understand we raise animals to kill them and eat them routinely. By analogy we raise, especially mice, for laboratory studies that enable wonderful things. With that said I’m very sympathetic. There’s a line you draw. A rhesus monkey is very similar—and to me in many ways superior—to my old boss. So I understand when you don’t want to do experiments on that guy or gal …. I think it’s still very important for humankind to have access to so called ‘laboratory models’—that’s a noun they use to describe these rats and mice whose genes we have modified to understand our own genes.”

On the pros of genetically modified food

“The good side is, we get more yield per hectare or acre. In other words, we have less impactful farming. In other words, we affect the ecosystem less because we’ll produce more food on less land. We are using biology to fight pests and diseases rather than chemistry.”

On the cons of genetically modified food

“The one that everyone has observed is the monarch butterflies, where we have reduced their population 90 percent not as as consequence exactly of raising genetically modified food, but by using this extraordinary effective herbicide that has killed the milk flowers, or milkweeds, which nourish the monarchs …. Are there other insects that you infected accidentally by messing up their food source?”

Nye continued,  “And the other unintended consequence [is] monoculture farming. Enormous tracts of a single type of plant make it very hard for bees, as pollinators, to get the job done. They got to go there, do that one crop, then there’s nothing to do. And somebody puts them back in a box and puts them in a truck and takes them to a different crop, and they just get beaten up, they can’t handle it.”

“The unintended consequences are things like the monarch butterflies and this monoculture farming, which affects the pollinators and our whole agricultural system. So these are things that are avoidable. So it’s good and bad, but it’s manageable. I just think it’s a necessary consequence when you’re going to have 7.2 billion [people] become 9.2 billion you’re join to have to do something to feed them.”

On the public’s fear of corporations controlling our food supply

“Bear in mind farmers make choices … they can buy seeds from this guy or that guy. And like everything else … things have gotten consolidated because international commerce has made it more efficient. And I understand our fear of corporations, but nevertheless, that is manageable through—dare I say it—regulation, where you would make it so the marketplace is generally fair. This seems like a very solvable problem … I’m not worried about The Man taking over the world because farmers make choices, and producing seeds with certain characteristics is a very competitive business. [For instance,] RoundUp is a very famous brand, but there are dozens of companies, several of them are in Asia that manufacture a very similar glyphosate salt that is well-suited as an herbicide. It’s a competitive business.”

Nye added, “Farmers choose what seeds to plant based on the ones that perform the best, not based on gunpoint from a corporation.”

On the organic farming market and Whole Foods’ prices

“This is why the non-GMO movement has a place. We will see if that’s economically competitive. You can say corporations are squashing them. I don’t think so. You’ll find that organic farming takes more input than farming with genetically modified crops. So we’ll let the marketplace sort that out … They call it ‘Whole Paycheck’ because the food is so expensive, because it’s grown in small quantities with high input. So we’ll see what happens in the marketplace.”