Obama to Out Bomb Bush! 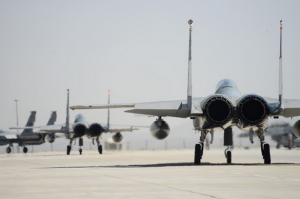 “U.S. Central Command’s latest figures on its aerial bombardment of Iraq and Syria reveal that this is the heaviest U.S. bombing campaign since President George W. Bush’s “Shock and Awe” campaign against Iraq in 2003. In the campaign’s first ten months from August 2014 to May 2015, the U.S. and its allies conducted 15,245 air strikes, or an average of 51 air strikes per day.

“This is only the latest campaign in a 15-year global air war, largely ignored by U.S. media, in which the United States and its allies have conducted at least 118,000 air strikes against other countries since 2000. The 47,000 air strikes conducted in the 6 ½ years since President Barack Obama took office are only a small reduction from the 70,000 in eight years of the Bush administration, and the current campaign will easily make up that deficit if it continues at this intensity until Obama leaves office…

“After 118,000 air strikes, millions of casualties, trillions of dollars squandered, and country after country plunged into chaos, the U.S. has failed to gain political control over any of them.

“But our complacent leaders and their self-satisfied advisers blunder on, debating who to threaten or attack next: Russia? China? Iran? Which “threat” provides the best pretext for further U.S. military expansion? U.S. war-making is not just dangerous and irrational. It is also a crime…”