Jul 25 2015 – U.S. President Barack Obama spoke in Nairobi at the end of a two-day visit Saturday, focusing on Kenya’s economy and the fight against terrorism, but also briefly touching on gay rights and discrimination. 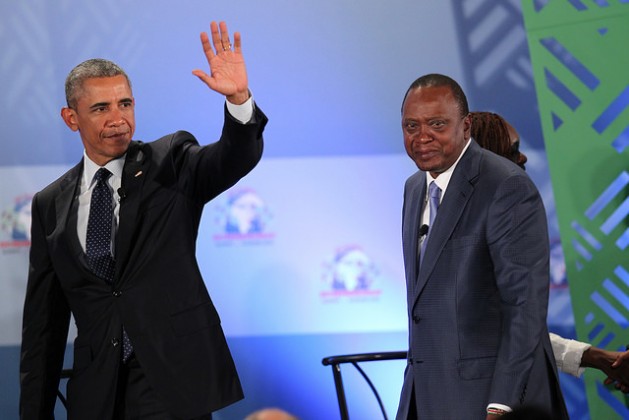 “When you start treating people differently not because of any harm they are doing to anybody, but because they are different, that’s the path whereby freedoms begin to erode, and bad things happen,” Obama said at a joint press conference with Kenyan President Uhuru Kenyatta.

But LGBTI [Lesbian, gay, bisexual, transgender and intersex] Kenyans are not in agreement about whether Obama’s presence will help or hurt their struggle, according to the Executive Director of the International Gay and Lesbian Human Rights Commission, Jessica Stern.

“The difference of views is a sign of the strength and diversity of the Kenyan LGBTI movement, but there’s no question that this is a potential minefield, and ultimately, those who stand to get hurt most are regular Kenyans,” she told IPS.

Some have argued that the U.S. president speaking out on LGBTQ human rights in Kenya was counterproductive in the past, and has made the people of Kenya, where same-sex relations are punishable by up to 14 years in prison, more homophobic and unsupportive of the LGBTQ community.

Anti-gay organisations like the Kenya Christian Professionals Forum claim that they gained more support due to President Obama’s comments in 2013, along with some American policies, likely because the protection of LGBTQ communities is widely viewed as an American value being imposed on African society.

After Obama’s comments Saturday, President Kenyatta stated that in Kenya, it is “very difficult to impose” gay rights because the culture is different from the United States, and the societies do not accept it – which makes it a “non-issue” to the government of Kenya.

“There’s been a deliberate attempt to portray homosexuality as a Western import, which it isn’t,” the U.N. adviser on human rights, sexual orientation and gender identity, Charles Radcliffe, told IPS. “The only Western imports in this context are the homophobic laws used to punish and silence gay people,” these laws mostly originating from 19th century British colonialism.

By speaking on LGBTQ human rights abuses, Obama is “imposing human values, not Western ones,” says Radcliffe. “It’s possible to respect tradition, while at the same time insisting that everyone — gay people included — deserve to be protected from prejudice, violence, and unfair punishment and discrimination.”

Radcliffe said he believes Obama and other leaders should speak out, as it will “open people’s eyes to the existence of gay Kenyans and the legitimacy of their claim to respect and recognition.”

Radcliffe advises prominent individuals to take their lead from members of the local LGBT community – who are best placed to advise on what interventions are likely to help, and which ones risk making things more difficult.

“LGBT activists are too often isolated in their own countries; they need the support of fellow human rights activists, women’s rights activists and others campaigning for social justice. Public opinion tends to change when individual members of the public get to know LGBT individuals and realise they are people too. The government should hasten that process, not obstruct it. ”

Radcliffe notes that “you can’t encourage change by staying silent.”

According to Stern, “LGBTI Kenyans have been fighting their own heroic struggle for years, but the extremists have seized upon this opportunity to undermine their credibility as Kenyans.  All Kenyans, gay and straight, lose when there’s this kind of media spin doctoring.”

Stern urged leaders like Obama and the media not to undermine an opportunity to address a spectrum of human rights abuses Kenyans are living with. Instead, she says there should be a focus on concerns which are being left by the wayside, such as the lack of police accountability, abuse by government security forces, abuse of Somali and Muslim communities, and a crackdown on NGOs, among many others.

“They’re defending people who’ve been arbitrarily arrested and charged, such as two men in Kwale County being tried under the ‘unnatural offenses law’. They’ve documented hundreds of extrajudicial killings by police in recent years, and they’ve called for police guilty of violence and theft to be disciplined and prosecuted.”

According to Human Rights Watch, Kenya continues to be plagued by corruption at all levels of government with limited accountability.

For example, although both presidents Kenyatta and Ruto campaigned for elected office on pledges to continue their cooperation with the International Criminal Court (ICC), which has charged both presidents with crimes against humanity in the past, their campaigns later painted the ICC as a tool of Western imperialism, and encouraged other African leaders to undermine the ICC.