With Pope Francis at the Helm, World’s Mayors Pledge to Fight Climate Change

‘His Holiness did not convene us here to ratify the status quo, but in fact to upend it,’ said New York City Mayor Bill de Blasio at Vatican conference. 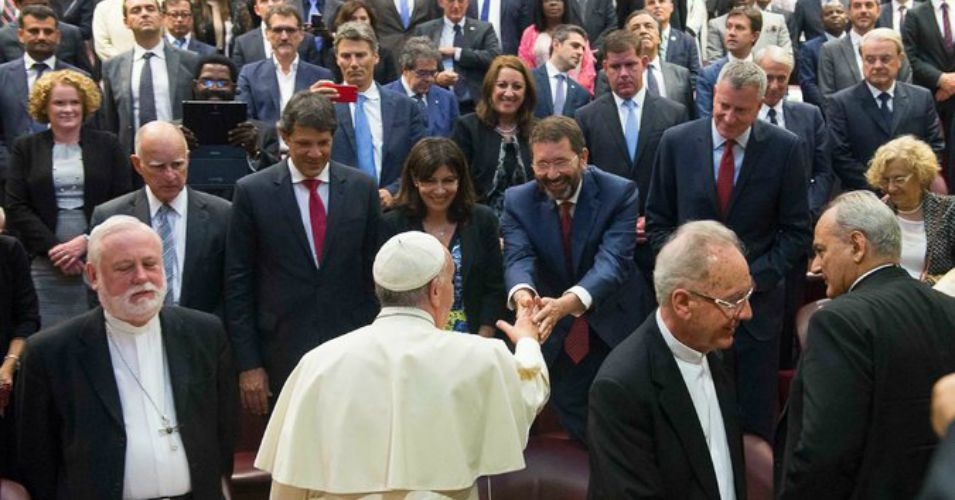 Pope Francis greets Mayor Ignazio Marino of Rome at the Vatican on Tuesday. To the right of Marino is Mayor Bill de Blasio of New York City, while three to the left of him is California Governor Jerry Brown. (Photo: L’Osservatore Romano/AP)

At the Vatican on Tuesday [21 Jul 2015], mayors from around the globe pledged to fight climate change and help the world’s poor deal with the effects of a warming planet, an oath that came during a two-day conference with Pope Francis—himself a dedicated climate activist.

About 60 mayors pledged, one by one, to reduce their cities’ emissions and urge global leaders to pass a “bold climate agreement” at the upcoming United Nations talks in Paris that “confines global warming to a limit safe for humanity, while protecting the poor and the vulnerable from ongoing climate change that gravely endangers their lives.”

The event, which also focused on combating modern-day slavery, was organized shortly after the publication of Pope Francis’s unprecedented environmental encyclical. It marked the first time that the Vatican had invited local leaders to meet with the pope, an effort that sought to fuel local grassroots movements calling for an aggressive fight against climate change to emerge at the Paris talks in December.

“We can’t say that the person is here, and the care for the environment is there,” Francis said on Tuesday as he took the stage to address the mayors. “This is what I was trying to express in the encyclical “Laudato Si’.” We can’t separate man from all else. There is a mutual impact.”

“It’s not a green encyclical; it’s a social encyclical,” he continued.

His call was heralded by those in attendance. “There is a vivid recognition that mayors are key players in changing how policies that have before now been spoken about across nations are actually applied on the streets of the cities,” New Orleans Mayor Mitch Landrieu told Catholic News Service. “Mayors are actually responsible for getting things done.”

And New York City Mayor Bill de Blasio gave a speech at the conference, stating, “It’s increasingly clear that we local leaders of the world have many tools and that we must use them boldly even as our national governments hesitate.”

Mayor Yelgi Verley Knight of Siquirres, Costa Rica, told CNS that she is disappointed to see so few women on the Vatican’s list of speakers, especially because women are the first victims of human trafficking and the poverty caused by climate change.

“We as women mayors have to speak for those who have no voice. Slavery isn’t something of yesterday. I am of African descent; my ancestors came to the Caribbean as slaves, a situation that was driven by the economic system, which is the same thing that is happening today.”

Tony Chammany, mayor of Kochi, a city on India’s western coast, tied these ideas together with examples from his country. Rising seas are “going to pose a big threat to the very survival” of Kochi, he said. Meanwhile, as India experiences increasingly severe weather, many of the country’s poor farmers will leave their land. Some of their families will be “pushed into the dark dungeons of slavery,” Chammany said. India’s poor, he emphasized, will be hit particularly hard by a problem they did little to create.

And the New York Times reports:

Francis told the audience he was worried about the uncontrolled growth of poverty belts around expanding cities with no care for the environment, and the ensuing suffering for those who inhabit the areas.

He also expressed his concern about the “rebound effect” for human beings of the deforestation of the Amazon in Brazil, and for how the trafficking of people, forced labor and prostitution thrive in poor areas. And he urged the mayors sitting in front of him to pay increasing attention to the problem of environmental destruction.

The mayors had, in fact, taken their task very seriously.

“His Holiness did not convene us here to ratify the status quo, but in fact to upend it,” Bill de Blasio, mayor of New York, said in his 10-minute speech. “It’s increasingly clear that we, the local leaders of the world, have many tools, more than we may have in fact realized, and we must use them boldly even as our national governments hesitate.”

Francis has previously slammed “unbridled capitalism” as a destructive force and explicitly connected climate change to global poverty and inequality, saying that addressing global warming is “an ethical and moral imperative.”

On Tuesday, he had an optimistic outlook on the COP21 conference.

“I have a great hopes in the Paris summit,” he said. “I have great hopes that a fundamental agreement is reached. The United Nations needs to take a very strong stand on this.”