16 Sep 2015 – Charlie Hebdo, the French so-called comic magazine that creates art for the sole purpose of being offensive has released one of its most controversial and insulting images yet, and this time many people are saying they have gone too far. 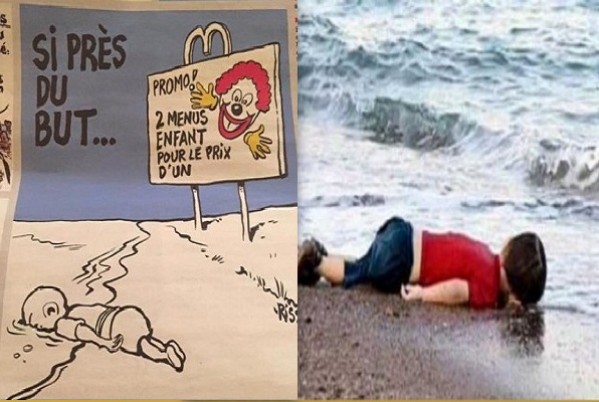 The image is accompanied by the message: “Welcome to the migrants… so close to the goal”, with a McDonalds billboard that said “Promotional offer: kids menu 2 for the price of 1.”

Hebdo is known for its insensitive anti-Muslim work and has been celebrated by some as a fighter for free speech, specifically due to the fact that it intentionally crosses the line with every comic released. However, now even some of its strongest supporters are now disgusted with the newest release, which actually mocks Aylan Kurdi, the Syrian child who was photographed after he had drowned and washed up on a beach last week.

Hebdo commissioned Laurent “Riss” Sourisseau as the artist for the comic, the controversial artist responsible for the pictures earlier this year that sparked terrorist attacks in France. Also released with the gruesome image of the young Syrian child on the beach, was one of Jesus walking on water next to the boy while he was drowning. 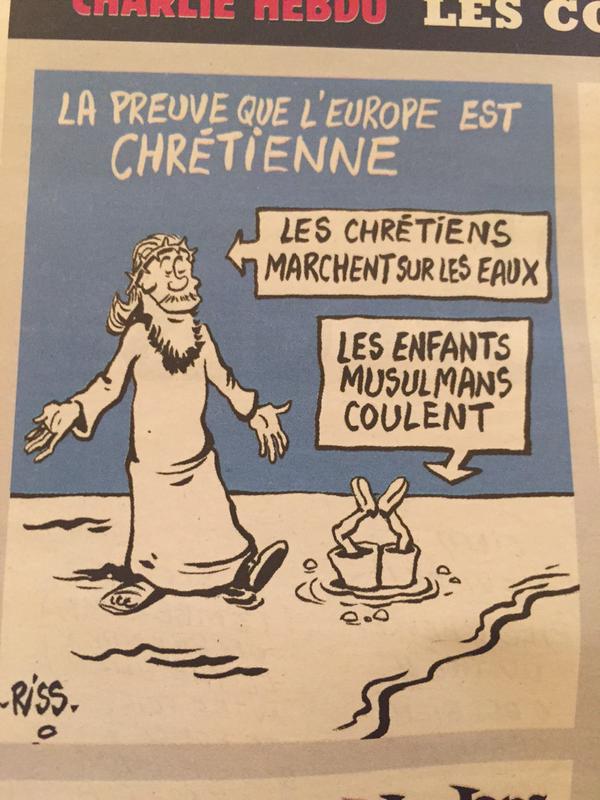 This photo had the horrific message: “Proof that Europe is Christian – Christians walk on water – Muslim kids drown.”

This piece may finally be the straw that broke the camel’s back, and may lose the support of the misguided followers that Hebdo still has. Sure, it does have the right to free speech, and can print whatever they want. However, that does not mean that people actually have to support it and its racist and xenophobic artwork. If they have the freedom to put out work like this, then other people have the right to openly reject it.

John Vibes is an author, researcher and investigative journalist who takes a special interest in the counter culture and the drug war.