I am not ashamed to admit it. I am afraid.

I am afraid of the Islamic State movement, alias ISIS, alias Daesh.

Those who treat it today with equanimity, with indifference, will come to regret it.

IN THE year I was born – 1923 – a ridiculous little demagogue with a funny mustache, Adolf Hitler, staged an attempted putsch in Munich. It was put down by a handful of policemen and soon forgotten.

The world had far more serious dangers to contend with. There was the galloping inflation in Germany. There was the young Soviet Union. There was the dangerous competition between the two mighty colonial powers, Great Britain and France. There was, in 1929, the terrible economic crisis that devastated the world economy.

But the little Munich demagogue had a weapon that did not catch the eye of experienced statesmen and wily politicians: a powerful state of mind. He turned the humiliation of a great nation into a weapon more effective than aircraft and battleships. In a short time – just a few years – he conquered Germany, then Europe and looked set to take on the entire world.

Many millions of human beings perished in the process. Untold misery visited many countries. Not to mention the Holocaust, a crime almost without parallel in the annals of modern history. 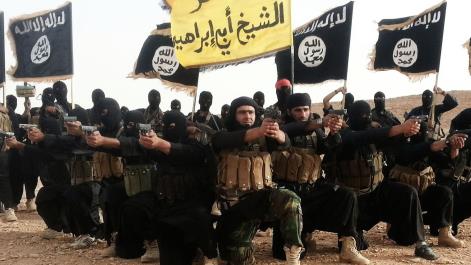 How did he do it? Primarily not by political and military power, but by the power of an idea, a state of mind, a mental explosion.

I witnessed this in the first quarter of my life. It springs to my mind when I look at the movement that now calls itself IS, the Islamic State.

IN THE early 7th century of the Christian era, a small merchant in the godforsaken Arab desert had an idea. In an amazingly short period of time he and his companions conquered his home town, Mecca, then the entire Arabian peninsula, then the Fertile Crescent, and then most of the civilized world, from the Atlantic ocean to North India and much beyond. His followers reached the heart of France and laid siege to Vienna.

How did a little Arab tribe achieve all this? Not by military superiority but by the force of an intoxicating new religion, a religion so progressive and liberating that its earthly power could not be resisted.

Against an intoxicating new idea, material weapons are powerless, armies and navies crumble and mighty empires, like Byzantium and Persia, disintegrate. But ideas are invisible, realists cannot see them, experienced statesmen and mighty generals are blind to them.

“How many divisions has the Pope?” Stalin responded contemptuously, when told about the power of the Church. Yet the Soviet Empire fell and disappeared, and the Catholic Church is still here.

AL-DAULA AL-ISLAMIYAH, the Islamic State, is a “fundamentalist” movement. The fundament is the Islamic state founded 1400 years ago by the Prophet Muhammad in Medina and Mecca. This backward-looking stance is a propaganda ploy. How can anyone resurrect something that existed so many centuries ago?

In reality, IS is an extremely modern movement, a movement of today and probably of tomorrow. It uses the most up-to-date instruments, like the internet. It is a revolutionary movement, probably the most revolutionary in today’s world.

In its rise to power, it uses barbaric methods from bygone times to achieve very modern aims. It creates terror. Not the propaganda term “terrorism” used nowadays by all governments to stigmatize their enemies. But actual atrocities, abominable deeds, chopping off heads, destroying invaluable antiquities – all to strike debilitating fear into the hearts of its enemies.

The IS movement does not really care about Europe, the US and Israel. Not for now. It uses them as propaganda fuel to achieve its real immediate aim: to take hold of the entire Islamic world.

If it succeeds in this, one can imagine the next step. After the Crusaders conquered Palestine and the surrounding areas, a Kurdish adventurer called Salah-a-Din al-Ayyubi (Saladin to European ears) set out to unite the Arab world under his leadership. Only after succeeding in this, did he turn on the Crusaders and wipe them out.

Saladin, of course, was no IS-style merchant of atrocities. He was a profoundly humane ruler, and as such he was feted in European literature (see: Walter Scott). But his strategy is familiar to every Muslim, including the leaders of today’s Islamic “Caliphate”: first unite the Arabs, only then turn on the infidels.

FOR THE last two hundred years, the Arab world has been humiliated and oppressed. The humiliation, even more than the oppression, has been seared into the soul of every Arab boy and girl. Once the whole world admired Arab civilization and Arab science. During the European Dark Ages, barbaric Westerners were dazzled by Islamic culture.

No young Arab can abstain from comparing the splendor of the past Caliphate to the squalor of contemporary Arab reality – the poverty, the backwardness, the political impotence. Formerly backward countries like Japan and China have risen again and become world powers, beating the West at its own game, but the Arab giant remains impotent, attracting the world’s contempt. Even a tiny band of Jews (Jews of all people!) beat the Arab countries.

A huge reservoir of resentment has been building up in the Arab world, unseen and unnoticed by the Western powers that be.

In such a situation, there are two ways out. One is the arduous path: to divorce the past and build a modern state. That was the way of Mustapha Kemal, the Turkish general who banned tradition and created a new Turkish nation. It was a profound revolution, perhaps the most effective of the 20th century, and it earned him the title of Ataturk, Father of the Turks.

In the Arab world, there was an attempt to create a pan-Arab nationalism, a feeble imitation of the Western original. Gamal Abd-al-Nasser tried and was easily put down by Israel.

The other way is to idealize the past and claim to revive it. That is the way of IS, and it is hugely successful. With little effort it has taken hold of large parts of Syria and Iraq, wiping out the official borders created by Western imperialists. Imitators have set up proxies all over the Muslim world and attracted many thousands of potential fighters from the Muslim ghettos in the West and the East.

Now the Islamic State is starting on its march to victory. There seems to be no one to stop it.

FIRST OF all, because nobody seems to realize the danger. To fight an idea? To hell with ideas. Ideas are for intellectuals and such. Real statesmen look at facts. How many divisions has IS?

Second, there are other dangers around. The Iranian bomb. The Syrian chaos. The breakup of Libya. The oil prizes. And now the avalanche of refugees, mainly from the Muslim world.

Like a giant toddler, the USA is helpless. It supports an imaginary secular Syrian opposition, which exists only in American universities. It fights against the main enemy of IS, the Assad regime. It supports the Turkish leader who fights against the Kurds who fight against IS. It bombs IS from the air, risking nothing and achieving nothing. No boots on the ground, God forbid.

To govern is to choose, Pierre Mendes-France once said. In the present Arab world, the choice is between bad, worse and worst. In the fight against the worst, the bad is an ally.

Let’s put it bluntly: to try to stop IS means supporting the Assad regime. Bashar al-Assad is an abominable fellow, but he has kept Syria together, protected its many minorities and kept the Israeli border quiet. Compared to IS, he is an ally. So is Iran, a stable regime with a political tradition reaching back thousands of years – contrary to Saudi Arabia, Qatar et al which support IS.

Our own Bibi is as innocent of any understanding as a new-born child. He is shrewd, shallow and ignorant. His Iranian obsession blinds him to the new realities.

Fascinated by the wolf in front of him, Bibi is oblivious to the frightful tiger creeping up behind him.

Uri Avnery is a member of the TRANSCEND Network for Peace, Development and Environment. He is an Israeli journalist, writer, peace activist, a former Knesset member, and the founder of Gush Shalom.

2 Responses to “The Real Menace”