“War Is a Racket”

President Obama has been responsible for the largest U.S. military budget since the Second World War. This is documented in the U.S. Department of Defense’s annual “Green Book.”   The U.S. military receives more funding than the rest of the 10 largest militaries in the world combined (China, Saudi Arabia, Russia, U.K., France, Japan, India, Germany & South Korea).  For more details see http://warisacrime.org/content/record-us-military-budget

These figures do not include additional military-related spending by the VA, CIA, Homeland Security, Energy, Justice or State Departments, nor interest payments on past military spending, which combine to raise the true cost of U.S. militarism to about $1.3 trillion per year, or one thirteenth of the U.S. economy.

In addition, over the next 10 years the U.S. is planning to spend up to a TRILLION DOLLARS (1,000 Billion dollars) to modernize its nuclear weapons arsenal that can already destroy the world many times over.. 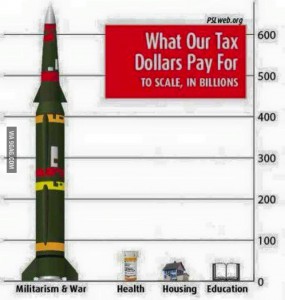 Most people are unaware of a rapidly expanding part of the U.S. Empire called military “Special Operations.” These secret forces now number 70,000 and are deployed in an astounding 135 countries around the world. For more details see https://www.transcend.org/tms/2015/09/u-s-special-ops-forces-deployed-in-135-nations/

“It always has been. It is possibly the oldest, easily the most profitable, surely the most vicious… It is the only one in which the profits are reckoned in dollars and the losses in lives. A racket is best described, I believe, as something that is not what it seems to the majority of the people. Only a small ‘inside’ group knows what it is about. It is conducted for the benefit of the very few, at the expense of the very many. Out of war a few people make huge fortunes.”