9 Nov 2015 – Opponents of genetically modified organisms (GMOs) have claimed victory after Mexico’s Supreme Court blocked last week a move that would allow the cultivation of GMO soy in the Mexican states of Campeche and Yucatan. In a separate appeals court decision, a federal judge upheld a 2013 ruling that barred companies such as Monsanto and DuPont/Pioneer from planting or selling their GMO corn within the country’s borders. 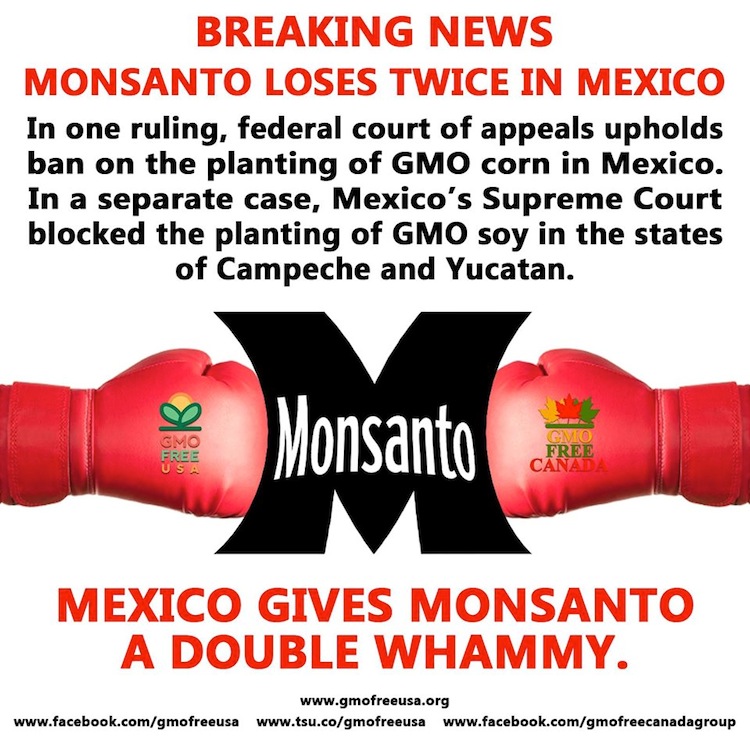 The court decisions were heralded as a “double whammy” against agribusiness giant Monsanto, according to a celebratory Facebook post from sustainable food advocacy organization GMO Free USA.

According to a report from Mexico News Daily, the ruling on Wednesday [4 Nov] favored an injunction filed by Maya beekeepers on the Yucatán peninsula, where honey production and collection is its main industry.

“The decision suspends a permit granted to the agrichemical firm Monsanto to farm genetically modified soybeans on over 250,000 hectares in the region and instructs a federal agency it must first consult with indigenous communities before granting any future permits for transgenic soy farming,” the report said.

Environmental organizations such as Greenpeace, Indignación and Litiga OLE reportedly said that farming GMO soybeans in the region would put honey production and approximately 15,000 Maya farm families at risk due to the use of the herbicide glyphosate (which has been linked to cancer). It was also claimed that soy production would lead to deforestation in Campeche.

Monsanto has since given a response to the decision, denying that its GMO soy has impacted bees, causes deforestation or damages the honey industry in the two states, Reuters reported.

“We do not accept accusations that put us as responsible for deforestation and illegal logging in the municipality of Hopelchén, Campeche, or any place of the Republic, because our work is rigidly attached to the guidelines provided by law,” the company said in a statement.

As for GMO corn, Sustainable Pulse reported that federal judge Benjamin Soto Sánchez, head of the second Unitarian Court in Civil and Administrative Matters of the First Circuit, “upheld a provisional suspension prohibiting pertinent federal agencies from processing and granting the privilege of sowing or releasing into the environment of transgenic maize in the country.”

This decision came despite 100 challenges by transnational agribusiness interests and the federal government, according to Sustainable Pulse.

According to Al Jazeera, “Fewer than 30 percent of Mexican farmers even use conventional hybrid maize—high-yielding, single-use seeds, which need to be purchased every year,” and prefer “to stick with seeds they can save year to year, often varieties of the native ‘landraces’ of maize the injunction is intended to protect.” Still, Monsanto “has the Mexican market for yellow maize seeds; 90 percent of U.S. maize is in GM seeds, and that is the source for Mexico’s imports of yellow maize.”

Mexico’s initial ban of GMO corn in September 2013 was overturned in August 2015, which opened the door for more business opportunities for Monsanto pending favorable later court decisions, as Telesurtv noted. The multinational company announced that it was seeking to double its sales in the country over the next five years.

However, this latest ruling from the appellate court could drive Monsanto’s ambitions to the ground.

A staunch anti-GMO movement has swelled in the country in order to preserve the country’s unique biodiversity of its staple crop. Lawyer Bernardo Bátiz, advisor to the lead plaintiffs’ organization, Demanda Colectiva, spoke about the significance of the two separate cases.

He said that Mexico is “a country of great biological, cultural, agricultural diversity and [therefore the courts should consider the impact of] planting GMO corn, soybeans or other crops.”

He added, “in a country like ours, among other negative effects that would result, is that Mexican honey would be difficult to keep organic.”

Is GMO Pork the Future of Our Food?