3 Nov 2015 – The Environmental Protection Agency concluded in June that there was “no convincing evidence” that glyphosate, the most widely used herbicide in the U.S. and the world, is an endocrine disruptor. 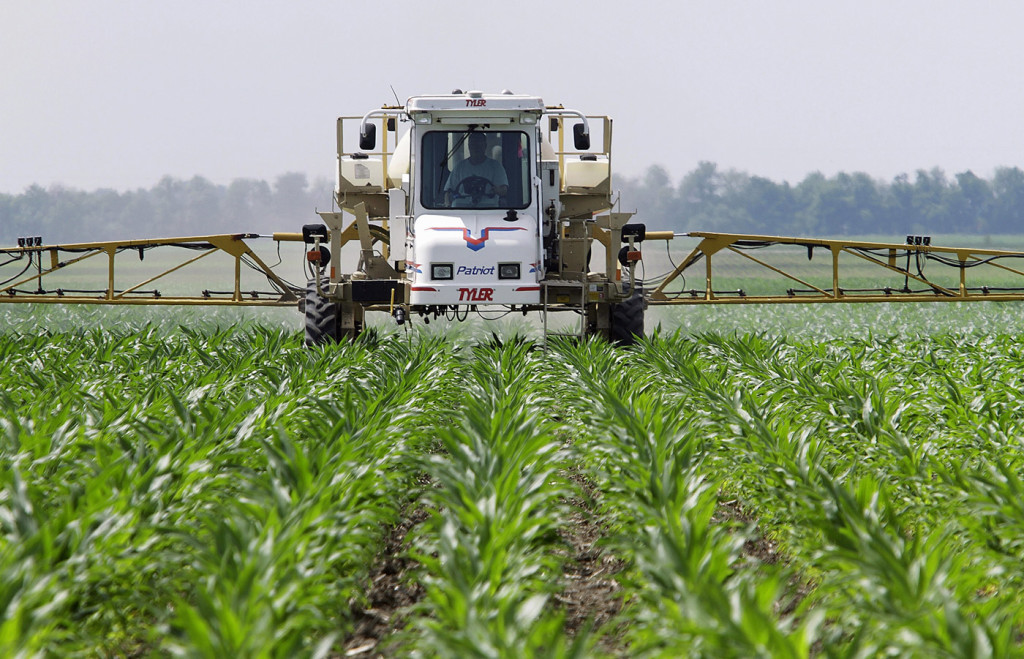 On the face of it, this was great news, given that some 300 million pounds of the chemical were used on U.S. crops in 2012, the most recent year measured, and endocrine disruption has been linked to a range of serious health effects, including cancer, infertility, and diabetes. Monsanto, which sells glyphosate under the name Roundup, certainly felt good about it. “I was happy to see that the safety profile of one of our products was upheld by an independent regulatory agency,” wrote Steve Levine on Monsanto’s blog.

But the EPA’s exoneration — which means that the agency will not require additional tests of the chemical’s effects on the hormonal system — is undercut by the fact that the decision was based almost entirely on pesticide industry studies. Only five independently funded studies were considered in the review of whether glyphosate interferes with the endocrine system. Twenty-seven out of 32 studies that looked at glyphosate’s effect on hormones and were cited in the June review — most of which are not publicly available and were obtained by The Intercept through a Freedom of Information Act request — were either conducted or funded by industry. Most of the studies were sponsored by Monsanto or an industry group called the Joint Glyphosate Task Force. One study was by Syngenta, which sells its own glyphosate-containing herbicide, Touchdown.

Findings of Harm Were Dismissed

Who pays for studies matters, according to The Intercept’s review of the evidence used in the EPA’s decision. Of the small minority of independently funded studies that the agency considered in determining whether the chemical poses a danger to the endocrine system, three of five found that it did. One, for instance, found that exposure to glyphosate-Roundup “may induce significant adverse effects on the reproductive system of male Wistar rats at puberty and during adulthood.” Another concluded that “low and environmentally relevant concentrations of glyphosate possessed estrogenic activity.” And a review of the literature turns up many more peer-reviewed studies finding glyphosate can interfere with hormones, affecting such things as hormonal activity in human liver cells, functioning of rat sperm, and the sex ratio of exposed tadpoles.

Yet, of the 27 industry studies, none concluded that glyphosate caused harm. Only one admitted that the pesticide might have had a role in causing the health problems observed in lab animals exposed to it. Some rats that consumed it were more likely to have to have soft stools, reduced body weight, and smaller litters. But because that evidence didn’t meet a test of statistical significance, the authors of the Monsanto study deemed it “equivocal.”

Indeed, many of the industry-funded studies contained data that suggested that exposure to glyphosate had serious effects, including a decrease in the number of viable fetuses and fetal body weight in rats; inflammation of hormone-producing cells in the pancreas of rats; and increases in the number of pancreatic cancers in rats. Each is an endocrine-related outcome. Yet in each case, sometimes even after animals died, the scientists found reasons to discount the findings — or to simply dismiss them.

While recent research has shown that very low doses of endocrine disruptors can not only have health effects but effects that are more dramatic than those caused by higher doses, some of the studies dismiss clear examples of harm because they occur in animals given relatively low doses of the substance. A study prepared by Monsanto in 1990, for instance, noted a statistically significant increase in pancreatic cancers among rats exposed to a relatively low dose of Roundup. The rats had a 14 percent chance of cancer, compared to a 2 percent chance in the control group. But since some rats exposed to higher amounts of the chemical had lower cancer rates, the scientists concluded the elevation was “unrelated to glyphosate administration.”

Independent scientists may come up with different results than industry-funded ones for a variety of reasons, including how a study is designed or carried out. But Michelle Boone, a biologist who served on an EPA panel that evaluated the safety of atrazine, another pesticide, told The Intercept that analysis of those results is an area particularly ripe for bias. “Once you have industry intimately involved in interpreting the data and how it’s written up, it’s problematic.”

Having companies fund and perform studies that affect them financially would seem to be an obvious conflict of interest, but that’s the standard practice at EPA. The glyphosate review, which was completed in June, was one of 52 reporting on the endocrine disrupting potential of pesticides, all of which relied heavily on industry-funded research and most of which concluded, as the one of glyphosate did, that there was no cause for further testing. (Though marketed as a weed killer, or herbicide, glyphosate is considered to be a pesticide by the EPA.)

Asking chemical companies to do their own testing makes financial — if not scientific — sense for the cash-strapped federal agency. Monsanto, which had more than $15.8 billion in net sales last year (roughly twice the EPA’s annual budget), can easily foot the research bill. Companies like Monsanto, Syngenta, or Dow can either do the research themselves or hire contract research labs, such as Wildlife International or CeeTox, Inc., which supplied much of the research for the glyphosate review.

But the fact that these labs depend upon the large corporations that employ them as evaluators can’t help but skew their findings, according to critics of the system. “They know who’s buttering their toast,” said Doug Gurian Sherman, a senior scientist at the Center for Food Safety and former staff scientist at the EPA Office of Pesticide Programs. “It’s not that people are going to necessarily do something clearly fraudulent. It’s more that it puts a pressure to shave things in a direction to whoever’s paying the bills.”

The process can be distorted beginning with the very first step, when a company chooses which lab will perform its tests. “Industry is very aware of companies they can hire that have never found an estrogen positive chemical,” said Laura Vandenberg, a professor of biology at University of Massachusetts, Amherst, who specializes in endocrine disruption and hazard assessment. “Just like you know which mechanic in your neighborhood is more likely to be dishonest. They know who is more likely to give them a favorable finding.”

The EPA defended its process in a statement. “We want to make clear that EPA maintains a transparent, public process for assessing potential risks to human health when evaluating pesticide products,” it began. The agency statement also pointed out that the law requires pesticide companies to provide studies supporting their products. “Once studies are submitted to the agency, EPA scientists analyze the data to ensure that the design of the study is appropriate and that the data have been collected and analyzed accurately.”

Syngenta responded in a statement that pointed out that pesticide companies have to provide data to the EPA: “The law requires manufacturers do extensive scientific studies to prove a new compound is safe. EPA controls and documents the studies’ strict adherence to its guidelines. This provides the highest level of transparency to the agency, fellow scientists and the public.”

A spokesperson for Monsanto wrote in an email that “the government requires many, many studies to make sure herbicides can be used safely. While some of these studies are required to come from us, many of these studies are conducted by third-party scientists and labs. The EPA looked at 11 different validated assays assessing the potential for effect of glyphosate on endocrine pathways in humans and wildlife. Based on its review of the data, EPA concluded ‘there was no convincing evidence of potential interaction with the estrogen, androgen or thyroid pathways’ and this conclusion is consistent with the results from other safety studies conducted in accordance with international and assessment guidelines.” Dow, Wildlife International, and CeeTox, Inc. did not respond to The Intercept’s requests for comment.

A False Sense of Security

The dependence on industry is just one of several limitations of the EPA’s effort to screen pesticides for their potential to interfere with the way androgen, estrogen, and thyroid hormones work. The effort has also been dogged by delays. Congress mandated that the agency begin screening to see whether pesticides were endocrine disruptors back in 1996. Yet the screenings of the 52 pesticides in June were the first to emerge from the program in almost 20 years since the testing was required.

In the intervening time, our knowledge about endocrine disruptors has exploded, leaving many of the tests on them out of date. Indeed, many of the studies submitted for the glyphosate review dated back to the 1970s. One was 40 years old. In all, 15 of the 27 industry studies predated the term “endocrine disruption,” which was coined in 1991.

Perhaps the most important discovery in the area of endocrine research in the decades since those studies were performed is that even small amounts of hormonally active chemicals can have powerful effects. Yet the cutoffs used in the EPA’s screening program were far higher than the lowest levels shown to have effects in the latest research.

“We see effects at levels that are 1,000 times lower” than the cutoff EPA uses, said Vandenberg, who warned of the false sense of security given by such insensitive screenings. “It’s like putting your deaf grandfather in front of a TV and asking him if he can hear it and when he says no, you conclude the TV is off.”

Almost as problematic as the industry-provided data, some critics say, is the research the agency doesn’t consider. “They exclude studies that others in the field would consider to be perfectly good,” said Sherman, of the Center for Food Safety. Or, as was the case in the glyphosate review, findings of harm by independently conducted studies may be considered but discounted.

While independent scientists have complained about the role of the pesticide industry in its own regulation for years — and suggested ways to fix it, including discounting any studies that have a conflict of interest — there’s little progress on that front.

In fact, having cleared this review, glyphosate is now about to face another regulatory hurdle that, while bigger, is similarly flawed. Every 15 years, the EPA must review pesticides on the market in light of the latest science. Glyphosate’s review, which will include research on its health effects on humans and is expected to be completed in the next few months, is the first to come after the International Agency for Research on Cancer labeled glyphosate a probable carcinogen in March. If the EPA doesn’t reregister glyphosate, it could be essentially banned, as it already is in France and Sri Lanka.

Monsanto seems optimistic its product will survive the coming EPA review, noting in the blog post about the recent EPA review that “glyphosate’s safety is supported by one of the most extensive worldwide human health databases ever compiled on an agricultural product.”

Unfortunately, Monsanto has supplied most of that data.