What Has America Become? Inside the U.S. Assassination Complex

We could go on-and-on: $trillions spent on endless wars and militarism, a national security surveillance state that has bombed and conducted drone and Special Ops assassinations (even of American citizens) in 7 [or is it 8, 10, or 12 countries?] in the last 15 years. In addition, the U.S. plans to spend another trillion dollars to modernize its nuclear weapons over the next 3 decades.

A must read new book: The Assassination Complex: Inside the Government’s Secret Drone Warfare Program by Jeremy Scahill and the staff of The Intercept, with a foreword by Edward Snowden and afterword by Glenn Greenwald, published by Simon & Schuster.   In short, it is a book about what America has become – not hope and change, but unrestrained power.

[Excerpts from the book here: Whistleblowing Is Not Just Leaking — It’s an Act of Political Resistance, by Edward Snowden]

It has become increasingly clear that the U.S. is not about the business of “freedom and democracy” but rather global domination that benefits an economic corporate elite at the expense of nearly everyone else and the earth itself. Of course, the domination is disguised and fueled by fear: war on terror, regime change, destroying Al Qaeda, ISIS, etc. but increasingly the world is seeing through the disguise.

So what are we to do? It is an illusion and a fraud to say we can bring real change and put an end to U.S. imperial wars through electoral politics controlled by the very people and money system of empire. The solution is not a Trump, Hillary or even a Bernie Sanders.

Any hope for real change must begin at a much deeper level.  In the midst of empire, the task before us is to build communities, people’s movements, and take action of non-violent resistance for justice, peace, and the earth.  Do it because it is the right thing to do and it needs to be done.  Then, keep standing and keep acting.  It will not be easy but never give up!  As the late Father Dan Berrigan said,  ”There is no peace because there are no peacemakers. There are no makers of peace because the making of peace is at least as costly as the making of war.”

The real question is – Are we willing to pay the price? To stop the violence, to stop the killing, the buck stops here! 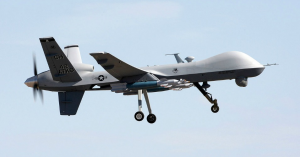 One Response to “A Killing Nation!”