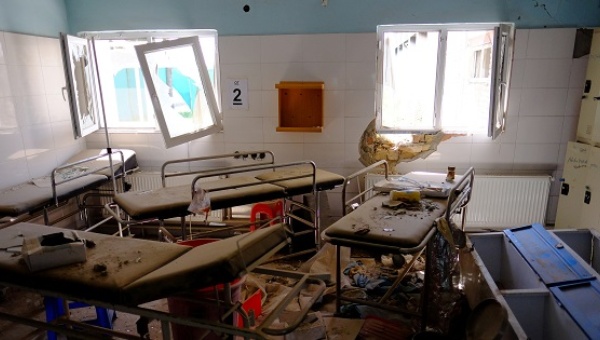 Hospital beds lay in the Doctors Without Borders hospital in Kunduz, Afghanistan, April 26, 2016, about six months after an American airstrike killed dozens of patients. | Photo: Reuters

10 May 2016 – Doctors Without Borders on Thursday [5 May] pulled out of a U.N.-sponsored World Humanitarian Summit in Istanbul on May 23-24 saying there was no hope that the meeting would address the weaknesses in humanitarian action and emergency response, particularly in conflict areas or epidemic situations, while claiming 75 of their hospitals were bombed in 2015.

The organization, better known by their French acronym MSF, believes that during the summit will not hold states involved in conflicts accountable or pressure them to abide by humanitarian norms.

“We no longer have any hope that the World Humanitarian Summit will address the weaknesses in humanitarian action and emergency response, particularly in conflict areas or epidemic situations,” MSD said in a statement.

“As shocking violations of international humanitarian law and refugee rights continue on a daily basis … participants will be pressed to a consensus on nonspecific, good intentions to ‘uphold norms’ and ‘end needs’,” Sandrine Tiller, an advisor for the organization said that U.N. organizers of the summit had “let states off the hook” by asking only that they make non-binding commitments, putting them on the same level as less powerful non-governmental organizations and United Nations agencies.

“The summit has become a fig-leaf of good intentions, allowing these systematic violations, by states above all, to be ignored,” the MSF explained.

The announcement comes after Doctors Without Borders on Tuesday slammed five permanent members of the United Nations Security Council for ties to attacks on hospitals in Syria, Yemen and Afghanistan.

The attack on the Syrian hospital killed at least 50 people according to a statement by the organization. They also claim that 75 hospitals managed or supported by Doctors Without Borders were bombed in 2015.