Thoughts on Silence – on Buddha’s Anniversary

21 May 2016 – When I recently read that we are silent most of the time and do not talk enough, I felt surprised. The author seemed to suggest that we do not protest at some injustice or wrongdoing but keep a silent facade. Sometimes between the wife and husband there is not enough conversation that results in unhappiness and even suspicion. In such situations, conversation and words are needed.

However ordinarily we talk too much – whether in the market place or on TV sets or at our place of work. Then there is the mobile phone, which is an instrument where we not only converse but occasionally shout because of the poor signal that is being received by the handset.

But here I want to talk of silence as a positive action – not by remaining silent at some injustice but as a positive value which can and does lead to peace and goodwill.

By silence one means that there is no sound or voice or any other disturbance.  One can hear one’s own breath while we breathe in or exhale. This also allows us to look inwards – to meditate, to not think of any sundry everyday task or chore that we perforce have to perform or complete by a certain date. When we meditate, we may sometimes think of the meaning of beauty or goodness or life in general or values or emotions. We may even try to recall the joy of watching a baby’s pranks and laughter or even its cries when it is hungry or wet. The joy is shared not only by its mother but any sensitive person standing nearby. 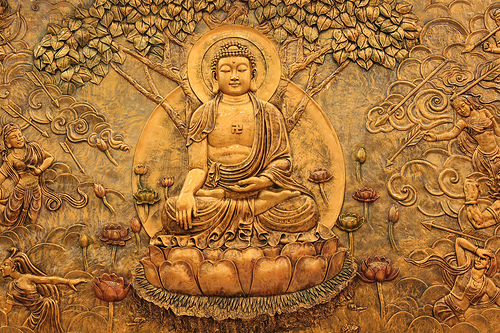 What we may think of depends on our frame of mind and our nature and on our spiritual or philosophical inclination. In silence we feel free and liberated. In the words of Lao Tzu, the ancient Chinese mystic and philosopher, silence is a source of great strength.

When there is complete silence, an unexpected voice or music gives us immense joy and peace. I can remember my stay some years ago in a quiet remote guesthouse atop a hill in our neighbouring country Bhutan. The country has a small population and few visitors and even during the daytime, it is usually quiet and peaceful. But in that distant guesthouse that night there was absolute silence – peaceful, joyful and soothing.

Suddenly I heard a faint ringing of bells which became somewhat louder a few moments later. Looking outside the window, I saw a remarkable sight that was producing those musical notes – a few cows with bells on their necks walking gently past the guesthouse on the road below. An unforgettable, enchanting son et lumiere. Could we have enjoyed this musical refrain if there was not complete silence that night?

Modern life with its problems and complexities makes us worry and become agitated. In that frame of mind, we generally may take a wrong step that would further enhance our worries. Even while speaking to one’s friends we may sometimes utter a few wrong words and the friendship may change to something unpleasant. We would then repent later at having uttered those foolish words and losing our friendship. In the words of another Chinese philosopher Confucius, Silence is a true friend who never betrays.

Become silent and let your mind rest and you can acquire peace of mind and tranquillity.

Today the 21 May is Buddha Poornima – the anniversary on the full moon day of Lord Buddha’s birth. He is generally seen seated in a quiet beaming posture emanating goodness and peacefulness. After he obtained enlightenment sitting beneath the bodhi tree, it is said that Buddha remained silent for a few days. When he spoke he simply said silence is the source of life.

Is there anything more that we need to say?

Anticopyright: Editorials and articles originated on TMS may be freely reprinted, disseminated, translated and used as background material, provided an acknowledgement and link to the source, TMS: Thoughts on Silence – on Buddha’s Anniversary, is included. Thank you.