Fukushima: Worse Than a Disaster 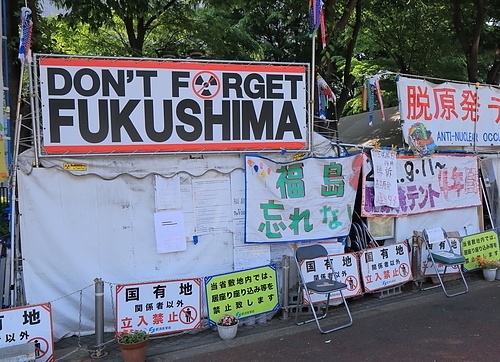 Disasters can be cleaned up.

According to Gregory Jaczko, former head of the U.S. Nuclear Regulatory Commission (NRC), it is not likely the fuel will ever be recovered: “Nobody really knows where the fuel is at this point, and this fuel is still very radioactive and will be for a long time.”

A big part of the problem is that nobody has experience with a Fukushima-type meltdown, which now appears to be 100% meltdown, possibly burrowed into the ground, but nobody really knows for sure.

What’s next is like a trip into The Twilight Zone.

“The absolutely uncontrollable fission of the melted nuclear fuel assemblies continue somewhere under the remains of the station. ’It’s important to find it as soon as possible,’ acknowledged Masuda, admitting that Japan does not yet possess the technology to extract the melted uranium fuel,” (600 Tons of Melted Radioactive Fukushima Fuel Still Not Found, Clean-Up Chief Reveals, RT, May 24, 2016).

Nuclear fission is when atoms split apart into smaller atoms. With nuclear bombs, fission must happen extremely quickly to charge a large explosion whereas, in a nuclear reactor, fission must happen very slowly to make heat, which, in turn, is used to boil water to make steam to turn a turbine to generate electricity.

Even if Masuda’s cleanup crew find the missing 600 tons, which is so highly radioactive that workers cannot even get close enough to inspect the immediate areas, then they need to construct, out-of-midair, the technology to extract it, and then what? It’s guesswork. It’s what modern-day society has been reduced to, guesswork. Toss out rubbing two sticks together and build monstrous behemoths for billions to boil water, and when it goes wrong, guess what to do next. What’s wrong with this picture? Well, to start with, nobody knows what to do when all hell breaks loose.

They do not have the technology to extract it!

In 1986, Russian teams of workers found the melted corium of the Chernobyl Nuclear Power Plant’s reactor core in the facility’s lowest level. Whilst “frying 30 workers” along the way, they contained it just enough to prevent burrowing into the ground, maybe.

During containment work at Chernobyl, a makeshift robotic camera managed to actually photograph the monster, the melted core, nicknamed “the Elephant’s Foot.” Thirty years after the fact, the “Elephant’s Foot” is still lethal.

By way of comparing/contrasting Chernobyl and Fukushima, extraordinarily high radiation zaps and destroys robots at first sight when sent into Fukushima’s containment vessels. It’s kinda like the Daleks in Doctor Who.

Whereas, thirty years after the fact, Chernobyl seems to have found a solution to the elephant’s foot menace to society, but as for Fukushima, they must first locate 600 tons of hot stuff. That may be an impossible task. Then what?

“Thirty years after the Chernobyl nuclear accident, there’s still a significant threat of radiation from the crumbling remains of Reactor 4. But an innovative, €1.5 billion super-structure is being built to prevent further releases, giving an elegant engineering solution to one of the ugliest disasters known to man,” Claire Corkhill, PhD, University of Sheffield, New Tomb Will Make Chernobyl Site Safe for 100 Years, Phys.Org, April 22, 2016.

As it happens, the older collapsing sarcophagus for Chernobyl is being replaced by a brand new enormous steel frame: “Thanks to the sarcophagus, up to 80% of the original radioactive material left after the meltdown remains in the reactor. If it were to collapse, some of the melted core, a lava-like material called corium, could be ejected into the surrounding area in a dust cloud, as a mixture of highly radioactive vapour and tiny particles blown in the wind. The key substances in this mixture are iodine-131, which has been linked to thyroid cancer, and cesium-137, which can be absorbed into the body, with effects ranging from radiation sickness to death depending on the quantity inhaled or ingested,” Ibid

“The Elephant’s Foot could be the most dangerous piece of waste in the world,” (Chernobyl’s Hot Mess, “the Elephant’s Foot,” is Still Lethal, Nautilus, Science Connect, Dec. 4, 2013). It’s a highly charged radioactive massive hunk of goo that will not die or waste away. This could be a Doctor Who script, par excellence! Therein exist the soft underbelly, the vulnerability, and the risks of using nuclear power to boil water, or alternatively, the sun and wind could be used. They’re not radioactive and still much faster than rubbing two sticks together.

Fukushima is three times (3x) Chernobyl, maybe more; however, in Fukushima’s case there’s a distinct possibility that its white-hot sizzling corium has already started burrowing into Earth. Thereafter, let your imagination run wild because nobody has any idea of how that ends, if ever!

But, Einstein knew. Here’s a famous Einstein quote: “The unleashed power of the atom has changed everything save our modes of thinking, and we thus drift toward unparalleled catastrophes.”

Gregory Jackzo, former head of the NRC, ponders the security of nuclear power: “You have to now accept that in all nuclear power plants, wherever they are in the world … that you can have this kind of a very catastrophic accident, and you can release a significant amount of radiation and have a decade long cleanup effort on your hands” (Epoch Times).

Looking ahead a few years, the question remains: Where will the sizzling white-hot melted corium be when the Tokyo Olympics arrive in 2020?

“This debate has dogged him since his Sept. 7 speech to the International Olympic Committee, when he said the nuclear disaster is “under control.” The next day, Tokyo won hosting rights for the 2020 Summer Olympic Games,” (Tsuyoshi Inajjma and Yuriy Humber, Abe Olympic Speech On Fukushima Contradicts Nuclear Plant Design, Bloomberg, Oct. 23, 2013).

“French authorities are investigating payments worth around $2m to a company linked to the son of former world athletics chief Lamine Diack over alleged connections to Japan’s successful bid to host the 2020 Olympic Games,” (Tokyo Olympics Bid Questioned as Prosecutors Probe $2M Payouts, The Financial Times, May 12, 2016).

Japan won the right to host the 2020 Olympics with a bid to spend $5 billion, which is suspiciously small, especially in an historical context. For the record, rival Istanbul’s bid was almost $20 billion, a much more realistic commitment for such a momentous worldly event.

Thusly, with mucho “balls-in-the-air,” one has to wonder if PM Abe’s infamous secrecy law will click into play, in other words, is there any way it can impede investigations? After all, the law allows any Japanese politician to put an offender behind bars for 10 years for breaking state secrets, which are (very embarrassingly) whatever the accuser claims to be “secretive.” After all, prima facie, between Fukushima and the Olympics, there could be a lot of secretive stuff going on behind the scenes.

Japan’s state secrecy law Act on the Protection of Specially Designated Secrets (SDS) Act No. 108 of 2013 passed on the heels of the Fukushima meltdown, is very similar to Japan’s harsh Public Peace and Order Controls of WWII (a real doozy). According to Act No. 108, the “act of leaking itself” is bad enough for prosecution, regardless of what, how, or why. Absolutely, if someone “leaks,” they’re going to “the can.”

Susumu Murakoshi, president of the Japan Federation of Bar Associations dissents: “The law should be abolished because it jeopardizes democracy and the people’s right to know,” Abe’s Secrets Law Undermines Japan’s Democracy, The Japan Times, Dec. 13, 2014.

The Japan Times needs to fact-check the definition of democracy.