3 Jun 2016 – They were marching shoulder-to-shoulder, young and old, in absolute silence. Some were carrying small placards with names and photos of their loved ones, who disappeared four decades ago, during the pro-Western dictatorship here in Uruguay. 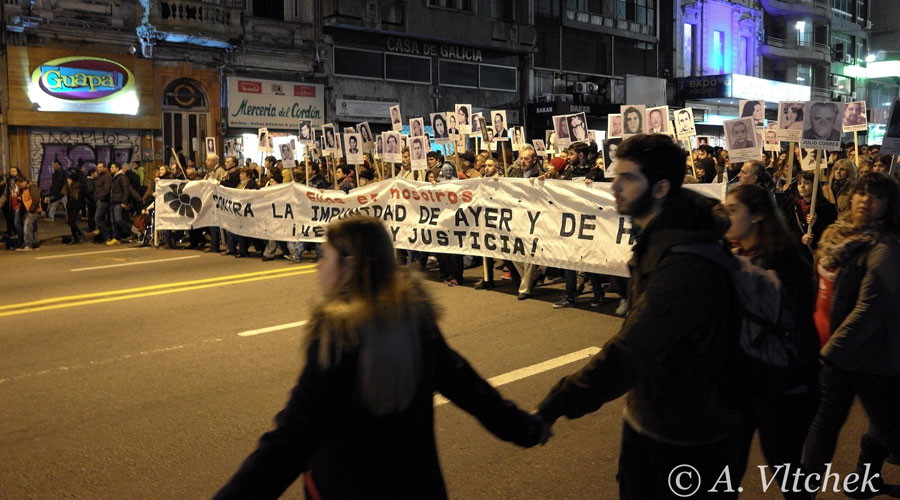 The entire center of Montevideo came to a standstill. Blocks and blocks of this marvelous city were literally inundated by the river consisting of human bodies.

Then, in front of the municipality, the silence was broken. A huge screen above the square lit up, and photographs of each man and woman who disappeared, suddenly emerged, one by one. When no photograph was available, a gray contour was projected on the white screen. Two voices, one of a man, and one of a woman, were reading names of the victims. And the crowd chanted back in unison: “Presente!”

One block further, the “March of Silence” ended. The national anthem of Uruguay resonated across the old city. Some people stood still, in silent salute and reverence, others fell into each other’s arms, weeping openly and uncontrollably.

Uruguay, at least to some extent a socialist country, was still standing. All over the continent, however, left-wing governments were collapsing, under the terrible weight of constitutional coups as well as the media and business manipulations of the ‘elites’ and the Empire.

Argentina was crying out in pain under the neoliberal President Mauricio Macri, while the great Brazilian nation – fooled, cheated and spat at – was just slowly and painfully waking up after the long night of a shameless coup that brought a corrupt lackey and snitch of the West – Michel Temer – to power.

But even in Uruguay, the old establishment was still clinging to power, blocking many essential changes, resisting and silencing the calls for justice.

Around 300 people disappeared in tiny Uruguay during the extreme right-wing dictatorship (1973-85), of course much less than in Argentina or Chile.

“But that is enough. Enough!” An old lady who was holding a placard with the image of her sister told me. “300 are much more than enough. We want justice and truth. Because without those, there could be no real progress in this country.”

One of the posters read:

AGAINST IMPUNITY OF THE PAST AND PRESENT! TRUTH AND JUSTICE!

Other placards were much more explicit:

NO FORGETTING NO FORGIVENESS!

And an even stronger one:

THEY ARE INSIDE US, SHOUTING ‘REVOLUTION!’

“This is so impressive, so touching!” whispers my friend Lilian Soto, a leading Paraguayan left-wing politician and former MP and Presidential candidate. “I have already participated in this march on several occasions. I really love this country!”

I briefly speak to my colleague and comrade from TeleSur, who is covering this great event for the entire Latin America and the world.

This year, after what happened in neighboring Argentina and Brazil, the march is gaining great symbolism. Cuban flags are flying, not far from the great Uruguayan Cinemateque, where my film about the US-backed 1965 coup in Indonesia had been shown, many years ago. In front of the statue of Socrates, a man poses, proudly, wrapped in a huge Brazilian flag. 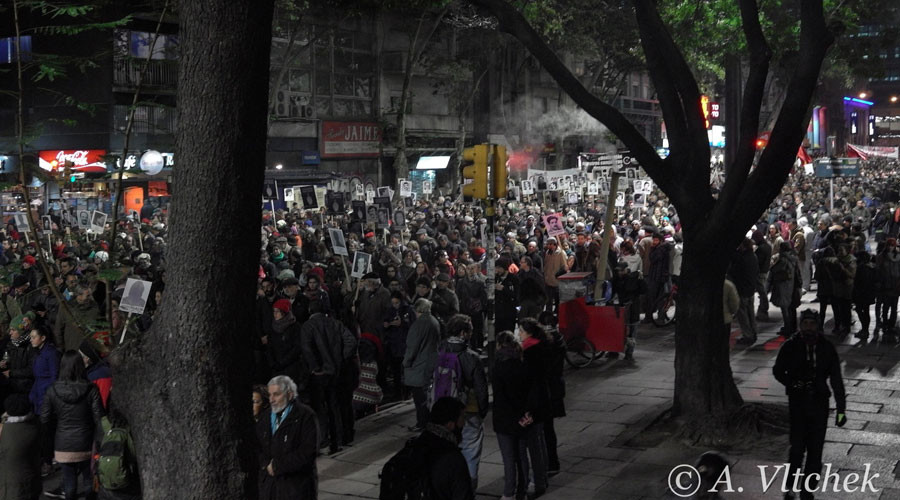 “Those flags were just personal statements by several individuals,” explains my friend, Uruguayan journalist and activist Agustin Fernandez. “The demonstration was still mainly about the crimes committed by our past dictatorship.”

Mainly, yes; but those men and women I spoke to, on the night of 21 May, in the center of Montevideo, appeared to be extremely concerned about the macabre developments shaking the neighboring countries.

In Latin America, as well as all around the world, everything is clearly inter-connected. The West; the Empire, are behind almost all the horrid crimes against the humanity.

A great Greek film director, Costa Gavras, depicted the Uruguayan dictatorship and the Yankee involvement (a story of a US diplomat and expert in torture, who was kidnapped by the Uruguayan resistance group Tupamaros), in his iconic film “State of Siege” (1973).

The US and the West were behind the disappearances and torture in this historically peaceful and democratic country… as they were responsible for the horrors of fascist dictatorships in Chile, Argentina, Brazil and elsewhere… and just as they are accountable for the recent ‘events’ in Argentina and Brazil.

Who said that the US was ‘too busy in the Middle East, while also provoking Russia and China?’ Who said that ‘the Empire finally closed its eyes, stopped looking south?’ It never does! It never sleeps!

Walking down the streets of Montevideo, photographing and talking to the marching masses, on several occasions I was tempted to shout:

Expecting to hear those loud, clear and proud voices replying to me: “Presente!”