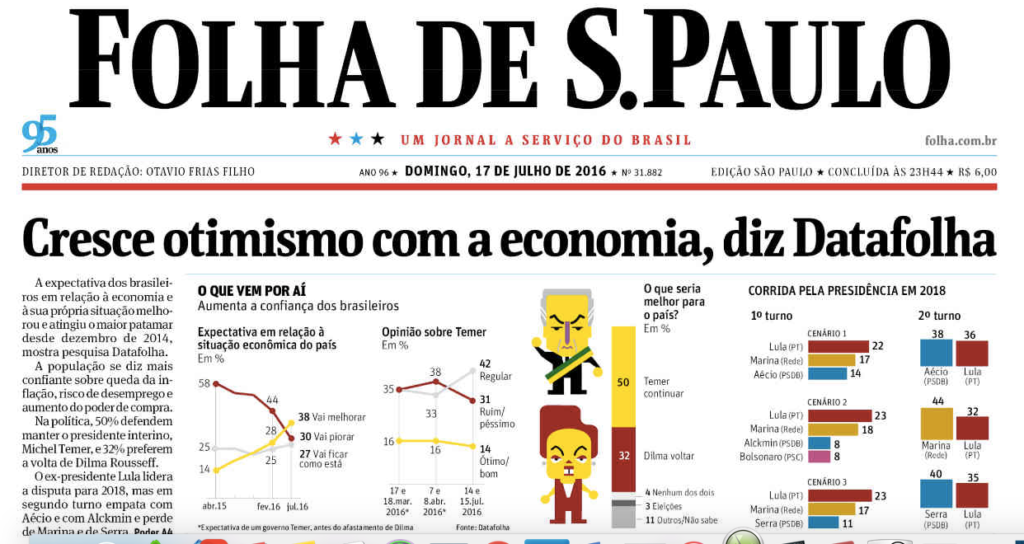 21 Jul 2016 – On Wednesday [20 Jul], The Intercept published an article documenting the extraordinary journalistic fraud committed by Brazil’s largest newspaper, Folha de São Paulo, in radically distorting the views of Brazilians on the key questions of the country’s political crisis. Specifically, Folha blasted headlines to the country announcing that 50 percent of Brazilians now want the extremely unpopular interim president, Michel Temer, to complete Dilma’s term and remain as president through 2018, while only 3 percent favor new elections and only 4 percent want both Dilma and Temer to resign. That was squarely at odds with prior polling showing vast majorities opposed to Temer and favoring new elections. As we documented, the actual polling data — which Folha’s polling firm, Datafolha, only published days after the article — did not remotely support Folha’s claims.

But after our article was published, much more evidence was found — through amazing collaborative work by internet sleuths — showing how extreme Folha’s behavior was, including the discovery of a smoking gun proving that it was much worse than we knew when we published yesterday. Do not let the fact that this story involves polling data and methodologies obscure how significant this episode is:

Weeks before the conclusion of the country’s most virulent political conflict in at least a generation — the final Senate vote on Dilma’s impeachment — Folha, Brazil’s largest and most influential newspaper, not only distorted, but actively concealed, crucial polling data that completely negated what they “reported”: data that establishes that a large majority of Brazilians want “interim President” Michel Temer to resign, not remain in office as the paper claimed. Put simply, this is one of the most remarkable, flagrant, and serious cases of journalistic malfeasance one can imagine.

After our article was published yesterday, the full-scale unraveling of Folha’s story began when Brad Brooks, Reuters’s chief correspondent for Brazil, noted an extraordinary discrepancy: while Folha trumpeted on its front page that only 3 percent of Brazilians want new elections and 50 percent want Temer to stay, the paper’s polling firm, Datafolha, had issued a press release with the published data announcing that 60 percent of Brazilians actually want new elections. Just compare this amazing contradiction: 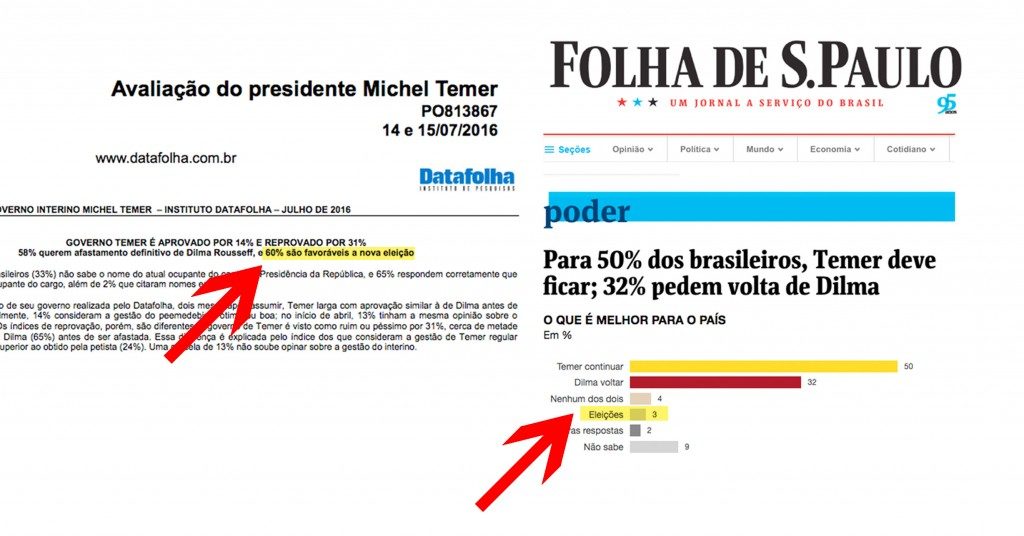 How could this be? We immediately contacted Datafolha to ask this, but by then our story had been picked up by most media outlets in Brazil and became a national controversy, so they were refusing to talk to us further. They just simply would not explain this major discrepancy.

But this discovery led to another towering question: In the underlying questions and data published by Datafolha, there was nothing showing that 60 percent of Brazilians favored new elections, as the firm’s headline described. It was clear that Datafolha only published some of the questions they asked, not all. That’s because the questions were numbered, and the published document only included the questions numbered 7-10, 12-13, and 21. That is not itself uncommon or wrong (newspapers often withhold polling questions on different topics in order to roll out the reporting in stages), but it was bizarre that none of the questions Datafolha published supported or even related to its headline. So where did that 60 percent number — one that directly contradicted Folha’s front-page report — come from?

The answer was discovered through outstanding investigative work by the website Tijolaço. First, led by Fernando Brito, they realized that Datafolha’s published document containing the underlying polling data and questions — the document that we cited in our article to show that Folha’s reporting was false — had a URL that ended with “v2,” which meant that it was the second version of the document published by Datafolha. So they searched for the first version, but it was not on Datafolha’s site. Although the first version had apparently been unpublished by Datafolha, it was still a live link on their server, and, guessing the correct URL, Tijolaço was able to locate and download it.

What they found there — which Datafolha apparently had unpublished — was stunning. It proved that Folha’s story was an absolute journalistic fraud. Included in that first version was Question 14, which asked:

The facts are even worse for Folha (and Temer): The percentage of Brazilians that wants Temer to resign now is certainly much higher even than this 62 percent. That’s because Datafolha’s question asked whether people favor the resignations of both Temer and Dilma. Many of those who answered “no” — as the data breakdown shows — are members of PT (Dilma’s party) and/or want Lula to be president in 2018, which means they answered “no” not because they want Temer to stay, but because they want Dilma to return. So — just as Ibope found in April — it is only a very small minority of the country that wants Temer as their president: the exact opposite of what Folha “reported.”

This was not the only missing data that Tijolaço discovered when they found the first version of the published data. As they explain in a comprehensive account of what they did, there were two full paragraphs written by Datafolha summarizing this vital polling data that were also removed from the published second version, including this sentence: “A majority (62 percent) declared themselves in favor of a new election for the office of president.”

Tijolaço also discovered a separately concealed question — Question 11 — that is the most favorable yet for Dilma on the question of impeachment, which Folha omitted. Datafolha asked:

Only 49 percent said impeachment complies with democratic rules and the Constitution, while 37 percent said it did not. When purporting to describe the views of the country about impeachment, how could Folha possibly conceal this very surprising and significant data?

Last night, Folha published a response in the form of a news article that described what it called the “controversy” provoked by our article. It glided over, and in many cases ignored, most of these key questions.

The Folha article did note that contrary to its own previous claim that only 3 percent of Brazilians want new elections, “the percentage that favors new elections increases to 62 percent when the polling firm asked about this explicitly.” And it included the two questions it had previously kept hidden: one showing that a majority wants Temer to quit, the other showing a large minority viewing impeachment as a violation of democracy (Folha failed to mention that this new data had, in fact, already been published earlier that day by Tijolaço): 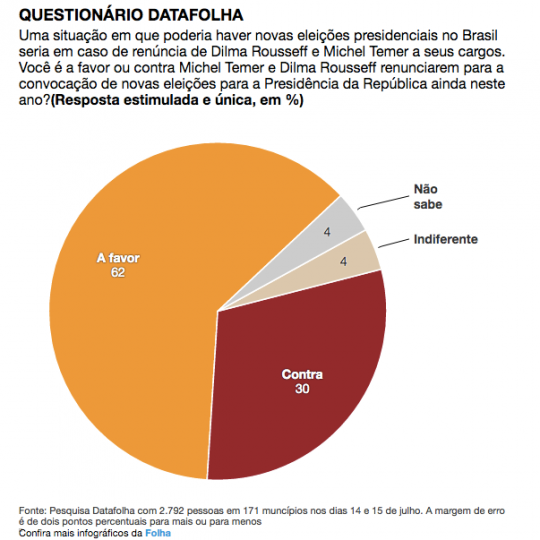 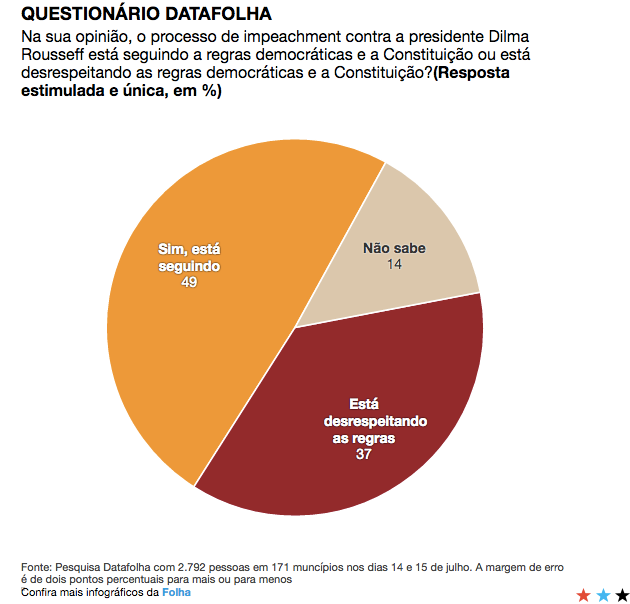 But the paper nonetheless insisted it did nothing wrong by hiding this data. It quoted its own executive editor, Sérgio Dávila, as arguing that it is “the prerogative of the paper to chose what it believes is ‘most journalistically relevant’ when it decides to publish a poll.” Dávila argued that “the question about Dilma and Temer both resigning did not appear particularly noteworthy because it was known from prior polling and because, in the current political landscape, that option is not really considered any longer.”

It’s impossible to overstate how irrational this response is, and how much Folha’s executive editor is counting on the gullibility of his readers. The biggest takeaway by far from Folha’s reporting was that the country is happy to have Temer remain as president through 2018, and only a tiny percentage want new elections. But while Folha reported this, they were holding in their hands the data that proved these claims to be 100 percent false, showing that literally the opposite was true. A large majority of Brazilians want Temer to quit, not remain as president. And a large majority, not a tiny fringe, want new elections.

None of Dávila’s excuses withstand even the slightest scrutiny. If it’s journalistically irrelevant to know what percentage of Brazilians favor new elections, why did Folha have their polling firm ask this? If this question about new elections is irrelevant, why was this data not only included, but prominently highlighted in its headline, by Datafolha in their original release? Why, if this data is irrelevant, did Datafolha publish it originally, only to then unpublish it by posting a second version that excluded it? And how can this data be deemed by Folha to be journalistically irrelevant when it directly contradicts the claims they hyped on their front page that were then amplified by the country’s largest media outlets?

Other media outlets certainly don’t view this data as irrelevant. The Brazilian edition of El Pais last night published a news account with the headline: “62 percent support new elections, according to data that Datafolha now publishes.” The El Pais article casts the story as much a media scandal as it does a political one, as it describes how Folha hid this data until it was found as a result of our story. Indeed, El Pais published a separate story yesterday quoting experts who echoed the ones we interviewed, harshly criticizing Folha for how they misused this polling data.

Most amazingly of all, this was all done in service of denying the need for democracy: deceiving the country into believing that most Brazilians support the person who seized power undemocratically and that there is no need for elections, when in fact the majority of the country wants this “interim president” to quit and new elections to be held to choose the legitimate leader.

As we noted yesterday, it’s impossible to say whether Folha acted with deliberate intent to deceive or with extreme journalistic ineptitude and recklessness, although evidence suggesting the former is certainly more abundant now than it was yesterday. But motives aside, what is now beyond debate is that Folha misled the country in fundamental ways about this generation’s most consequential political conflict and hid from the public vital evidence that they only admitted existed once they got caught red-handed doing all this.