Over the last decade, Israel has demolished over 1,100 Palestinian homes in the West Bank, leaving homeless more than 5,199 people, including at least 2,602 minors. The extensive demolitions are part of a broader Israeli policy of forced transfer. The following speech was delivered at a conference on home demolitions held at the Knesset on July 27, 2016.

Esteemed Members of the Knesset, colleagues from the human rights and diplomatic communities and B’Tselem staff. Thank you for taking the initiative to convene this session and for taking ongoing and important actions in this area.

Nearly 500 people, including 287 minors. One hundred and twenty-five homes. These are the figures for 2015.

Seven hundred and forty people, half of them minors. One hundred and sixty-eight homes. These are the figures for this year, from January through June of 2016.

This total does not include homes that Israel demolished more than once, nor the so-called “punitive demolitions” – i.e., collective punishment that targets the families of perpetrators of attacks. These figures refer only to demolitions that Israel carried out on the cynical grounds that these homes were constructed unlawfully – meanwhile, the reality is that Israel ensures that Palestinians are unable to undertake lawful construction. 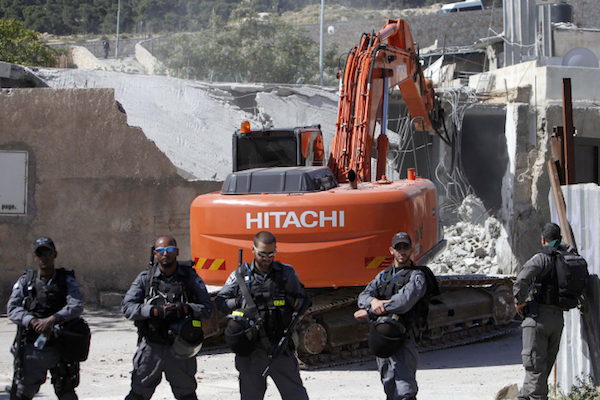 Israeli security forces stand guard after the demolition of a family house built without a municipality permit in the east Jerusalem neighbourhood of Al-Tur on. Photo by Sliman Khader/Flash90

First and foremost, these figures deal with human lives. Lives that Israel ruins, deliberately, as part of a broader strategy designed to dispossess Palestinians from vast areas of the West Bank, to make their lives unbearable until they finally take the hint and move, to move them into smaller concentrated areas, to push them out.

We at B’Tselem present these figures and explain their import to the Israeli public, to you – members of Knesset, and to the world. We show how Israel managed to perfect to a veritable art form the knack of employing bureaucratic mechanisms to promote the big move of dispossessing Palestinians in the West Bank, and to justify it all on administrative and legal grounds. This is organized state violence, and all the Israeli branches of government are party to it, each playing its own role: the planning mechanisms, the military, the Civil Administration, and also the settlers, and last but not least, the courts that serve as the crowning jewel in whitewashing the injustice.

Failure to approve [master] plans; declaring land as firing zones, state land, security areas for settlements, nature reserves, archeological sites – all these actions, individually and taken as a whole, advance the same objective and supply it with the necessary pretexts. This is not a rule of law – it is ongoing, systematic dispossession. The law, the bulldozer, the rulings of the High Court of Justice and orders issued by the Civil Administration are all components of a single operation.

What I’ve just described sounds shocking. It really is quite shocking. But what is no less shocking is that nothing I’ve said is new. Everyone is aware of it and everyone concedes that this is indeed the situation. There are MKs here at the Knesset who advocate for sessions on “promoting law enforcement in cases of unlawful construction by Palestinians in Area C.” They have realized that this is a useful tactic for promoting dispossession and de facto annexation, and they want to step up the pace.

Then, there are many other MKs who are not that keen on those sessions, but nor are they that keen on being here today. They seem to be content with the current rate of dispossession: an average of about 500 people, half of them children, and 100 homes a year, based on the averages of the past decade. This is a fairly accurate reflection of most of the political world and the public in Israel, somewhere between a maintenance upkeep of the occupation and moving it forward at an accelerated pace.

As it happens, these facts are known not only in Israel, and it is not only human rights organizations who are in agreement about this. The world too, the diplomatic community, they are all aware of the figures and all agree as to their significance. What Israel is doing to the Palestinians is known in Jerusalem, Brussels and Washington, and they know what it means. We are grateful to any efforts made to halt this injustice, but the situation must be presented as it is.

Is there currently any meaningful international endeavor underway designed to halt the process I’ve just described? If anyone is at all unsure that the answer is no, that there is no such effort underway, take a look at the figures for demolitions this year: In the first six months of 2016 alone, Israel has already carried out more demolitions than in all of 2015. In fact, unless there is an immediate and complete cessation of these demolitions – and immediate cessation is the only decent and proper option to demand – then 2016 will be crowned as the past decade’s record-holder for demolitions a year. The last record was held by 2013, a year in which Israel demolished 175 homes. As of the end of June this year, there have already been 168 demolitions. (Editor’s note: According to the United Nations, Israel has already demolished 12 more homes in the West Bank since the start of July.)

This might be the one innovation of the present government, which has invented nothing new in this context, but is merely continuing the standard Israeli policy, in the span between more-of-the-same and more-and-more-and-faster-of-the-same, this is certainly a government that has stepped up the pace.

I began by giving the current figures on demolitions. But the actual moment when a home is physically demolished is not the sum total of the dispossession policy. That moment does not take into account all the preceding days, weeks, months and years of living in fear of a demolition that may or may not take place on the morrow, of years of denial of basic development, of not being hooked up to the power grid or running water. Take a moment and try to imagine what life is like under such conditions, of what it’s like to raise a family this way or try to plan for the future. This is no theoretical matter. The figures I spoke of at the start of my talk focus on the thousands of people who have lost their homes. But we must look beyond the mountains of rubble to see the hundreds of thousands who have been living this way for the past generation, or even longer.

“From the time the sun rises, and through to the afternoon, we wait anxiously to see if they’re going to come. Every day that goes by without them coming, I breathe a sigh of relief,” says Rizqiyeh ‘Abd a-Rahman Bani Fadel who lives in Khirbet a-Twayel in the Jordan Valley. This is the way she and her family live: “Even though every passing day brings me closer to the end of my life, I’m very pleased that the day went by without them demolishing my home – this little shed that means we have a roof over our heads.”

We have nothing to be pleased about. Every day of inaction means a green light for continuing this policy. With each dawn, from the time the sun rises every day, whether or not there are demolitions, it is a cruel and immoral policy. We will continue to do our best to carry on fighting this policy, documenting it, telling the truth about it here and elsewhere, everywhere, and to call on people and governments here and abroad to oppose it and bring it to an end, until the occupation is over.

Hagai El-Ad is the executive director of B’Tselem.